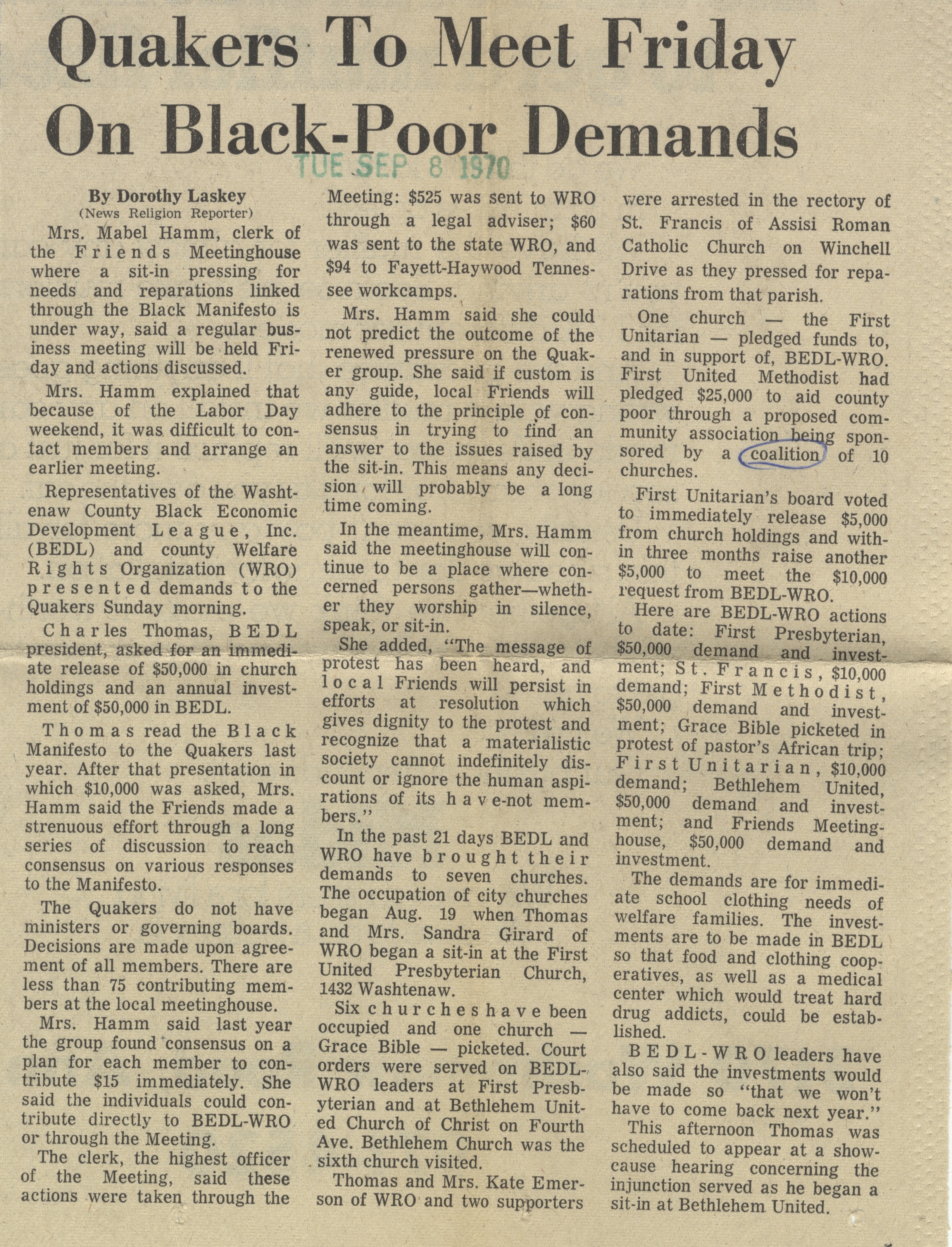 Mrs. Mabel Hamm, clerk of the Friends Meetinghouse where a sit-in pressing for needs and reparations linked through the Black Manifesto is under way, said a regular business meeting will be held Friday and actions discussed.

Mrs. Hamm explained that because of the Labor Day weekend, it was difficult to contact members and arrange an earlier meeting.

Charles Thomas, BEDL president, asked for an immediate release of $50,000 in church holdings and an annual investment of $50,000 in BEDL.

Thomas read the Black Manifesto to the Quakers last year. After that presentation in which $10,000 was asked, Mrs. Hamm said the Friends made a strenuous effort through a long series of discussion to reach consensus on various responses to the Manifesto.

The Quakers do not have ministers or governing boards. Decisions are made upon agreement of all members. There are less than 75 contributing members at the local meetinghouse.

Mrs. Hamm said last year the group found consensus on a plan for each member to contribute $15 immediately. She said the individuals could contribute directly to BEDL-WRO or through the Meeting.

The clerk, the highest officer of the Meeting, said these actions were taken through the Meeting: $525 was sent to WRO through a legal adviser; $60 was sent to the state WRO, and $94 to Fayett-Haywood Tennessee workcamps.

Mrs. Hamm said she could not predict the outcome of the renewed pressure on the Quaker group. She said if custom is any guide, local Friends will adhere to the principle of consensus in trying to find an answer to the issues raised by the sit-in. This means any decision . will probably be a long time coming.

In the meantime, Mrs. Hamm said the meetinghouse will continue to be a place where concerned persons gather—whether they worship in silence, speak, or sit-in.

She added, “The message of protest has been heard, and local Friends will persist in efforts at resolution which gives dignity to the protest and recognize that a materialistic society cannot indefinitely discount or ignore the human aspirations of its have-not members.”

In the past 21 days BEDL and WRO have brought their demands to seven churches. The occupation of city churches began Aug. 19 when Thomas and Mrs. Sandra Girard of WRO began a sit-in at the First United Presbyterian Church, 1432 Washtenaw.

Six churches have been occupied and one church — Grace Bible — picketed. Court orders were served on BEDL-WRO leaders at First Presbyterian and at Bethlehem United Church of Christ on Fourth Ave. Bethlehem Church was the sixth church visited.

Thomas and Mrs. Kate Emerson of WRO and two supporters were arrested in the rectory of St. Francis of Assisi Roman Catholic Church on Winchell Drive as they pressed for reparations from that parish.

One church — the First Unitarian — pledged funds to, and in support of, BEDL-WRO. First United Methodist had pledged $25,000 to aid county poor through a proposed community association being sponsored by a coalition of 10 churches.

First Unitarian’s board voted to immediately release $5,000 from church holdings and within three months raise another $5,000 to meet the $10,000 request from BEDL-WRO.

The demands are for immediate school clothing needs of welfare families. The investments are to be made in BEDL so that food and clothing cooperatives, as well as a medical center which would treat hard drug addicts, could be established.

BEDL-WRO leaders have also said the investments would be made so “that we won’t have to come back next year.”

This afternoon Thomas was scheduled to appear at a show-cause hearing concerning the injunction served as he began a sit-in at Bethlehem United.