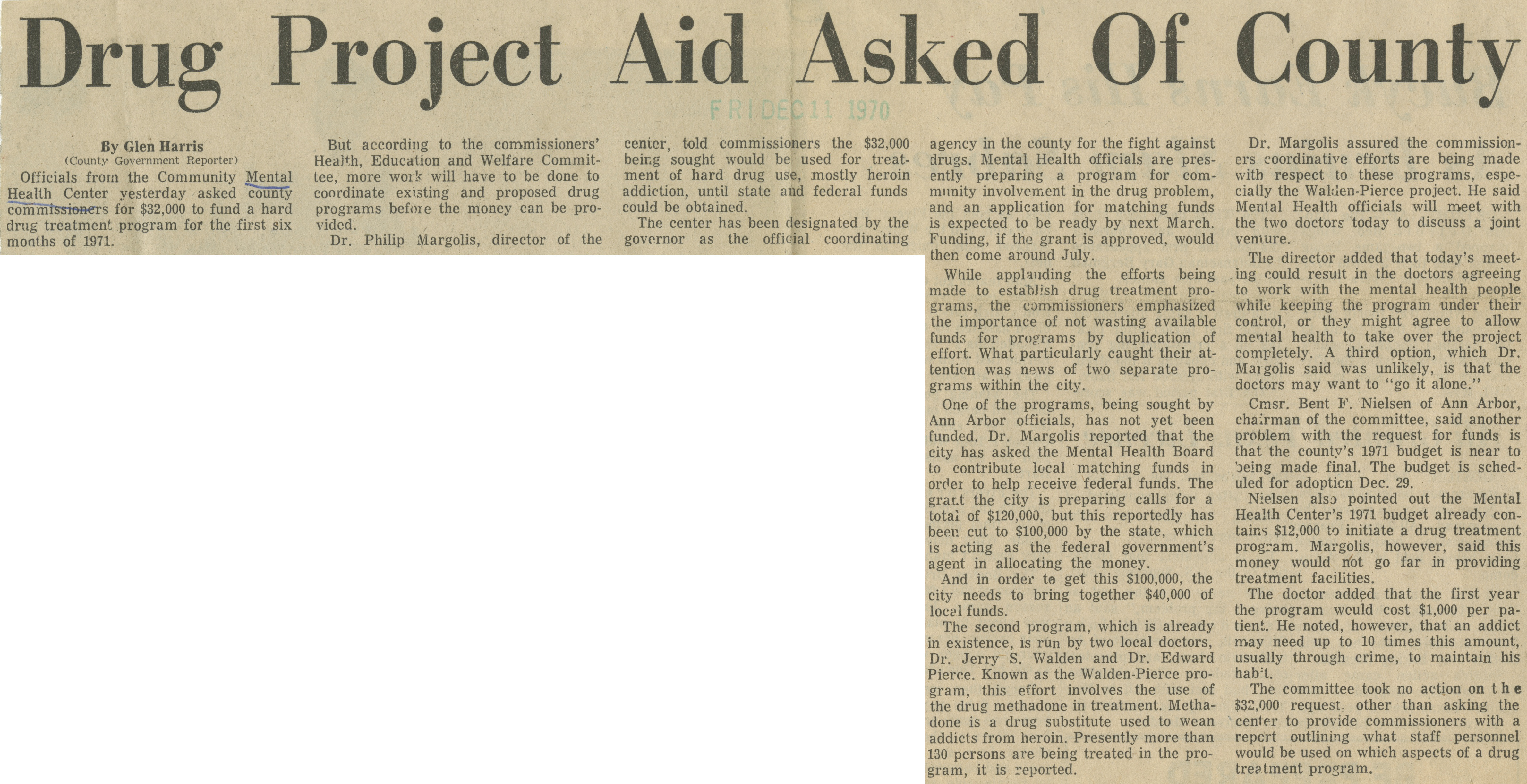 Officials from the Community Mental Health Center yesterday asked "county commissioners for $32,000 to fund a hard drug treatment program for the first six months of 1971.

But according to the commissioners’ Health, Education and Welfare Committee, more work will have to be done to coordinate existing and proposed drug programs before the money can be provided.

Dr. Philip Margolis, director of the center, told commissioners the $32,000 being sought would be used for treatment of hard drug use, mostly heroin addiction, until state and federal funds could be obtained.

The center has been designated by the governor as the official coordinating agency in the county for the fight against drugs. Mental Health officials are presently preparing a program for community involvement in the drug problem, and an application for matching funds is expected to be ready by next March. Funding, if the grant is approved, would then come around July.

While applauding the efforts being made to establish drug treatment programs, the commissioners emphasized the importance of not wasting available funds for programs by duplication of effort. What particularly caught their attention was news of two separate programs within the city.

One of the programs, being sought by Ann Arbor officials, has not yet been funded. Dr. Margolis reported that the city has asked the Mental Health Board to contribute local matching funds in order to help receive federal funds. The grant the city is preparing calls for a total of $120,000, but this reportedly has been cut to $100,000 by the state, which is acting as the federal government’s agent in allocating the money.

The second program, which is already in existence, is run by two local doctors, Dr. Jerry S. Walden and Dr. Edward Pierce. Known as the Walden-Pierce program, this effort involves the use of the drug methadone in treatment. Methadone is a drug substitute used to wean addicts from heroin. Presently more than 130 persons are being treated in the program, it is reported.

Dr. Margolis assured the commissioners coordinative efforts are being made with respect to these programs, especially the Walden-Pierce project. He said Mental Health officials will meet with the two doctors today to discuss a joint venture.

The director added that today’s meeting could result in the doctors agreeing to work with the mental health people while keeping the program under their control, or they might agree to allow mental health to take over the project completely. A third option, which Dr. Margolis said was unlikely, is that the doctors may want to “go it alone.”

Cmsr. Bent F. Nielsen of Ann Arbor, chairman of the committee, said another problem with the request for funds is that the county’s 1971 budget is near to being made final. The budget is scheduled for adoption Dec. 29.

Nielsen also pointed out the Mental Health Center’s 1971 budget already contains $12,000 to initiate a drug treatment program. Margolis, however, said this money would not go far in providing treatment facilities.

The doctor added that the first year the program would cost $1,000 per patient. He noted, however, that an addict may need up to 10 times this amount, usually through crime, to maintain his habit.

The committee took no action on the $32,000 request, other than asking the center to provide commissioners with a report outlining what staff personnel would be used on which aspects of a drug treatment program.