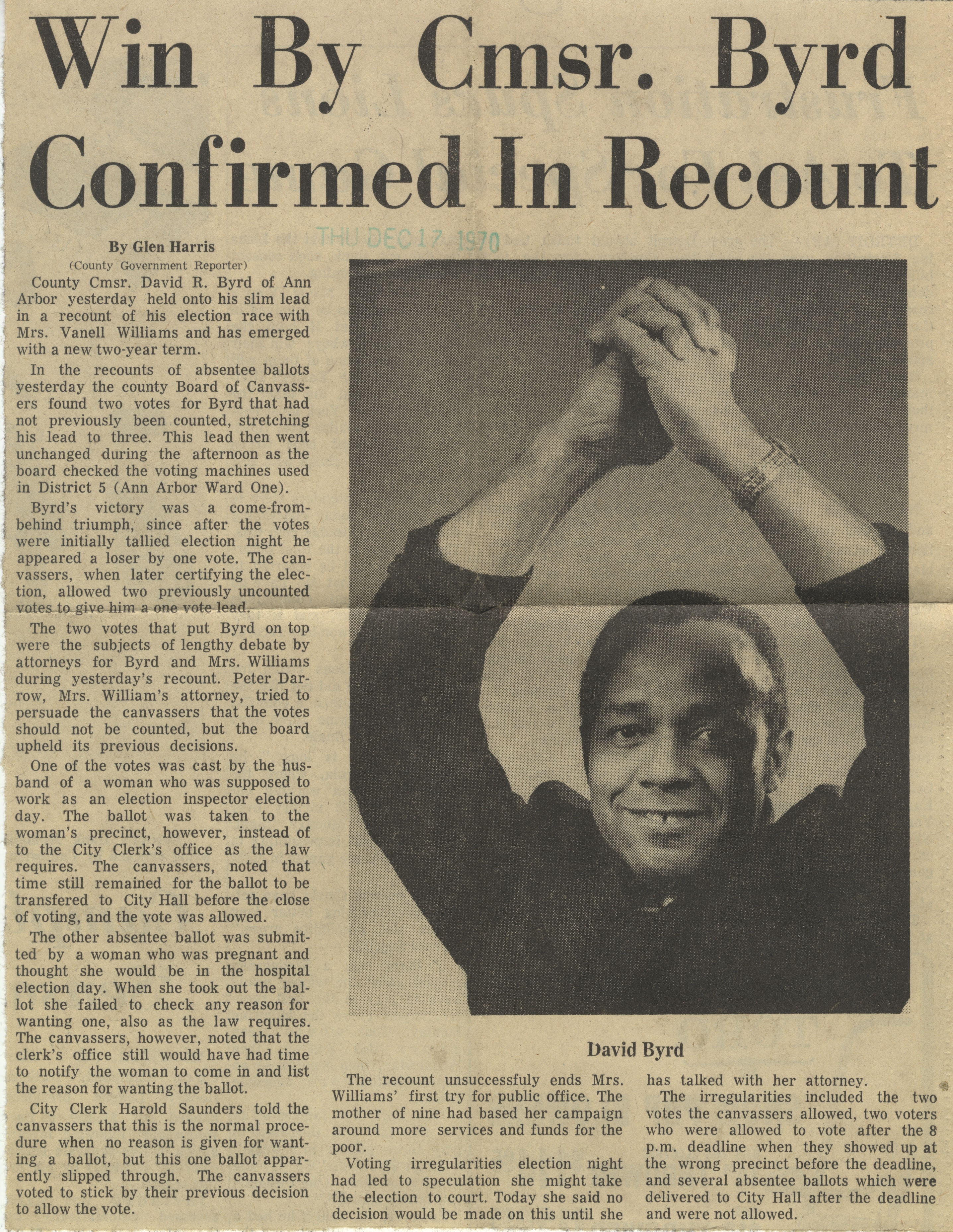 County Cmsr. David R. Byrd of Ann Arbor yesterday held onto his slim lead in a recount of his election race with Mrs. Vanell Williams and has emerged with a new two-year term.

In the recounts of absentee ballots yesterday the county Board of Canvassers found two votes for Byrd that had not previously been counted, stretching his lead to three. This lead then went unchanged during the afternoon as the board checked the voting machines used in District 5 (Ann Arbor Ward One).

Byrd's victory was a come-from-behind triumph, since after the votes were initially tallied election night he appeared a loser by one vote. The canvassers, when later certifying the election, allowed two previously uncounted votes to give him a one vote lead. The two votes that put Byrd on top were the subjects of lengthy debate by attorneys for Byrd and Mrs. Williams during yesterday’s recount. Peter Darrow, Mrs. William’s attorney, tried to persuade the canvassers that the votes should not be counted, but the board upheld its previous decisions.

One of the votes was cast by the husband of a woman who was supposed to work as an election inspector election day. The ballot was taken to the woman’s precinct, however, instead of to the City Clerk’s office as the law requires. The canvassers, noted that time still remained for the ballot to be transferred to City Hall before the close of voting, and the vote was allowed.

The other absentee ballot was submitted by a woman who was pregnant and thought she would be in the hospital election day. When she took out the ballot she failed to check any reason for wanting one, also as the law requires. The canvassers, however, noted that the clerk’s office still would have had time to notify the woman to come in and list the reason for wanting the ballot.

City Clerk Harold Saunders told the canvassers that this is the normal procedure when no reason is given for wanting a ballot, but this one ballot apparently slipped through. The canvassers voted to stick by their previous decision to allow the vote.

The recount unsuccessfully ends Mrs. Williams’ first try for public office. The mother of nine had based her campaign around more services and funds for the poor.

Voting irregularities election night had led to speculation she might take the election to court. Today she said no decision would be made on this until she has talked with her attorney.

The irregularities included the two votes the canvassers allowed, two voters who were allowed to vote after the 8 p.m. deadline when they showed up at the wrong precinct before the deadline, and several absentee ballots which were delivered to City Hall after the deadline and were not allowed.