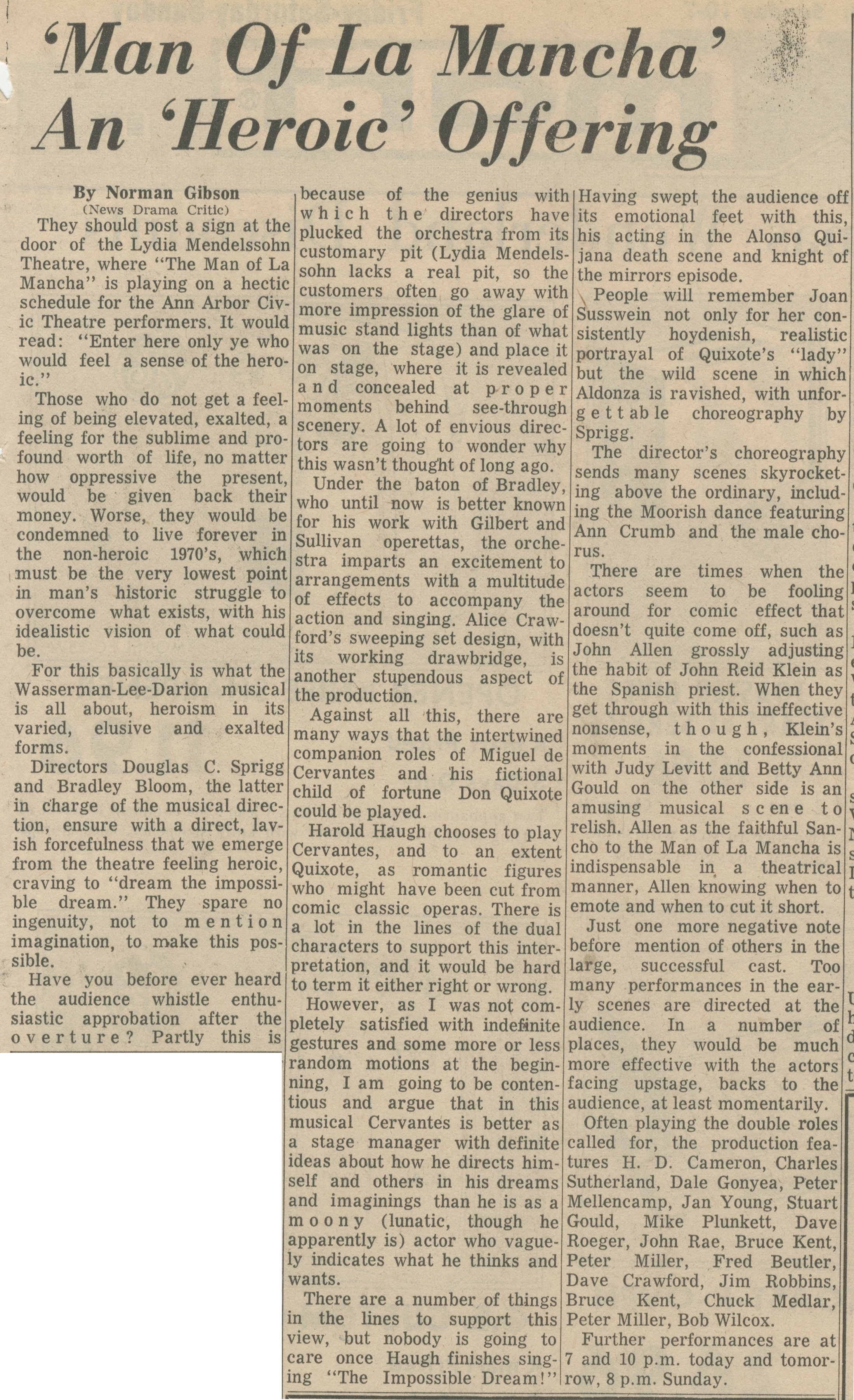 They should post a sign at the door of the Lydia Mendelssohn Theatre, where “The Man of La Mancha” is playing on a hectic schedule for the Ann Arbor Civic Theatre performers. It would read: “Enter here only ye who would feel a sense of the heroic.”

Those who do not get a feeling of being elevated, exalted, a feeling for the sublime and profound worth of life, no matter how oppressive the present, would be given back their money. Worse, they would be condemned to live forever in the non-heroic 1970’s, which must be the very lowest point in man’s historic struggle to overcome what exists, with his idealistic vision of what could be.

For this basically is what the Wasserman-Lee-Darion musical is all about, heroism in its varied, elusive and exalted forms.

Directors Douglas C. Sprigg and Bradley Bloom, the latter in charge of the musical direction, ensure with a direct, lavish forcefulness that we emerge from the theatre feeling heroic, craving to “dream the impossible dream.” They spare no ingenuity, not to mention imagination, to make this possible.

Have you before ever heard the audience whistle enthusiastic approbation after the overture? Partly this is because of the genius with which the directors have plucked the orchestra from its customary pit (Lydia Mendelssohn lacks a real pit, so the customers often go away with more impression of the glare of music stand lights than of what was on the stage) and place it on stage, where it is revealed and concealed at proper moments behind see-through scenery. A lot of envious directors are going to wonder why this wasn’t thought of long ago.

Under the baton of Bradley, who until now is better known for his work with Gilbert and Sullivan operettas, the orchestra imparts an excitement to arrangements with a multitude of effects to accompany the action and singing. Alice Crawford’s sweeping set design, with its working drawbridge, is another stupendous aspect of the production.

Against all this, there are many ways that the intertwined companion roles of Miguel de Cervantes and his fictional child of fortune Don Quixote could be played.

Harold Haugh chooses to play Cervantes, and to an extent Quixote, as romantic figures who might have been cut from comic classic operas. There is a lot in the lines of the dual characters to support this interpretation, and it would be hard to term it either right or wrong.

However, as I was not completely satisfied with indefinite gestures and some more or less random motions at the beginning, l am going to be contentious and argue that in this musical Cervantes is better as a stage manager with definite ideas about how he directs himself and others in his dreams and imaginings than he is as a moony (lunatic, though he apparently is) actor who vaguely indicates what he thinks and wants.

There are a number of things in the lines to support this view, but nobody is going to care once Haugh finishes singing “The Impossible Dream!”

Having swept the audience off its emotional feet with this, his acting in the Alonso Quijana death scene and knight of the mirrors episode.

People will remember Joan Susswein not only for her consistently hoydenish, realistic portrayal of Quixote’s “lady” but the wild scene in which Aldonza is ravished, with unforgettable choreography by Sprigg.

The director’s choreography sends many scenes skyrocketing above the ordinary, including the Moorish dance featuring Ann Crumb and the male chorus.

There are times when the actors seem to be fooling around for comic effect that doesn’t quite come off, such as John Allen grossly adjusting the habit of John Reid Klein as the Spanish priest. When they get through with this ineffective nonsense, though, Klein’s moments in the confessional with Judy Levitt and Betty Ann Gould on the other side is an amusing musical scene to relish. Allen as the faithful Sancho to the Man of La Mancha is indispensable in a theatrical manner, Allen knowing when to emote and when to cut it short.

Just one more negative note before mention of others in the large, successful cast. Too many performances in the early scenes are directed at the audience. In a number of places, they would be much more effective with the actors facing upstage, backs to the audience, at least momentarily.