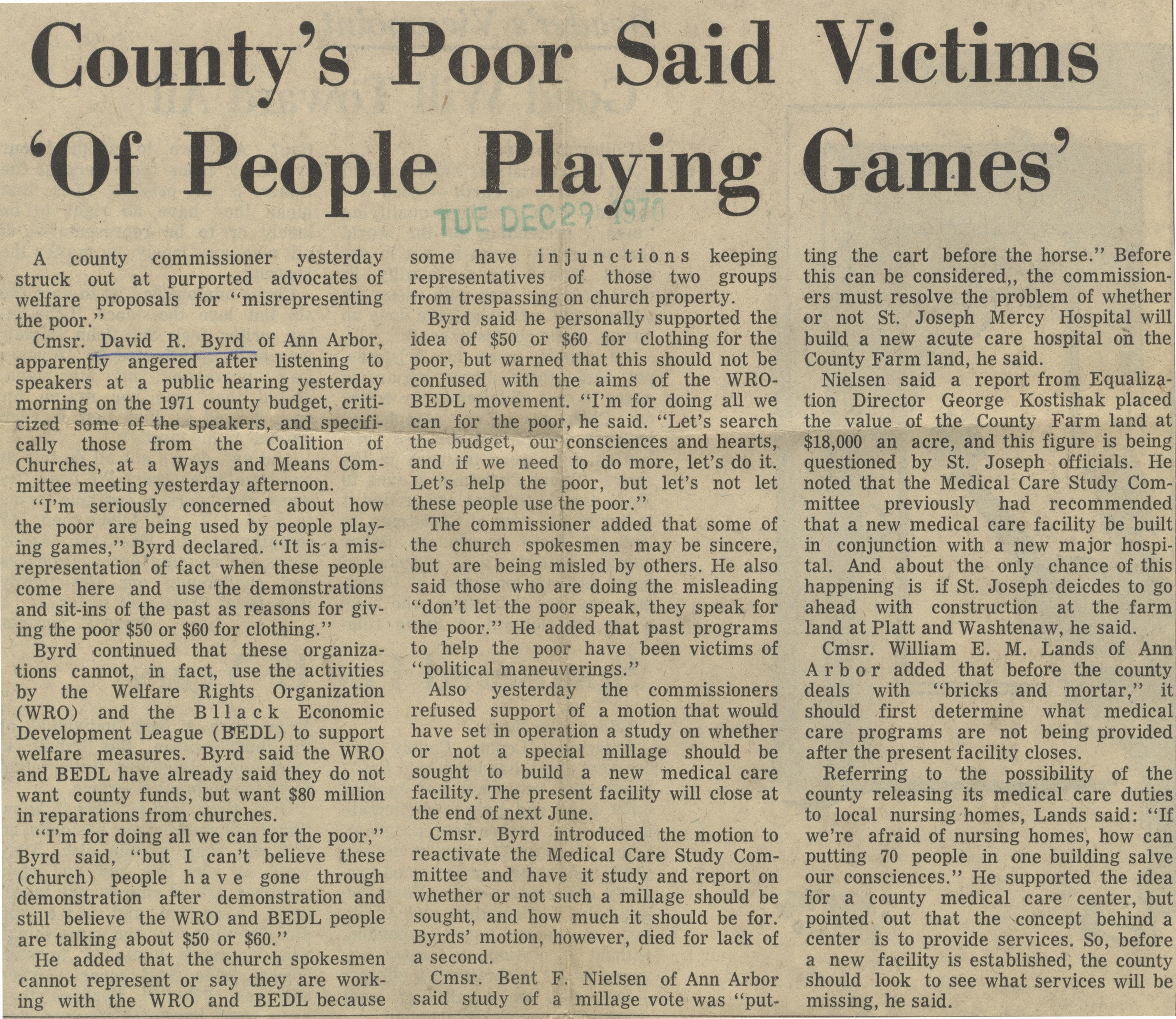 A county commissioner yesterday struck out at purported advocates of welfare proposals for “misrepresenting the poor.”

Cmsr. David R. Byrd of Ann Arbor, apparently angered after listening to speakers at a public hearing yesterday morning on the 1971 county budget, criticized some of the speakers, and specifically those from the Coalition of Churches, at a Ways and Means Committee meeting yesterday afternoon.

“I’m seriously concerned about how the poor are being used by people playing games,” Byrd declared. “It is a misrepresentation of fact when these people come here and use the demonstrations and sit-ins of the past as reasons for giving the poor $50 or $60 for clothing.”

Byrd continued that these organizations cannot, in fact, use the activities by the Welfare Rights Organization (WRO) and the Black Economic Development League (BEDL) to support welfare measures. Byrd said the WRO and BEDL have already said they do not want county funds, but want $80 million in reparations from churches.

“I’m for doing all we can for the poor,” Byrd said, “but I can’t believe these (church) people have gone through demonstration after demonstration and still believe the WRO and BEDL people are talking about $50 or $60.”

He added that the church spokesmen cannot represent or say they are working with the WRO and BEDL because some have injunctions keeping representatives of those two groups from trespassing on church property.

Byrd said he personally supported the idea of $50 or $60 for clothing for the poor, but warned that this should not be confused with the aims of the WRO-BEDL movement. “I’m for doing all we can for the poor, he said. “Let’s search the budget, our consciences and hearts, and if we need to do more, let’s do it. Let’s help the poor, but let’s not let these people use the poor.”

The commissioner added that some of the church spokesmen may be sincere, but are being misled by others. He also said those who are doing the misleading “don’t let the poor speak, they speak for the poor.” He added that past programs to help the poor have been victims of “political maneuverings.”

Also yesterday the commissioners refused support of a motion that would have set in operation a study on whether or not a special millage should be sought to build a new medical care facility. The present facility will close at the end of next June.

Cmsr. Byrd introduced the motion to reactivate the Medical Care Study Committee and have it study and report on whether or not such a millage should be sought, and how much it should be for. Byrds’ motion, however, died for lack of a second.

Cmsr. Bent F. Nielsen of Ann Arbor said study of a millage vote was “putting the cart before the horse.” Before this can be considered, the commissioners must resolve the problem of whether or not St. Joseph Mercy Hospital will build a new acute care hospital oh the County Farm land, he said.

Nielsen said a report from Equalization Director George Kostishak placed the value of the County Farm land at $18,000 an acre, and this figure is being questioned by St. Joseph officials. He noted that the Medical Care Study Committee previously had recommended that a new medical care facility be built in conjunction with a new major hospital. And about the only chance of this happening is if St. Joseph decides to go ahead with construction at the farm land at Platt and Washtenaw, he said.

Cmsr. William E. M. Lands of Ann Arbor added that before the county deals with “bricks and mortar,” it should first determine what medical care programs are not being provided after the present facility closes.

Referring to the possibility of the county releasing its medical care duties to local nursing homes, Lands said: “If we’re afraid of nursing homes, how can putting 70 people in one building salve our consciences.” He supported the idea for a county medical care center, but pointed out that the concept behind a center is to provide services. So, before a new facility is established, the county should look to see what services will be missing, he said.