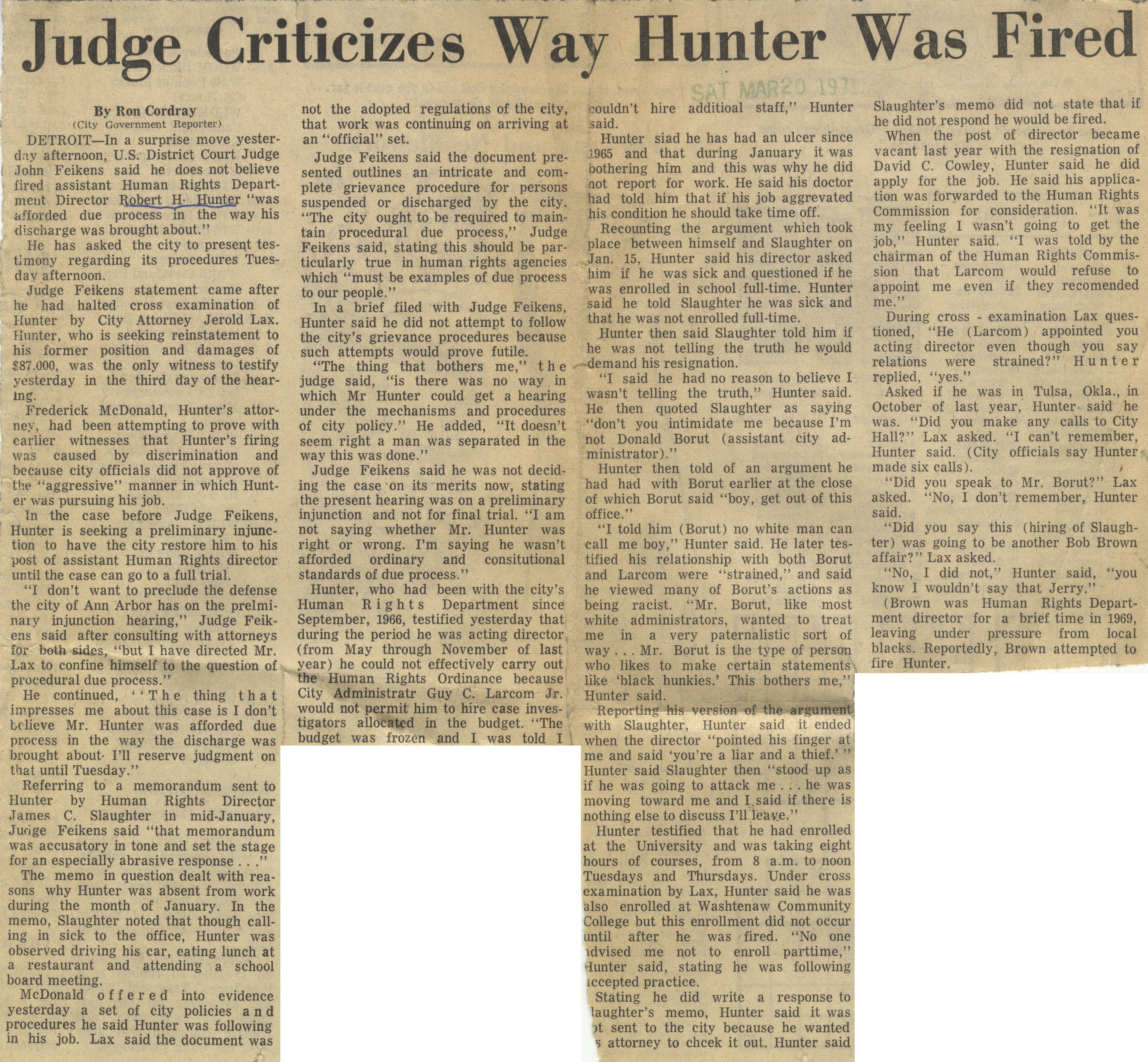 He has asked the city to present testimony regarding its procedures Tuesday afternoon.

Judge Feikens statement came after he had halted cross examination of Hunter by City Attorney Jerold Lax. Hunter, who is seeking reinstatement to his former position and damages of $87,000, was the only witness to testify yesterday in the third day of the hearing.

Frederick McDonald, Hunter’s attorney, had been attempting to prove with earlier witnesses that Hunter’s firing was caused by discrimination and because city officials did not approve of the “aggressive” manner in which Hunter was pursuing his job.

in the case before Judge Feikens, Hunter is seeking a preliminary injunction to have the city restore him to his post of assistant Human Rights director until the case can go to a full trial.

“I don't want to preclude the defense the city of Ann Arbor has on the prelmi-naiy injunction hearing,” Judge Feikens said after consulting with attorneys for both sides, “but I have directed Mr. Lax to confine himself to the question of procedural due process.”

He continued, ‘‘The thing that impresses me about this case is I don’t believe Mr. Hunter was afforded due process in the way the discharge was brought about - I’ll reserve judgment on that until Tuesday.”

Referring to a memorandum sent to Hunter by Human Rights Director James C. Slaughter in mid-January, Judge Feikens said “that memorandum was accusatory in tone and set the stage for an especially abrasive response ...” The memo in question dealt with reasons why Hunter was absent from work during the month of January. In the memo, Slaughter noted that though calling in sick to the office, Hunter was observed driving his car, eating lunch at a restaurant and attending a school board meeting.

McDonald offered into evidence yesterday a set of city policies and procedures he said Hunter was following in his job. Lax said the document was not the adopted regulations of the city, that work was continuing on arriving at an “official” set.

Judge Feikens said the document presented outlines an intricate and complete grievance procedure for persons suspended or discharged by the city. “The city ought to be required to maintain procedural due process,” Judge Feikens said, stating this should be particularly true in human rights agencies which "must be examples of due process to our people.”

In a brief filed with Judge Feikens, Hunter said he did not attempt to follow the city’s grievance procedures because such attempts would prove futile.

“The thing that bothers me,” the judge said, “is there was no way in which Mr Hunter could get a hearing under the mechanisms and procedures of city policy.” He added, “It doesn’t seem right a man was separated in the way this was done.”

Judge Feikens said he was not deciding the case on its merits now, stating the present hearing was on a preliminary injunction and not for final trial. “I am not saying whether Mr. Hunter was right or wrong. I’m saying he wasn’t afforded ordinary and constitutional standards of due process.”

Hunter, who had been with the city’s Human Rights Department since September, 1966, testified yesterday that during the period he was acting director, (from May through November of last year) he could not effectively carry out the Human Rights Ordinance because City Administrator Guy C. Larcom Jr. would not permit him to hire case investigators allocated in the budget. “The budget was frozen and I was told I couldn't hire additioal staff,” Hunter said.

Hunter said he has had an ulcer since 1965 and that during January it was bothering him and this was why he did not report for work. He said his doctor had told him that if his job aggravated his condition he should take time off.

Hunter then said Slaughter told him if he was not telling the truth he would demand his resignation.

“I said he had no reason to believe I wasn’t telling the truth,” Hunter said. He then quoted Slaughter as saying "don’t you intimidate me because I’m not Donald Borut (assistant city administrator).”

Hunter then told of an argument he had had with Borut earlier at the close of which Borut said “boy, get out of this office.”

“I told him (Borut) no white man can call me boy,” Hunter said. He later testified his relationship with both Borut and Larcom were “strained,” and said he viewed many of Borut’s actions as being racist. “Mr. Borut, like most white administrators, wanted to treat me in a very paternalistic sort of way . . . Mr. Borut is the type of person who likes to make certain statements, like ‘black hunkies.’ This bothers me,” Hunter said.

with Slaughter, Hunter said it ended when the director “pointed his finger at me and said ‘you’re a liar and a thief.’ ” Hunter said Slaughter then “stood up as if he was going to attack me ... he was moving toward me and I said if there is nothing else to discuss I'll leave.”

Hunter testified that he had enrolled at the University and was taking eight hours of courses, from 8 a.m. to noon Tuesdays and Thursdays. Under cross examination by Lax, Hunter said he was also enrolled at Washtenaw Community College but this enrollment did not occur until after he was fired. “No one advised me not to enroll parttime,” Hlunter said, stating he was following accepted practice.

Stating he did write a response to Slaughter’s memo, Hunter said it was not sent to the city because he wanted his attorney to check it out. Hunter said Slaughter's memo did not state that if he did not respond he would be fired.

When the post of director became vacant last year with the resignation of David C. Cowley, Hunter said he did apply for the job. He said his application was forwarded to the Human Rights Commission for consideration. “It was my feeling I wasn’t going to get the job,” Hunter said. “I was told by the chairman of the Human Rights Commission that Larcom would refuse to appoint me even if they recommended me."

During cross-examination Lax questioned, “He (Larcom) appointed you acting director even though you say relations were strained?” Hunter replied, “yes."

Asked if he was in Tulsa, Okla., in October of last year, Hunter said he was. “Did you make any calls to City Hall?” Lax asked. “I can’t remember, Hunter said. (City officials say Hunter-made six calls).

“Did you say this (hiring of Slaughter) was going to be another Bob Brown affair?" Lax asked.

(Brown was Human Rights Department director for a brief time in 1969, leaving under pressure from local blacks. Reportedly, Brown attempted to fire Hunter.)