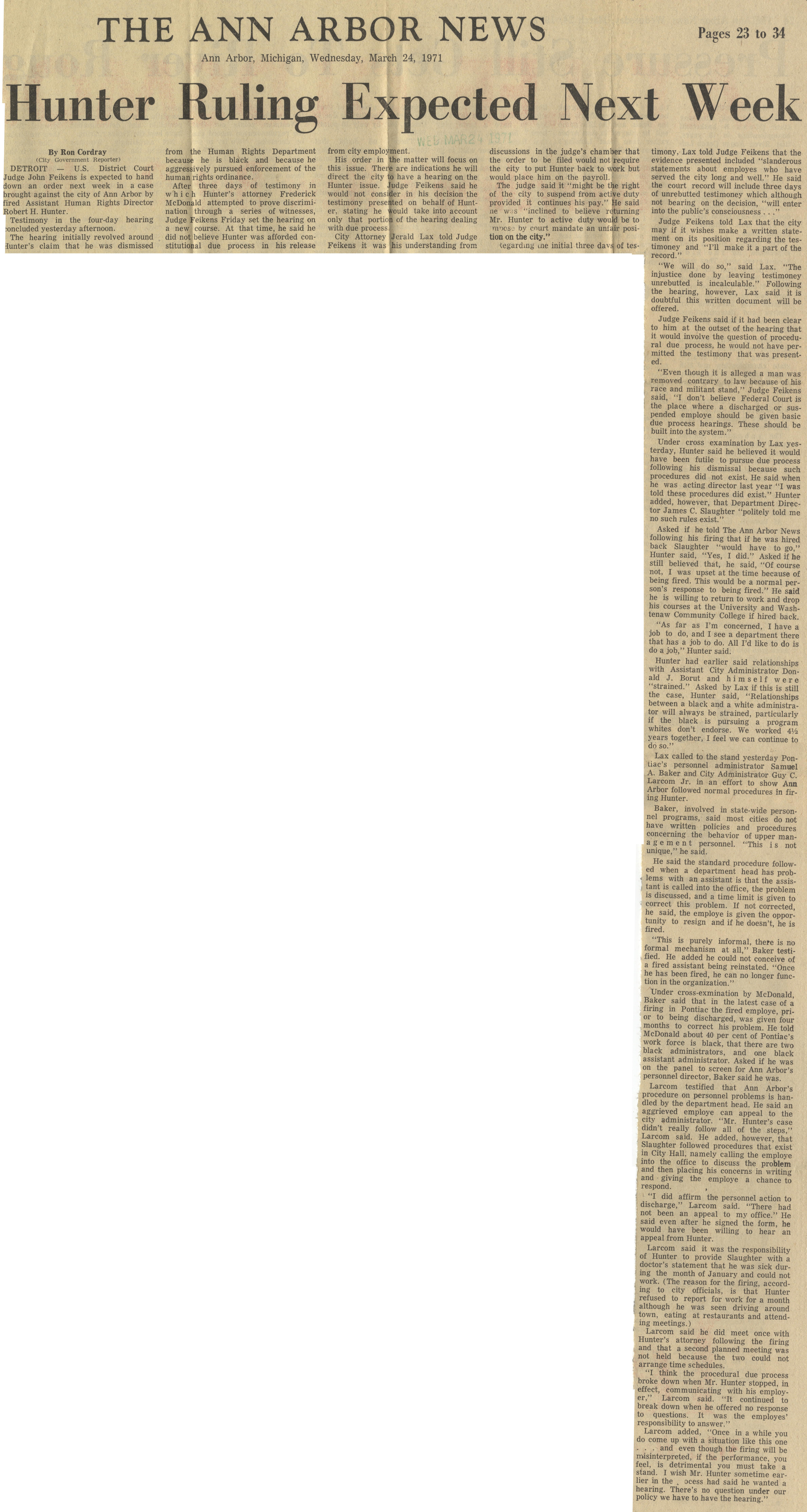 DETROIT — U.S. District Court Judge John Feikens is expected to hand down an order next week in a case brought against the city of Ann Arbor by Assistant Human Rights Director Robert H. Hunter.

The hearing initially revolved around Hunter's claim that he was dismissed

from the Human Rights Department because he is black and because he aggressively pursued enforcement of the human rights ordinance.

After three days of testimony in which Hunter’s attorney Frederick McDonald attempted to prove discrimination through a series of witnesses, Judge Feikens Friday set the hearing on a new course. At that time, he said he did not believe Hunter was afforded constitutional due process in his release

His order in the matter will focus on this issue. There are indications he will direct the city to have a hearing on the Hunter issue. Judge Feikens said he would not consider in his decision the testimony presented on behalf of Hunter, stating he would take into account only that portion of the hearing dealing with due process.

discussions in the judge’s chamber that the order to be filed would not require the city to put Hunter back to work but would place him on the payroll.

The judge said it “might be the right of the city to suspend from active duty provided it continues his pay." He said he was “inclined to believe returning Mr. Hunter to active duty would be to impose by court mandate an unfair position on the city.”

Regarding the initial three days of tes-

timony, Lax told Judge Feikens that the evidence presented included “slanderous statements about employes who have served the city long and well.” He said the court record will include three days of unrebutted testimoney which although not bearing on the decision, “will enter into the public’s consciousness . ..”

Judge Feikens told Lax that the city may if it wishes make a written statement on its position regarding the testimoney and “I’ll make it a part of the record."

“We will do so,” said Lax. "The injustice done by leaving testimoney unrebutted is incalculable." Following the hearing, however. Lax said it is doubtful this written document will be offered.

Judge Feikens said if it had been clear to him at the outset of the hearing that it would involve the question of procedural due process, he would not have permitted the testimony that was presented.

“Even though it is alleged a man was removed contrary to law because of his race and militant stand,” Judge Feikens said, "I don’t believe Federal Court is the place where a discharged or suspended employe should be given basic due process hearings. These should be built into the system.”

Under cross examination by Lax yesterday, Hunter said he believed it would have been futile to pursue due process following his dismissal because such procedures did not exist. He said when he was acting director last year “I was told these procedures did exist.” Hunter added, however, that Department Director James C. Slaughter “politely told me no such rules exist.”

Asked if he told The Ann Arbor News following his firing that if he was hired back Slaughter “would have to go,” Hunter said, "Yes, I did.” Asked if he still believed that, he said, “Of course not, I was upset at the time because of being fired. This would be a normal person's response to being fired.” He said he is willing to return to work and drop his courses at the University and Washtenaw Community College if hired back.

“As far as I’m concerned, I have a job to do, and I see a department there that has a job to do. All I’d like to do is do a job,” Hunter said.

Hunter had earlier said relationships with Assistant City Administrator Donald J. Borut and himself were “strained.” Asked by Lax if this is still the case, Hunter said, "Relationships between a black and a white administrator will always be strained, particularly if the black is pursuing a program whites don’t endorse. We worked 4 1/2 years together, I feel we can continue to do so.”

Baker, involved in state wide personnel programs, said most cities do not have written policies and procedures concerning the behavior of upper management personnel. “This is not unique,” he said.

He said the standard procedure followed when a department head has problems with an assistant is that the assistant is called into the office, the problem is discussed, and a time limit is given to correct this problem. If not corrected, he said, the employe is given the opportunity to resign and if he doesn’t, he is fired.

“This is purely informal, there is no formal mechanism at all,” Baker testified. He added he could not conceive of a fired assistant being reinstated. “Once he has been fired, he can no longer function in the organization.”

Under cross-exmination by McDonald, Baker said that in the latest case of a firing in Pontiac the fired employe, prior to being discharged, was given four months to correct his problem. He told McDonald about 40 per cent of Pontiac's work force is black, that there are two black administrators, and one black assistant administrator. Asked if he was on the panel to screen for Ann Arbor’s personnel director, Baker said he was.

Larcom testified that Ann Arbor’s procedure on personnel problems is handled by the department head. He said an aggrieved employe can appeal to the city administrator. “Mr. Hunter’s case didn’t really follow all of the steps,” Larcom said. He added, however, that Slaughter followed procedures that exist in City Hall, namely calling the employe into the office to discuss the problem and then placing his concerns in writing and giving the employe a chance to respond.

“I did affirm the personnel action to discharge,” Larcom said. "There had not been an appeal to my office.” He said even after he signed the form, he would have been willing to hear an appeal from Hunter.

Larcom said it was the responsibility of Hunter to provide Slaughter with a doctor’s statement that he was sick during the month of January and could not work. (The reason for the firing, according to city officials, is that Hunter refused to report for work for a month although he was seen driving around town, eating at restaurants and attending meetings.)

Larcom said he did meet once with Hunter’s attorney following the firing and that a second planned meeting was not held because the two could not arrange time schedules.

“I think the procedural due process broke down when Mr. Hunter stopped, in effect, communicating with his employer,” Larcom said. "It continued to break down when he offered no response to questions. It was the employes’ responsibility to answer.”

Larcom added, “Once in a while you do come up with a situation like this one . . . and even though the firing will be misinterpreted, if the performance, you feel, is detrimental you must take a stand. I wish Mr. Hunter sometime earlier in the process had said he wanted a hearing. There’s no question under our policy we have to have the hearing.”