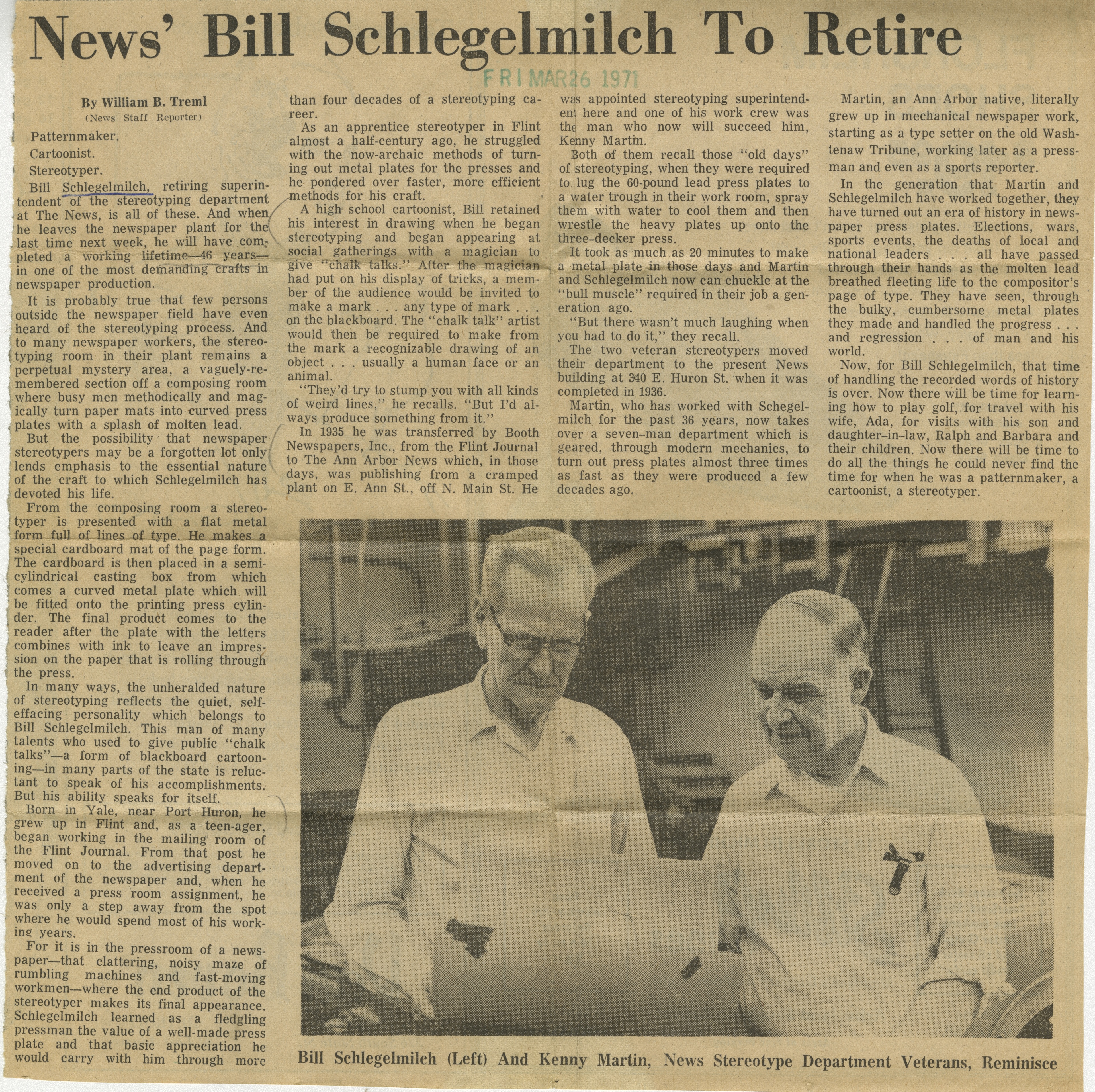 Bill Schlegelmilch, retiring superintendent of the stereotyping department at the News, is all of these. And when he leaves the newspaper plant for the last time next week, he will have completed a working lifetime -- 46 years -- in one of the most demanding crafts in newspaper production.

It is probably true that few persons outside the newspaper field have even heard of the stereotyping process. And to many newspaper workers, the stereotyping room in their plant remains a perpetual mystery area, a vaguely-remembered section off a composing room where busy men methodically and magically turn paper mats into curved press plates with a splash of molten lead.

But the possibility that newspaper stereotypers may be a forgotten lot only lends emphasis to the essential nature of the craft to which Schlegelmilch has devoted his life.

From the composing room a stereotyper is presented with a flat metal form full of-lines-of type. He makes a special cardboard mat of the page form. The cardboard is then placed in a semi-cylindrical casting box from which comes a curved metal plate which will be fitted onto the printing press cylinder. The final product comes to the reader after the plate with the letters combines with ink to leave an impression on the paper that is rolling through the press.

In many ways, the unheralded nature of stereotyping reflects the quiet, self-effacing personality which belongs to Bill Schlegelmilch. This man of many talents who used to give public “chalk talks”—a form of blackboard cartooning—in many parts of the state is reluctant to speak of his accomplishments. But his ability speaks for itself.

Born in Yale, near Port Huron, he grew up in Flint and, as a teen-ager, began working in the mailing room of the Flint Journal. From that post he moved on to the advertising department of the newspaper and, when he received a press room assignment, he was only a step away from the spot where he would spend most of his working years.

For it is in the pressroom of a newspaper—-that clattering, noisy maze of rumbling machines and fast-moving workmen—where the end product of the stereotyper makes its final appearance. Schlegelmilch learned as a fledgling pressman the value of a well-made press plate and that basic appreciation he would carry with him through more than four decades of a stereotyping career.

As an apprentice stereotyper in Flint almost a half-century ago, he struggled with the now-archaic methods of turning out metal plates for the presses and he pondered over faster, more efficient methods for his craft.

A high school cartoonist, Bill retained his interest in drawing when he began stereotyping and when he began appearing at social gatherings with a magician to give "chalk talks." After the magician had put on his display of tricks, a member of the audience would be invited to make a mark . . . any type of mark . . . on the blackboard. The “chalk talk” artist would then be required to make from the mark a recognizable drawing of an object . . . usually a human face or an animal.

“They’d try to stump you with all kinds of weird lines,” he recalls. “But I'd always produce something from it.”

In 1935 he was transferred by Booth Newspapers, Inc., from the Flint Journal to The Ann Arbor News which, in those days, was publishing from a cramped plant on E. Ann St., off N. Main St. He was appointed stereotyping superintendent here and one of his work crew was the man who now will succeed him, Kenny Martin.

Both of them recall those “old days” of stereotyping, when they were required to. lug the 60-pound lead press plates to a water trough in their work room, spray them with water to cool them and then wrestle the heavy plates up onto the three-decker press.

It took as much as 20 minutes to make a metal plate in those days and Martin and Schlegelmilch now can chuckle at the “bull muscle” required in their job a generation ago.

“But there wasn’t much laughing when you had to do it,” they recall.

The two veteran stereotypers moved their department to the present News building at 340 E. Huron St. when it was completed in 1936.

Martin, who has worked with Schegelmilch. for the past 36 years, now takes over a seven-man department which is geared, through modern mechanics, to turn out press plates almost three times as fast as they were produced a few decades ago.

Martin, an Ann Arbor native, literally grew up in mechanical newspaper work, starting as a type setter on the old Washtenaw Tribune, working later as a pressman and even as a sports reporter.

In the generation that Martin and Schlegelmilch have worked together, they have turned out an era of history in newspaper press plates. Elections, wars, sports events, the deaths of local and national leaders ... all have passed through their hands as the molten lead breathed fleeting life to the compositor's page of type. They have seen, through the bulky, cumbersome metal plates they made and handled the progress . . . and regression ... of man and his world.

Now, for Bill Schlegelmilch, that time of handling the recorded words of history is over. Now there will be time for learning how to play golf, for travel with his wife, Ada, for visits with his son and daughter-in-law, Ralph and Barbara and their children. Now there will be time to do all the things he could never find the time for when he was a patternmaker, a cartoonist, a stereotyper.