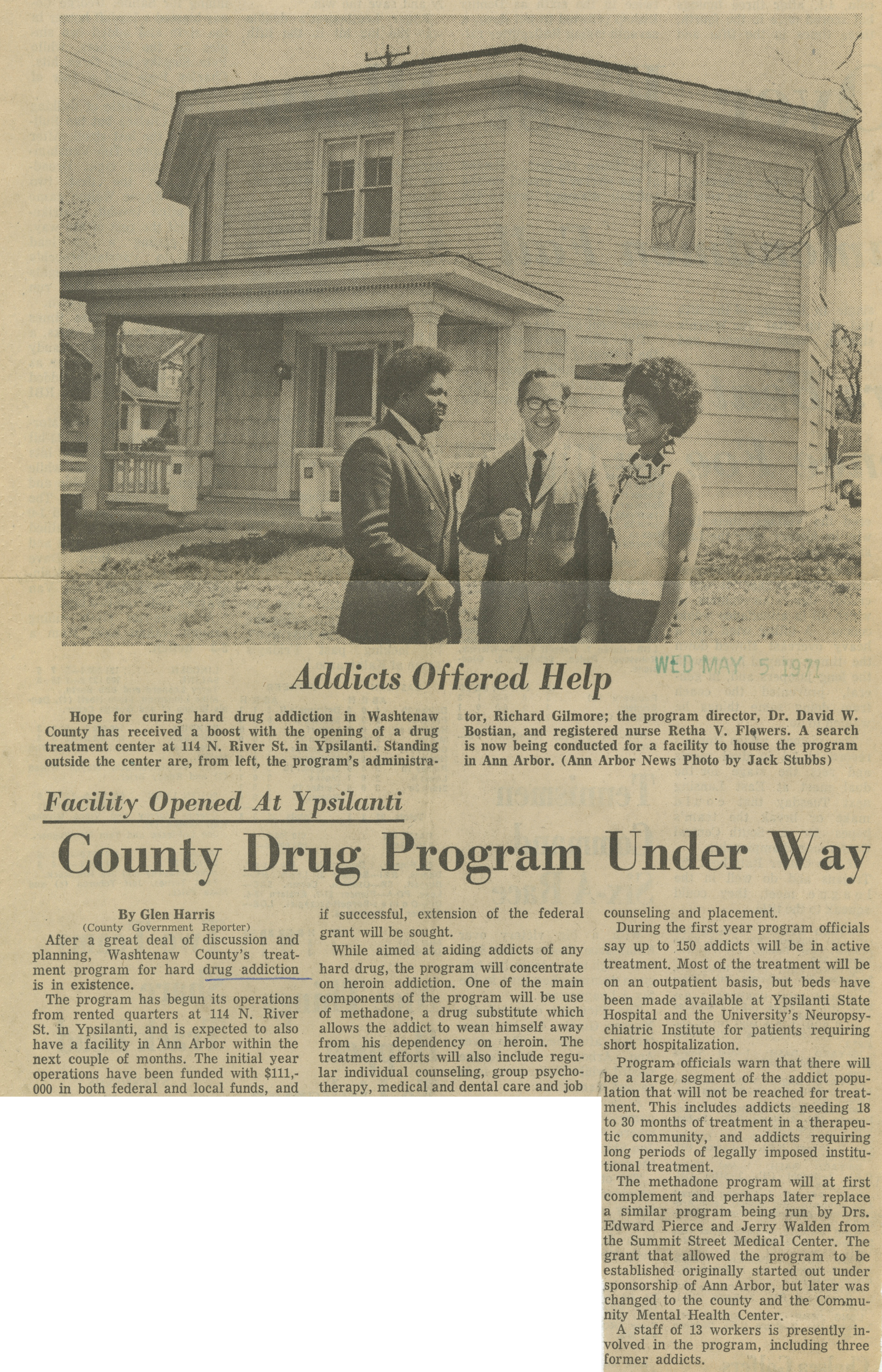 Hope for curing hard drug addiction in Washtenaw County has received a boost with the opening of a drug treatment center at 114 N. River St. in Ypsilanti. Standing outside the center are, from left, the program’s administrator, Richard Gilmore; the program director, Dr. David W. Bostian, and registered nurse Retha V. Flowers. A search is now being conducted for a facility to house the program in Ann Arbor. (Ann Arbor News Photo by Jack Stubbs)

After a great deal of discussion and planning, Washtenaw County’s treatment program for hard drug addiction is in existence.

The program has begun its operations from rented quarters at 114 N. River St. in Ypsilanti, and is expected to also have a facility in Ann Arbor within the next couple of months. The initial year operations have been funded with $111,000 in both federal and local fends, and if successful, extension of the federal grant will be sought.

While aimed at aiding addicts of any hard drug, the program will concentrate on heroin addiction. One of the main components of the program will be use of methadone, a drug substitute which allows the addict to wean himself away from his dependency on heroin. The treatment efforts will also include regular individual counseling, group psychotherapy, medical and dental care, and job counseling and placement.

During the first year program officials say up to 150 addicts will be in active treatment. Most of the treatment will be on an outpatient basis, but beds have been made available at Ypsilanti State Hospital and the University’s Neuropsychiatric Institute for patients requiring short hospitalization.

Program officials warn that there will be a large segment of the addict population that will not be reached for treatment. This includes addicts needing 18 to 30 months of treatment in a therapeutic community, and addicts requiring long periods of legally imposed institutional treatment.

The methadone program will at first complement and perhaps later replace a similar program being run by Drs. Edward Pierce and Jerry Walden from the Summit Street Medical Center. The grant that allowed the program to be established originally started out under sponsorship of Ann Arbor, but later was changed to the county and the Community Mental Health Center.

A staff of 13 workers is presently involved in the program, including three former addicts.