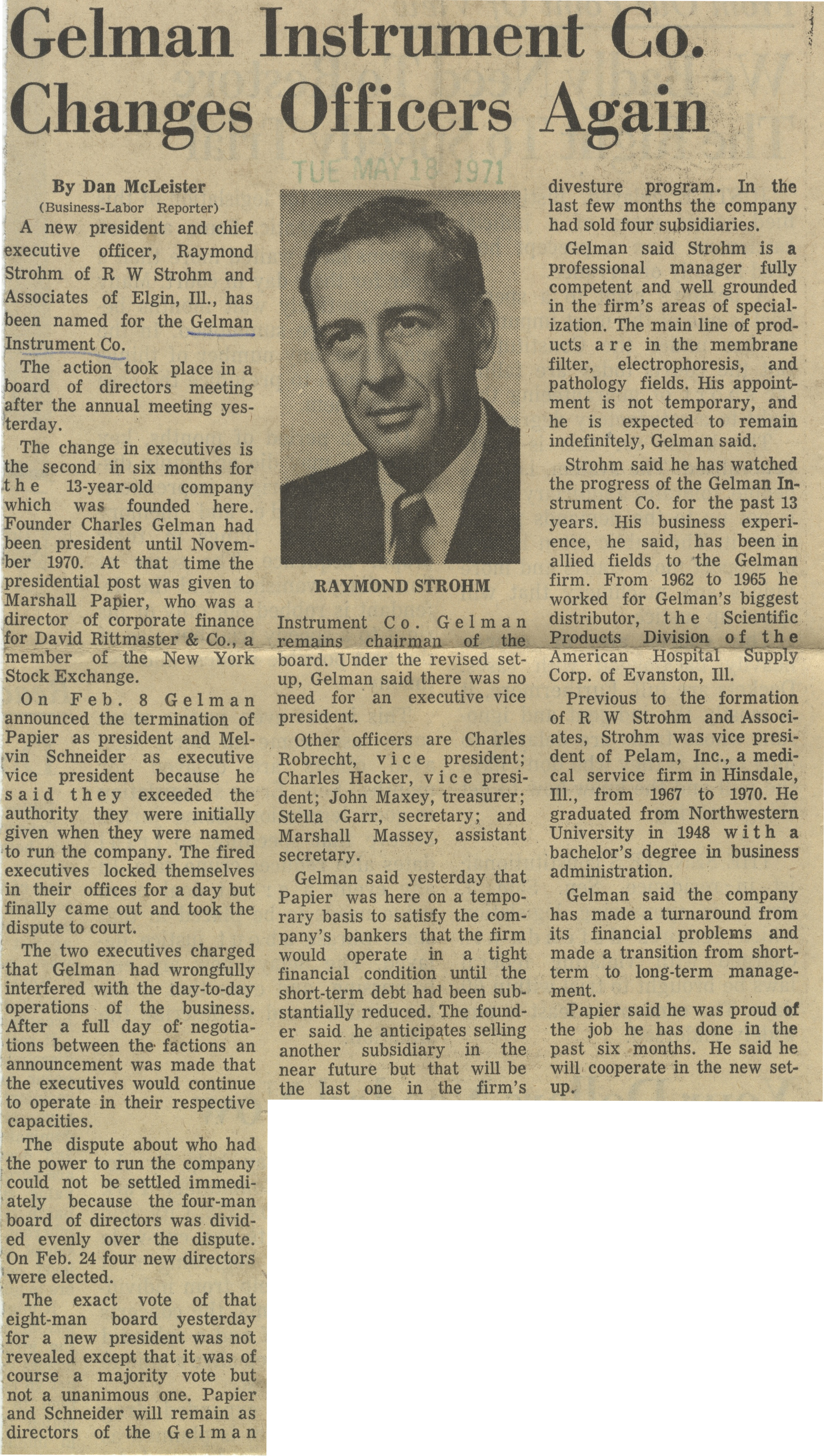 A new president and chief executive officer, Raymond Strohm of R W Strohm and Associates of Elgin, 111., has been named for the Gelman Instrument Co.

The action took place in a board of directors meeting after the annual meeting yesterday.

The change in executives is the second in six months for the 13-year-old company which was founded here. Founder Charles Gelman had been president until November 1970. At that time the presidential post was given to Marshall Papier, who was a director of corporate finance for David Rittmaster & Co., a member of the New York Stock Exchange.

On Feb. 8 Gelman announced the termination of Papier as president and Melvin Schneider as executive vice president because he said they exceeded the authority they were initially given when they were named to run the company. The fired executives locked themselves in their offices for a day but finally came out and took the dispute to court.

The two executives charged that Gelman had wrongfully interfered with the day-to-day operations of the business. After a full day of negotiations between the factions an announcement was made that the executives would continue to operate in their respective capacities.

The dispute about who had the power to run the company could not be settled immediately because the four-man board of directors was divided evenly over the dispute. On Feb. 24 four new directors were elected.

The exact vote of that eight-man board yesterday for a new president was not revealed except that it was of course a majority vote but not a unanimous one. Papier and Schneider will remain as directors of the Gelman Instrument Co. Gelman remains chairman of the board. Under the revised setup, Gelman said there was no need for an executive vice president.

Gelman said yesterday that Papier was here on a temporary basis to satisfy the company’s bankers that the firm would operate in a tight financial condition until the short-term debt had been substantially reduced. The founder said he anticipates selling another subsidiary in the near future but that will be the last one in the firm’s divesture program. In the last few months the company had sold four subsidiaries.

Gelman said Strohm is a professional manager fully competent and well grounded in the firm’s areas of specialization. The main line of products are in the membrane filter, electrophoresis, and pathology fields. His appointment is not temporary, and he is expected to remain indefinitely, Gelman said.

Strohm said he has watched the progress of the Gelman Instrument Co. for the past 13 years. His business experience, he said, has been in allied fields to the Gelman firm. From 1962 to 1965 he worked for Gelman’s biggest distributor, the Scientific Products Division of the American Hospital Supply Corp. of Evanston, 111.

Previous to the formation of R W Strohm and Associates, Strohm was vice president of Pelam, Inc., a medical service firm in Hinsdale, HI., from 1967 to 1970. He graduated from Northwestern University in 1948 with a bachelor’s degree in business administration.

Gelman said the company has made a turnaround from its financial problems and made a transition from short-term to long-term management.

Papier said he was proud of the job he has done in the past six months. He said he will cooperate in the new setup.