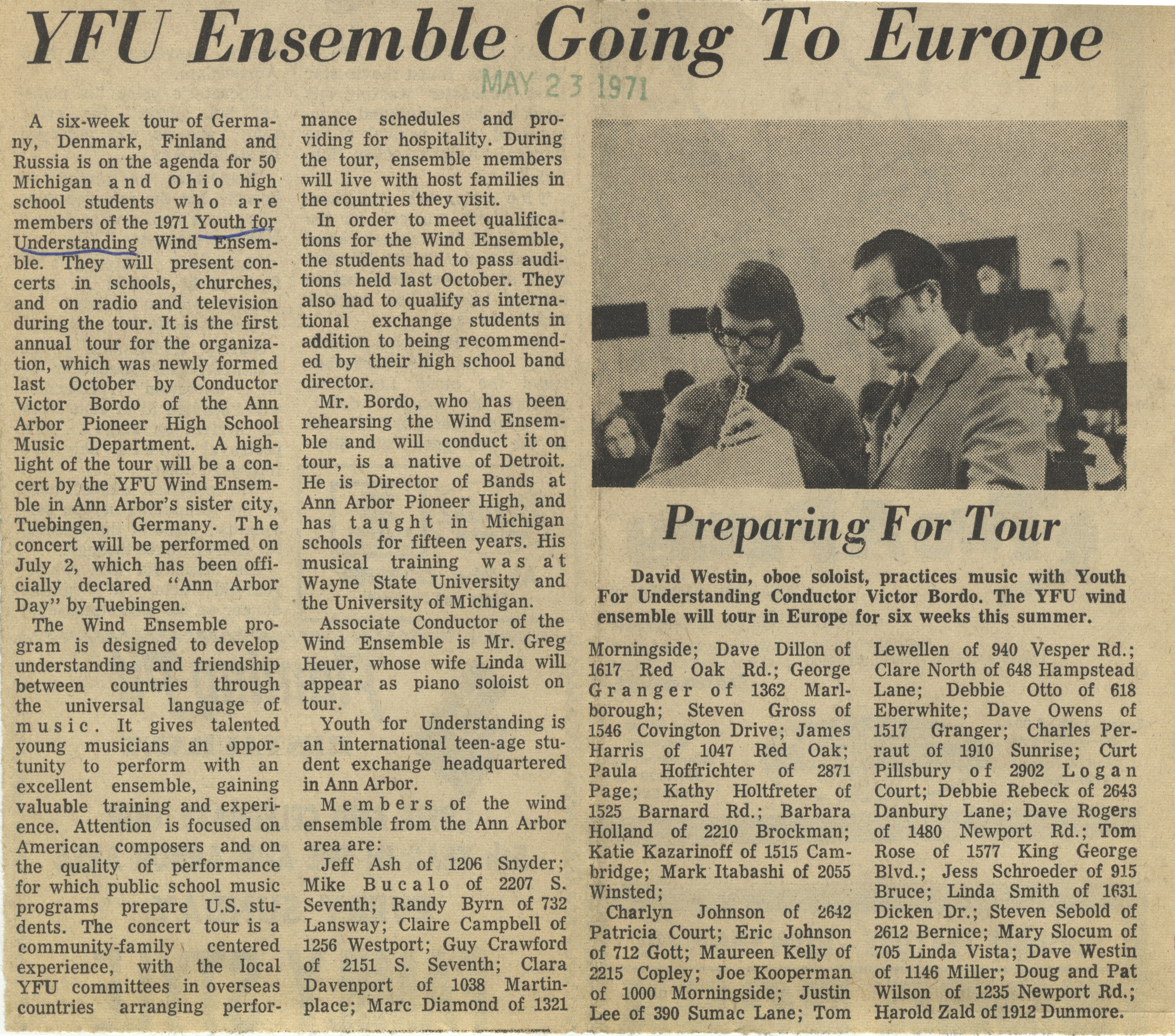 A six-week tour of Germany, Denmark, Finland and Russia is on the agenda for 50 Michigan and Ohio high school students who are members of the 1971 Youth for Understanding Wind Ensemble. They will present concerts in schools, churches, and on radio and television during the tour. It is the first annual tour for the organization, which was newly formed last October by Conductor Victor Bordo of the Ann Arbor Pioneer High School Music Department. A highlight of the tour will be a concert by the YFU Wind Ensemble in Ann Arbor’s sister city, Tuebingen, Germany. The concert will be performed on July 2, which has been officially declared “Ann Arbor Day” by Tuebingen.

The Wind Ensemble program is designed to develop understanding and friendship between countries through the universal language of music. It gives talented young musicians an opportunity to perform with an excellent ensemble, gaining valuable training and experience. Attention is focused on American composers and on the quality of performance for which public school music programs prepare U.S. students. The concert tour is a community-family centered experience, with the local YFU committees in overseas countries arranging performance schedules and providing for hospitality. During the tour, ensemble members will live with host families in the countries they visit.

In order to meet qualifications for the Wind Ensemble, the students had to pass auditions held last October. They also had to qualify as international exchange students in addition to being recommended by their high school band director.

Mr. Bordo, who has been rehearsing the Wind Ensemble and will conduct it on tour, is a native of Detroit. He is Director of Bands at Ann Arbor Pioneer High, and has taught in Michigan schools for fifteen years. His musical training was a t Wayne State University and the University of Michigan.

Associate Conductor of the Wind Ensemble is Mr. Greg Heuer, whose wife Linda will appear as piano soloist on tour.

Youth for Understanding is an international teen-age student exchange headquartered in Ann Arbor.

Members of the wind ensemble from the Ann Arbor area are: