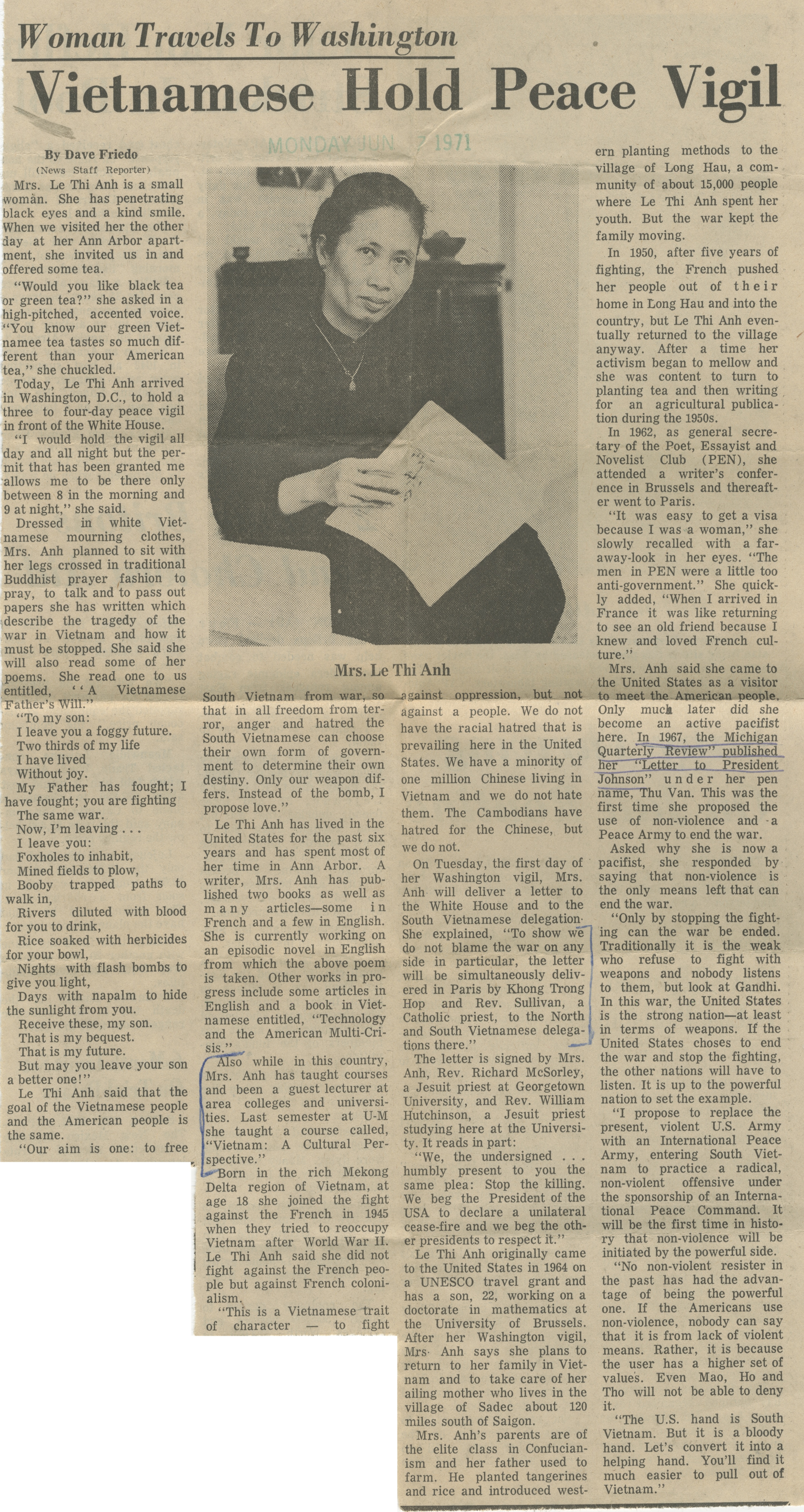 Mrs. Le Thi Anh is a small woman. She has penetrating black eyes and a kind smile. When we visited her the other day at her Ann Arbor apartment, she invited us in and offered some tea.

“Would you like black tea or green tea?” she asked in a high-pitched, accented voice. “You know our green Vietnamee tea tastes so much different than your American tea,” she chuckled.

Today, Le Thi Anh arrived in Washington, D.C., to hold a three to four-day peace vigil in front of the White House.

“I would hold the vigil all day and all night but the permit that has been granted me allows me to be there only between 8 in the morning and 9 at night,” she said.

Dressed in white Vietnamese mourning clothes, Mrs. Anh planned to sit with her legs crossed in traditional Buddhist prayer fashion to pray, to talk and to pass out papers she has written which describe the tragedy of the war in Vietnam and how it must be stopped. She said she will also read some of her poems. She read one to us entitled, ‘ ‘ A Vietnamese 'Father’s' Will"

I leave you a foggy future. Two thirds of my life I have lived Without joy.
My Father has fought; I have fought; you are fighting The same war.
Now, I’m leaving ...
I leave you:
Foxholes to inhabit,
Mined fields to plow,
Booby trapped paths to walk in,
Rivers diluted with blood for you to drink,
Rice soaked with herbicides for your bowl,
Nights with flash bombs to give you light.
Days with napalm to hide the sunlight from you.
Receive these, my son.
That is my bequest.
That is my future.
But may you leave your son a better one!”

Le Thi Anh said that the goal of the Vietnamese people and the American people is the same.

“Our aim is one: to free South Vietnam from war so that in all freedom from terror, anger and hatred the South Vietnamese can choose their own form of government to determine their own destiny. Only our weapon differs. Instead of the bomb, I propose love.”

Le Thi Anh has lived in the United States for the past six years and has spent most of her time in Ann Arbor. A writer, Mrs. Anh has published two books as well as many articles—some in French and a few in English. She is currently working on an episodic novel in English from which the above poem is taken. Other works in progress include some articles in English and a book in Vietnamese entitled, “Technology and the American Multi-Crisis."

While in this country, Mrs. Anh has taught courses and been a guest lecturer at area colleges and universities. Last semester at U-M she taught a course called, ‘Vietnam: A Cultural Perspective.”

"This is a Vietnamese trait of character — to fight against oppression, but not against a people. We do not have the racial hatred that is prevailing here in the United States. We have a minority of one million Chinese living in Vietnam and we do not hate them. The Cambodians have hatred for the Chinese, but we do not."

On Tuesday, the first day of her Washington vigil, Mrs. Anh will deliver a letter to the White House and to the South Vietnamese delegation. She explained, “To show we do not blame the war on any side in particular, the letter will be simultaneously delivered in Paris by Khong Trong Hop and Rev. Sullivan, a Catholic priest, to the North and South Vietnamese delegations there.”

“We, the undersigned . . . humbly present to you the same plea: Stop the killing. We beg the President of the USA to declare a unilateral cease-fire and we beg the other presidents to respect it.”

Le Thi Anh originally came to the United States in 1964 on a UNESCO travel grant and has a son, 22, working on a doctorate in mathematics at the University of Brussels. After her Washington vigil, Mrs- Anh says she plans to return to her family in Vietnam and to take care of her ailing mother who lives in the village of Sadec about 120 miles south of Saigon.

Mrs. Anh’s parents are of the elite class in Confucianism and her father used to farm. He planted tangerines and rice and introduced western planting methods to the village of Long Hau, a community of about 15,000 people where Le Thi Anh spent her youth. But the war kept the family moving.

In 1950, after five years of fighting, the French pushed her people out of their home in Long Hau and into the country, but Le Thi Anh eventually returned to the village anyway. After a time her activism began to mellow and she was content to turn to planting tea and then writing for an agricultural publication during the 1950s.

In 1962, as general secretary of the Poet, Essayist and Novelist Club (PEN), she attended a writer’s conference in Brussels and thereafter went to Paris.

“It was easy to get a visa because I was a woman,” she slowly recalled with a faraway-look in her eyes. “The men in PEN were a little too anti-government.” She quickly added, “When I arrived in France it was like returning to see an old friend because I knew and loved French culture.”

Mrs. Anh said she came to the United States as a visitor to meet the American people. Only much later did she become an active pacifist here. In 1967 the Michigan Quarterly Review published her "Letter to President Johnson'' under her pen name, Thu Van. This was the first time she proposed the use of non-violence and a Peace Army to end the war.

Asked why she is now a pacifist, she responded by saying that non-violence is the only means left that can end the war.

“Only by stopping the fighting can the war be ended. Traditionally it is the weak who refuse to fight with weapons and nobody listens to them, but look at Gandhi. In this war, the United States is the strong nation—at least in terms of weapons. If the United States chooses to end the war and stop the fighting, the other nations will have to listen. It is up to the powerful nation to set the example.

“No non-violent resister in the past has had the advantage of being the powerful one. If the Americans use non-violence, nobody can say that it is from lack of violent means. Rather, it is because the user has a higher set of values. Even Mao, Ho and Tho will not be able to deny it.

“The U.S. hand is South Vietnam. But it is a bloody hand. Let’s convert it into a helping hand. You’ll find it much easier to pull out of Vietnam.”