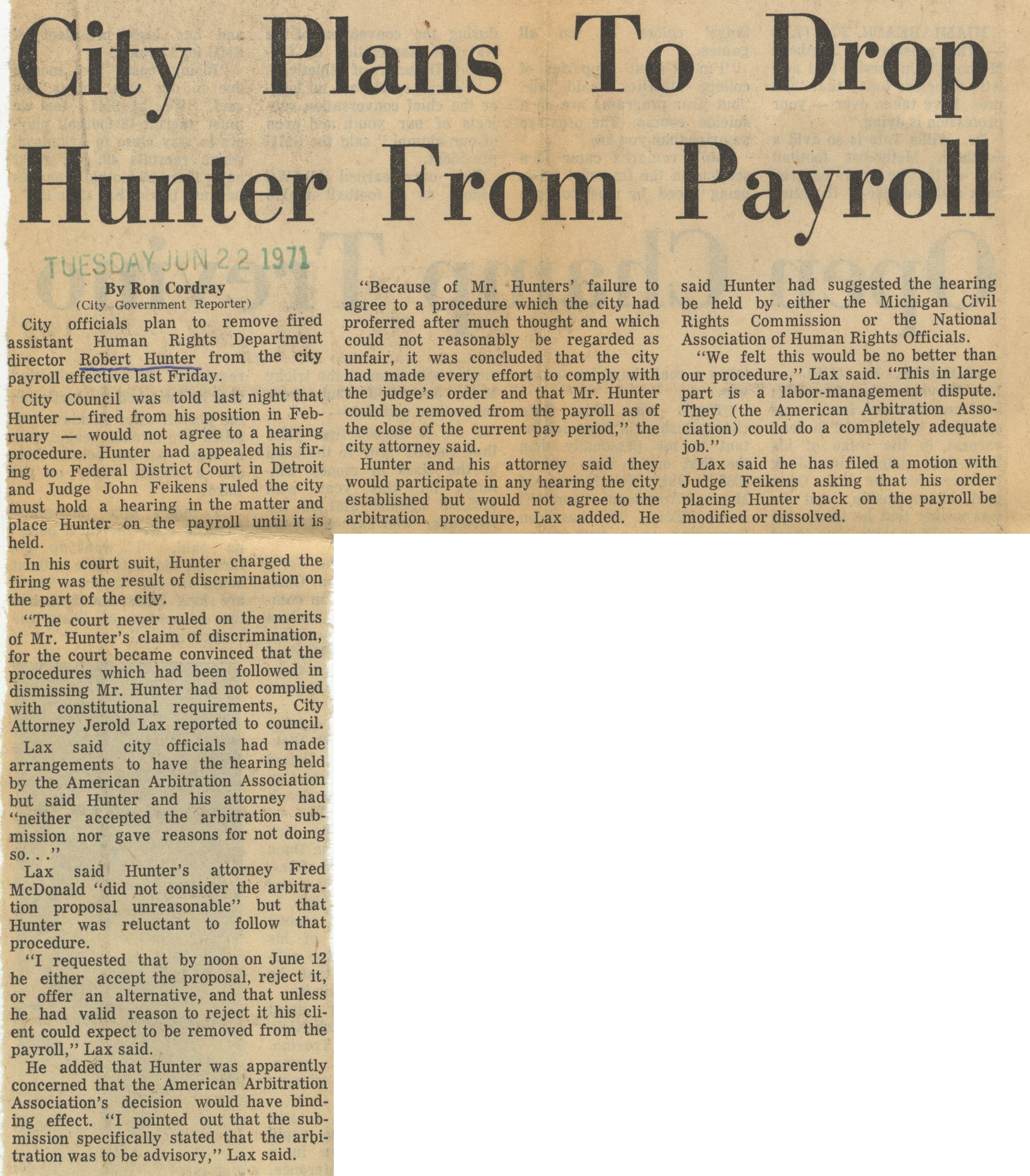 City Council was told last night that Hunter — fired from his position in February — would not agree to a hearing procedure. Hunter had appealed his firing to Federal District Court in Detroit and Judge John Feikens ruled the city must hold a hearing in the matter and place Hunter on the payroll until it is held.

In his court suit, Hunter charged the firing was the result of discrimination on the part of the city.

“The court never ruled on the merits of Mr. Hunter’s claim of discrimination, for the court became convinced that the procedures which had been followed in dismissing Mr. Hunter had not complied with constitutional requirements, City Attorney Jerold Lax reported to council.

Lax said city officials had made arrangements to have the hearing held by the American Arbitration Association but said Hunter and his attorney had “neither accepted the arbitration submission nor gave reasons for not doing so..."

Lax said Hunter’s attorney Fred McDonald “did not consider the arbitration proposal unreasonable” but that Hunter was reluctant to follow that procedure.

“I requested that by noon on June 12 he either accept the proposal, reject it, or offer an alternative, and that unless he had valid reason to reject it his client could expect to be removed from the payroll,” Lax said.

He added that Hunter was apparently concerned that the American Arbitration Association’s decision would have binding effect. “I pointed out that the submission specifically stated that the arbitration was to be advisory,” Lax said.

“Because of Mr. Hunter's failure to agree to a procedure which the city had proferred after much thought and which could not reasonably be regarded as unfair, it was concluded that the city had made every effort to comply with the judge’s order and that Mr. Hunter could be removed from the payroll as of the close of the current pay period,” the city attorney said.

Hunter and his attorney said they would participate in any hearing the city established but would not agree to the arbitration procedure, Lax added. He said Hunter had suggested the hearing be held by either the Michigan Civil Rights Commission or the National Association of Human Rights Officials.

“We felt this would be no better than our procedure,” Lax said. “This in large part is a labor-management dispute. They (the American Arbitration Association) could do a completely adequate job.”

Lax said he has filed a motion with Judge Feikens asking that his order placing Hunter back on the payroll be modified or dissolved.