Papers Give Look At Pioneer 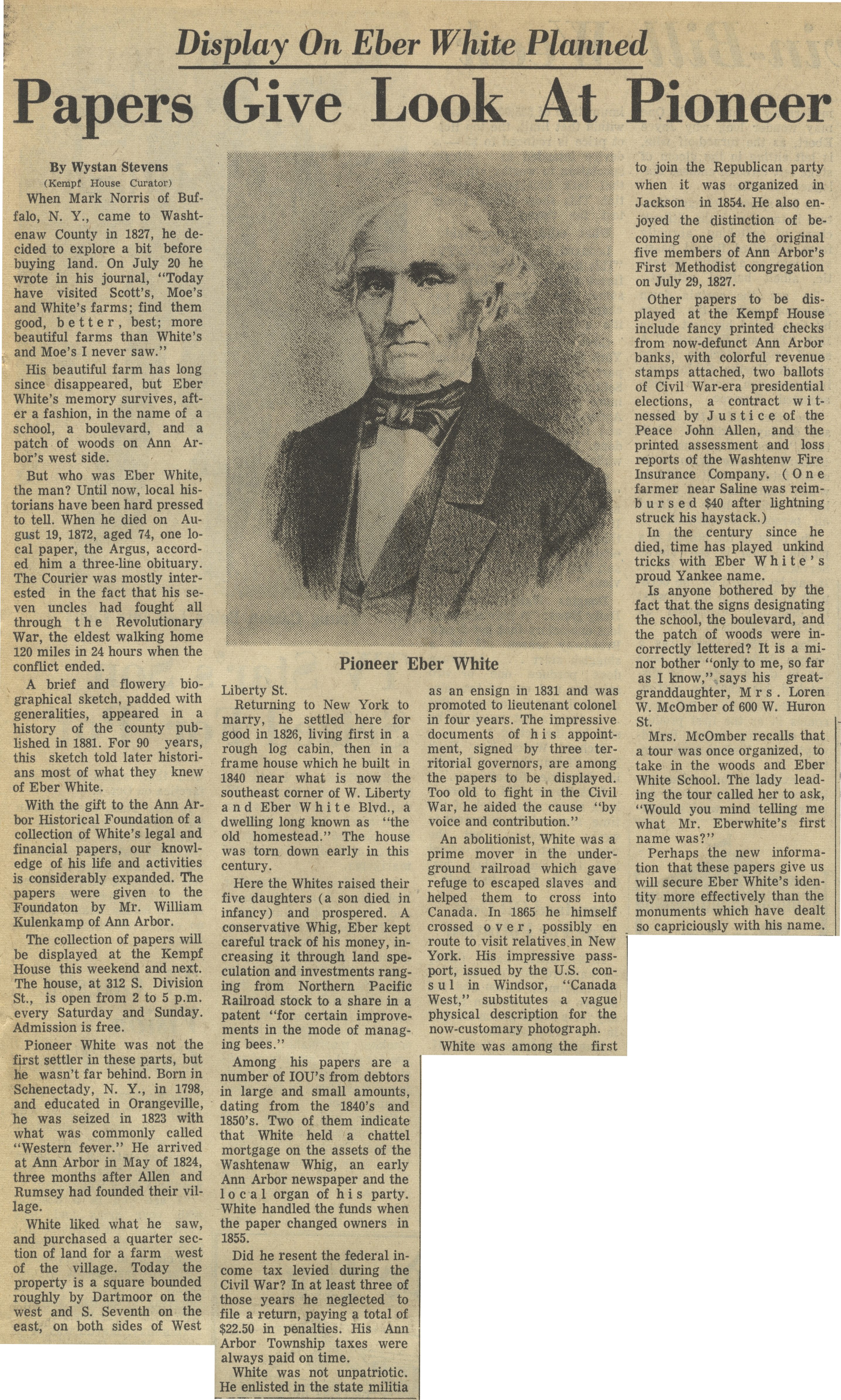 Papers Give Look At Pioneer

When Mark Norris of Buffalo, N. Y., came to Washtenaw County in 1827, he decided to explore a bit before buying land. On July 20 he wrote in his journal, “Today have visited Scott’s, Moe’s and White’s farms; find them good, better, best; more beautiful farms than White’s and Moe’s I never saw.”

His beautiful farm has long since disappeared, but Eber White’s memory survives, after a fashion, in the name of a school, a boulevard, and a patch of woods on Ann Arbor’s west side.

But who was Eber White, the man? Until now, local historians have been hard pressed to tell. When he died on August 19, 1872, aged 74, one local paper, the Argus, accorded him a three-line obituary. The Courier was mostly interested in the fact that his seven uncles had fought all through the Revolutionary War, the eldest walking home 120 miles in 24 hours when the conflict ended.

A brief and flowery biographical sketch, padded with generalities, appeared in a history of the county published in 1881. For 90 years, this sketch told later historians most of what they knew of Eber White.

With the gift to the Ann Arbor Historical Foundation of a collection of White’s legal and financial papers, our knowledge of his life and activities is considerably expanded. The papers were given to the Foundaton by Mr. William Kulenkamp of Ann Arbor.

The collection of papers will be displayed at the Kempf House this weekend and next. The house, at 312 S. Division St., is open from 2 to 5 p.m. every Saturday and Sunday. Admission is free.

Pioneer White was not the first settler in these parts, but he wasn’t far behind. Born in Schenectady, N. Y., in 1798, and educated in Orangeville, he was seized in 1823 with what was commonly called “Western fever.” He arrived at Ann Arbor in May of 1824, three months after Allen and Rumsey had founded their village.

White liked what he saw, and purchased a quarter section of land for a farm west of the village. Today the property is a square bounded roughly by Dartmoor on the west and S. Seventh on the east, on both sides of West Liberty St.

Returning to New York to marry, he settled here for good in 1826, living first in a rough log cabin, then in a frame house which he built in 1840 near what is now the southeast corner of W. Liberty and Eber White Blvd., a dwelling long known as “the old homestead.” The house was torn down early in this century.

Here the Whites raised their five daughters (a son died in infancy) and prospered. A conservative Whig, Eber kept careful track of his money, increasing it through land speculation and investments ranging from Northern Pacific Railroad stock to a share in a patent “for certain improvements in the mode of managing bees.”

Among his papers are a number of IOU’s from debtors in large and small amounts, dating from the 1840’s and 1850’s. Two of them indicate that White held a chattel mortgage on the assets of the Washtenaw Whig, an early Ann Arbor newspaper and the local organ of h i s party. White handled the funds when the paper changed owners in 1855.

Did he resent the federal income tax levied during the Civil War? In at least three of those years he neglected to file a return, paying a total of $22.50 in penalties. His Ann Arbor Township taxes were always paid on time.

White was not unpatriotic. He enlisted in the state militia as an ensign in 1831 and was promoted to lieutenant colonel in four years. The impressive documents of his appointment, signed by three territorial governors, are among the papers to be displayed. Too old to fight in the Civil War, he aided the cause “by voice and contribution.”

An abolitionist, White was a prime mover in the underground railroad which gave refuge to escaped slaves and helped them to cross into Canada. In 1865 he himself crossed over, possibly en route to visit relatives.in New York. His impressive passport, issued by the U.S. consulate in Windsor, “Canada West,” substitutes a vague physical description for the now-customary photograph.

White was among the first to join the Republican party when it was organized in Jackson in 1854. He also enjoyed the distinction of becoming one of the original five members of Ann Arbor’s First Methodist congregation on July 29, 1827.

Other papers to be displayed at the Kempf House include fancy printed checks from now-defunct Ann Arbor banks, with colorful revenue stamps attached, two ballots of Civil War-era presidential elections, a contract witnessed by Justice of the Peace John Allen, and the printed assessment and loss reports of the Washtenaw Fire Insurance Company. (One farmer near Saline was reimbursed $40 after lightning struck his haystack.)

In the century since he died, time has played unkind tricks with Eber White’s proud Yankee name.

Is anyone bothered by the fact that the signs designating the school, the boulevard, and the patch of woods were incorrectly lettered? It is a minor bother “only to me, so far as I know,”, says his great-granddaughter, Mrs. Loren W. McOmber of 600 W. Huron St.

Mrs. McOmber recalls that a tour was once organized, to take in the woods and Eber White School. The lady leading the tour called her to ask, “Would you mind telling me what Mr. Eberwhite’s first name was?”

Perhaps the new information that these papers give us will secure Eber White’s identity more effectively than the monuments which have dealt so capriciously with his name.