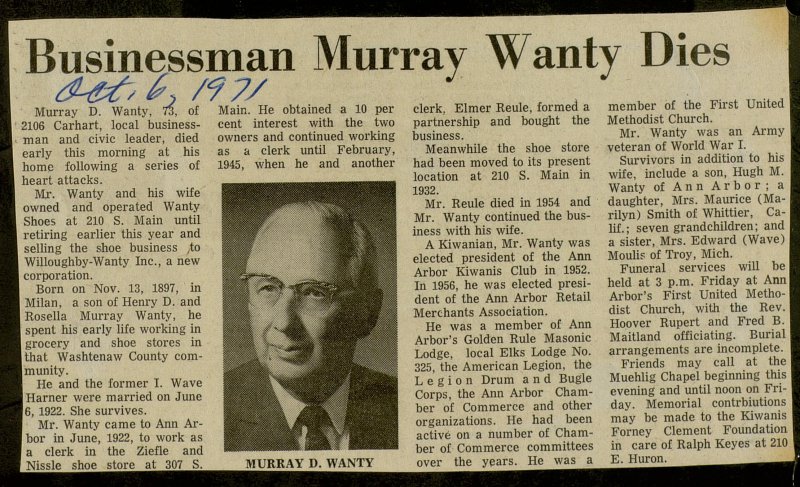 Murray D. Wanty, 73, of 2106 Carhart, local business man and civic leader, died early this morning at his home following a series of heart attacks. Mr. Wanty and his wife owned and operated Wanty Shoes at 210 S. Main until retiring earlier this year and selling the shoe business ,to Willoughby-Wanty Inc., a new Corporation. Born on Nov. 13, 1897, in Milán, a son of Henry D. and Rosella Murray Wanty, he spent his early life working in grocery and shoe stores in that Washtenaw County community. He and the former I. Wave I Harner were married on June '■6, 1922. She survives. Mr. Wanty carne to Ann Arbor in June, 1922, to work as a clerk in the Ziefle and 5 Nissle shoe store at 307 S. rs Main. He obtained a 10 per cent interest with the two owners and continued working as a clerk until February, 1945, when he and another clerk. Elmer Reule, formed a partnership and bought the business. Meanwhile the shoe store had been moved to its present location at 210 S. Main in 1932. Mr. Reule died in 1954 and Mr. Wanty continued the business with his wife. A Kiwanian, Mr. Wanty was elected president of the Ann Arbor Kiwanis Club in 1952. In 1956, he was elected president of the Ann Arbor Retail Merchants Association. He was a member of Ann Arbor's Golden Rule Masonic Lodge, local Elks Lodge No. 325, the American Legion, the Legion Drum and Bugle Corps, the Ann Arbor Chamber of Commerce and other organizations. He had been active on a number of Chamber of Commerce committees over the years. He was a - - - - member of the First United Methodist Church. Mr. Wanty was an Army veteran of World War I. Survivors in addition to his wife, include a son, Hugh M. Wanty of Ann Arbor; a daughter, Mrs. Maurice (Marilyn) Smith of Whittier, Calif. ; seven grandchildren; and a sister, Mrs. Edward (Wave) Moulis of Troy, Mich. Funeral services will bel held at 3 p.m. Friday at Ann Arbor's First United Methodist Church, with the Rev. Hoover Rupert and Fred B. Maitland officiating. Burial arrangements are incomplete. Friends may cali at the Muehlig Chapel beginning this evening and until noon on Friday. Memorial contributions may be made to the Kiwanis Forney Clement Foundation in care of Ralph Keyes at 210 E. Huron.