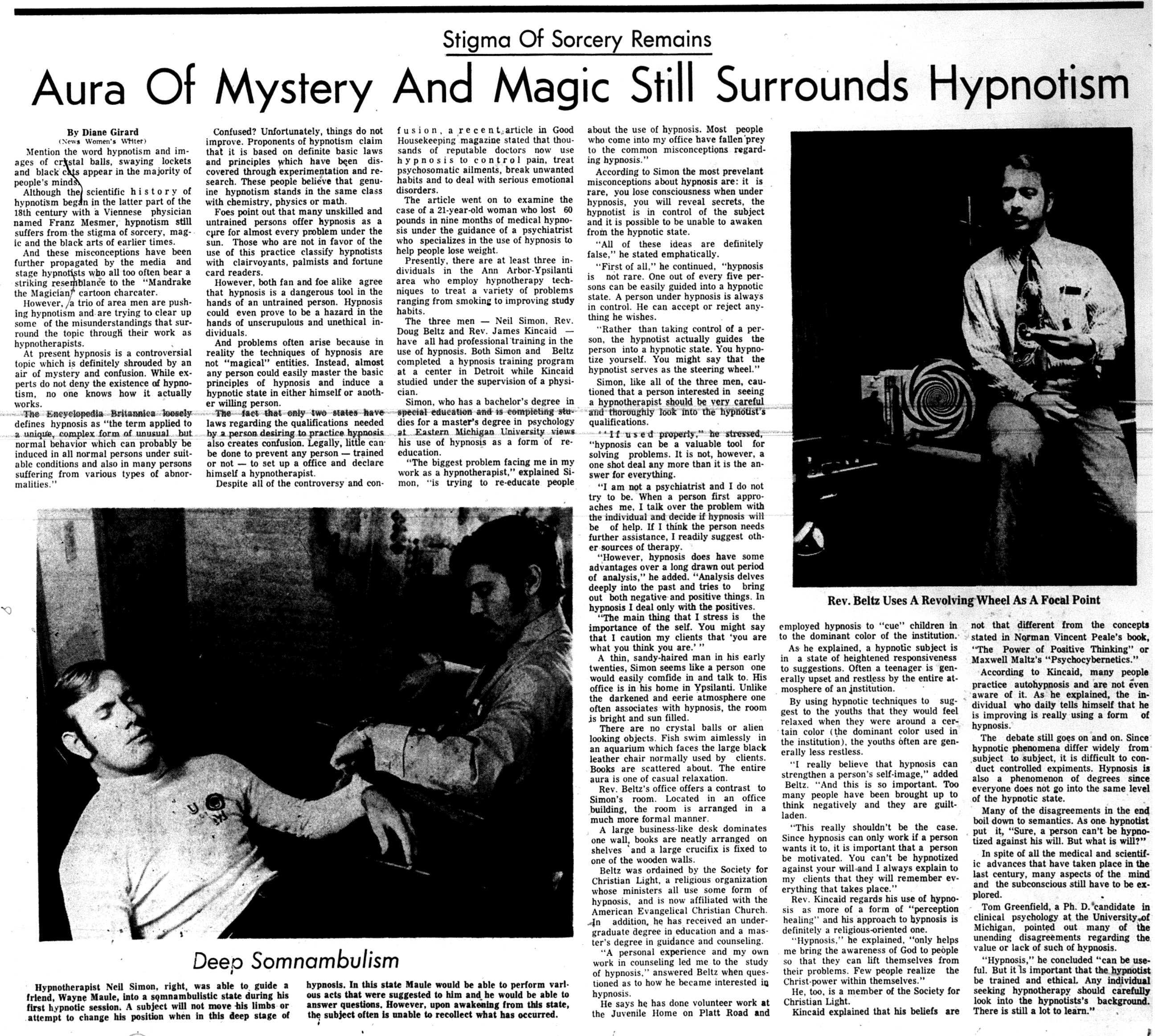 Hypnotherapist Neil Simon, right, was able to guide a friend, Wayne Maule, into a somnambulistic state during his first hypnotic session. A subject will not move his limbs or attempt to change his position when in this deep stage of hypnosis. In this state Maule would be able to perform various acts that were suggested to him and he would be able to answer questions. However, upon awakening from this state, the subject often is tumble to recollect what has occurred.

Mention the word hypnotism and images of crystal balls, swaying lockets and black cats appear in the majority of people's minds.

Although the scientific history of hypnotism began in the latter part of the 18th century with a Viennese physician named Franz Mesmer, hypnotism still suffers from the stigma of sorcery, magic and the black arts of earlier times.

And these misconceptions have been further propagated by the media and stage hypnotists who all too often bear a striking resemblance to the “Mandrake the Magician" cartoon charcater.

However, a trio of area men are pushing hypnotism and are trying to clear up some of the misunderstandings that surround the topic through their work as hypnotherapists.

At present hypnosis is a controversial topic which is definitely shrouded by an air of mystery and confusion. While experts do not deny the existence of hypnotism, no one knows how it actually works.

The Encyclopedia Britanniea  loosely defines hypnosis as "the term applied to a unique, complex form of unusual but normal behavior which can probably be induced in all normal persons under suitable conditions and also in many persons suffering from various types of abnormalities.”

Confused? Unfortunately, things do not improve. Proponents of hypnotism claim that it is based on definite basic laws and principles which have been discovered through experimentation and research. These people believe that genuine hypnotism stands in the same class with chemistry, physics or math.

Foes point out that many unskilled and untrained persons offer hypnosis as a cure for almost every problem under the sun. Those who are not in favor of the use of this practice classify hypnotists with clairvoyants, palmists and fortune card readers.

However, both fan and foe alike agree that hypnosis is a dangerous tool in the hands of an untrained person. Hypnosis could even prove to be a hazard in the hands of unscrupulous and unethical individuals.

And problems often arise because in reality the techniques of hypnosis are not "magical” entities. Instead, almost any person could easily master the basic principles of hypnosis and induce a hypnotic state in either himself or another willing person.

The fact that only two states have laws regarding the qualifications needed by a person desiring to practice hypnosis also creates confusion. Legally, little can-be done to prevent any person — trained or not — to set up a office and declare himself a hypnotherapist.

Despite all of the controversy and confusion, a recent, article in Good Housekeeping magazine stated that thousands of reputable doctors now use hypnosis to control pain, treat psychosomatic ailments, break unwanted habits and to deal with serious emotional disorders.

The article went on to examine the case of a 21-year-old woman who lost 60 pounds in nine months of medical hypnosis under the guidance of a psychiatrist who specializes in the use of hypnosis to help people lose weight.

Presently, there are at least three individuals in the Ann Arbor-Ypsilanti area who employ hypnotherapy techniques to treat a variety of problems ranging from smoking to improving study habits.

The three men — Neil Simon. Rev. Doug Beltz and Rev. James Kincaid — have all had professional training in the use of hypnosis. Both Simon and Beltz completed a hypnosis training program at a center in Detroit while Kincaid studied under the supervision of a physician.

Simon, who has a bachelor’s degree in special education and is completing studies for a master’s degree in psychology al Eastern Michigan University views his use of hypnosis as a form of reeducation.

“The biggest problem facing me in my work as a hypnotherapist,” explained Simon, "is trying to re-educate people about the use of hypnosis. Most people who come into my office have fallen prey to the common misconceptions regarding hypnosis.”

According to Simon the most prevelant misconceptions about hypnosis are: it is rare, you lose consciousness when under hypnosis, you will reveal secrets, the hypnotist is in control of the subject and it is possible to be unable to awaken from the hypnotic state.

"All of these ideas are definitely false,” he stated emphatically.
"First of all," he continued, “hypnosis is not rare. One out of every five persons can be easily guided into a hypnotic state. A person under hypnosis is always in control. He can accept or reject anything he wishes.

"Rather than taking control of a person, the hypnotist actually guides the person into a hypnotic state. You hypnotize yourself. You might say that the hypnotist serves as the steering wheel.”

Simon, like all of the three men, cautioned that a person interested in seeing a hypnotherapist should be very careful and thoroughly look Into the hypnotist's qualifications.

"If used properly,” he stressed, “hypnosis can be a valuable tool for solving problems. It is not, however, a one shot deal any more than it is the answer for everything.

“I am not a psychiatrist and I do not try to be. When a person first approaches me. I talk over the problem with the individual and decide if hypnosis will be of help. If I think the person needs further assistance, I readily suggest other sources of therapy.

“However, hypnosis does have some advantages over a long drawn out period of analysis," he added. "Analysis delves deeply into the past and tries to bring out both negative and positive things. In hypnosis I deal only with the positives.

“The main thing that I stress is the importance of the self. You might say that I caution my clients that ‘you are what you think you are.' ”

A thin, sandy-haired man in his early twenties, Simon seems like a person one would easily comfide in and talk to. His office is in his home in Ypsilanti. Unlike the darkened and eerie atmosphere one often associates with hypnosis, the room is bright and sun filled.

There are no crystal balls or alien looking objects. Fish swim aimlessly in an aquarium which faces the large black leather chair normally used by clients. Books are scattered about. The entire aura is one of casual relaxation.

Rev. Beltz’s office offers a contrast to Simon’s room. Located in an office building, the room is arranged in a much more formal manner.

A large business-like desk dominates one wall, books are neatly arranged on shelves "and a large crucifix is fixed to one of the wooden walls.

Beltz was ordained by the Society for Christian Light, a religious organization whose ministers all use some form of hypnosis, and is now affiliated with the American Evangelical Christian Church. In addition, he has received an undergraduate degree in education and a master’s degree in guidance and counseling.

“A personal experience and my own work in counseling led me to the study of hypnosis." answered Beltz when questioned as to how he became interested in hypnosis.

Rev. Beltz Uses A Revolving Wheel As A Focal Point employed hypnosis to “cue" children in to the dominant color of the institution.

As he explained, a hypnotic subject is in a state of heightened responsiveness to suggestions. Often a teenager is generally upset and restless by the entire atmosphere of an institution.

By using hypnotic techniques to suggest to the youths that they would feel relaxed when they were around a certain color (the dominant color used in the institution), the youths often are generally less restless.

"I really believe that hypnosis can strengthen a person’s self-image," added Beltz. "And this is so important. Too many people have been brought up to think negatively and they are guilt laden.

"This really shouldn’t be the case. Since hypnosis can only work if a person wants it to, it is important that a person be motivated. You can’t be hypnotized against your will and I always explain to my clients that they will remember everything that takes place."

Rev. Kincaid regards his use of hypnosis as more of a form of “perception healing" and his approach to hypnosis is definitely a religious-oriented one.

"Hypnosis,” he explained, “only helps me bring the awareness of God to people so that they can lift themselves from their problems. Few people realize the Christ-power within themselves.”
He, too, is a member of the Society for Christian Light.
Kincaid explained that his beliefs are not that different from the concepts stated in Norman Vincent Peale’s book, "The Power of Positive Thinking” or Maxwell Maltz’s “Psychocybernetics.”

According to Kincaid, many people practice autohypnosis and are not even aware of it. As he explained, the individual who daily tells himself that he is improving is really using a form of hypnosis.

The debate still goes on and on. Since hypnotic phenomena differ widely from subject to subject, it is difficult to conduct controlled experiments. Hypnosis is also a phenomenon of degrees since everyone does not go into the same level of the hypnotic state.

Many of the disagreements in the end boil down to semantics. As one hypnotist put it, “Sure, a person can’t be hypnotized against his will. But what is will?”

In spite of all the medical and scientific advances that have taken place in the last century, many aspects of the mind and the subconscious still have to be explored.

Tom Greenfield, a Ph. D. candidate in clinical psychology at the University of Michigan, pointed out many of the unending disagreements regarding the value or lack of such of hypnosis.

“Hypnosis,” he concluded "can be useful. But it Is important that the hypnotist be trained and ethical. Any individual seeking hypnotherapy should carefully look into the hypnotist’s background. There is still a lot to learn.”