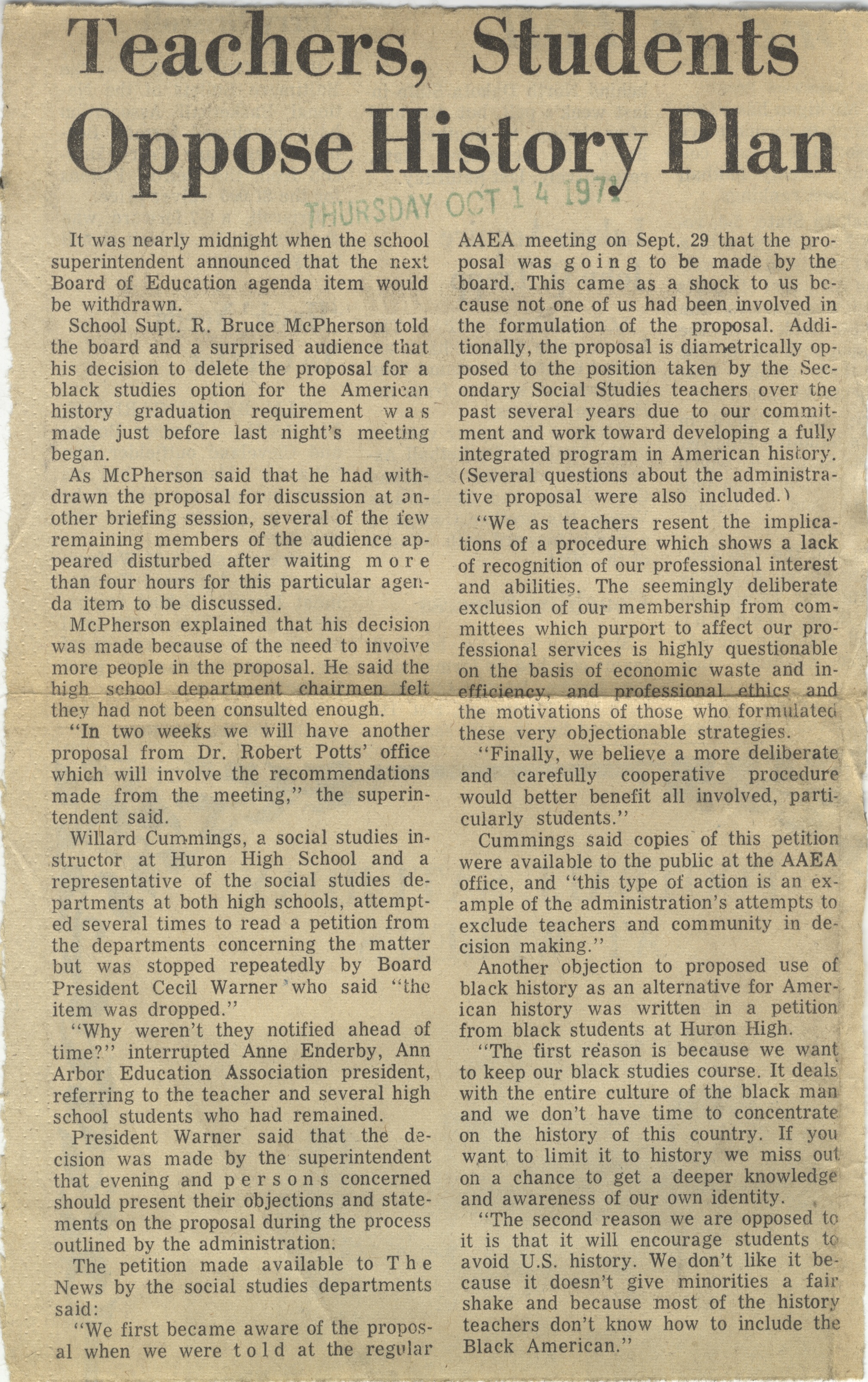 ﻿Teachers, Students Oppose History Plan<br><br>It was nearly midnight when the school superintendent announced that the next Board of Education agenda item would be withdrawn.<br><br>School Supt. R. Bruce McPherson told the board and a surprised audience that his decision to delete the proposal for a black studies option for the American history graduation requirement was made just before last night’s meeting began.<br><br>As McPherson said that he had withdrawn the proposal for discussion at another briefing session, several of the lew remaining members of the audience appeared disturbed after waiting more than four hours for this particular agenda item to be discussed.<br><br>McPherson explained that his decision was made because of the need to involve more people in the proposal. He said the high school department chairmen felt they had not been consulted enough.<br><br>“In two weeks we will have another proposal from Dr. Robert Potts’ office which will involve the recommendations made from the meeting,” the superintendent said.<br><br>Willard Cummings, a social studies instructor at Huron High School and a representative of the social studies departments at both high schools, attempted several times to read a petition from the departments concerning the matter but was stopped repeatedly by Board President Cecil Warner'who said “the item was dropped.”<br><br>“Why weren’t they notified ahead of time?” interrupted Anne Enderby, Ann Arbor Education Association president, referring to the teacher and several high school students who had remained.<br><br>President Warner said that the decision was made by the superintendent that evening and persons concerned should present their objections and statements on the proposal during the process outlined by the administration.<br><br>The petition made available to T h e News by the social studies departments said:<br><br>“We first became aware of the proposal when we were told at the regular<br><br>AAEA meeting on Sept. 29 that the proposal was going to be made by the board. This came as a shock to us because not one of us had been involved in the formulation of the proposal. Additionally, the proposal is diametrically opposed to the position taken by the Secondary Social Studies teachers over the past several years due to our commitment and work toward developing a fully integrated program in American history. (Several questions about the administrative proposal were also included.'<br><br>“We as teachers resent the implications of a procedure which shows a lack of recognition of our professional interest and abilities. The seemingly deliberate exclusion of our membership from committees which purport to affect our professional services is highly questionable on the basis of economic waste and^in-<br><br>the motivations of those who formulated these very objectionable strategies.<br><br>“Finally, we believe a more deliberate and carefully cooperative procedure would better benefit all involved, particularly students.”<br><br>Cummings said copies of this petition were available to the public at the AAEA office, and “this type of action is an example of the administration’s attempts to exclude teachers and community in decision making.”<br><br>Another objection to proposed use of black history as an alternative for American history was written in a petition from black students at Huron High.<br><br>“The first reason is because we want to keep our black studies course. It deals with the entire culture of the black man and we don’t have time to concentrate on the history of this country. If you want to limit it to history we miss out on a chance to get a deeper knowledge and awareness of our own identity.<br><br>"The second reason we are opposed to it is that it will encourage students to avoid U.S. history. We don't like it because it doesn’t give minorities a fair shake and because most of the history teachers don't know how to include the Black American.”