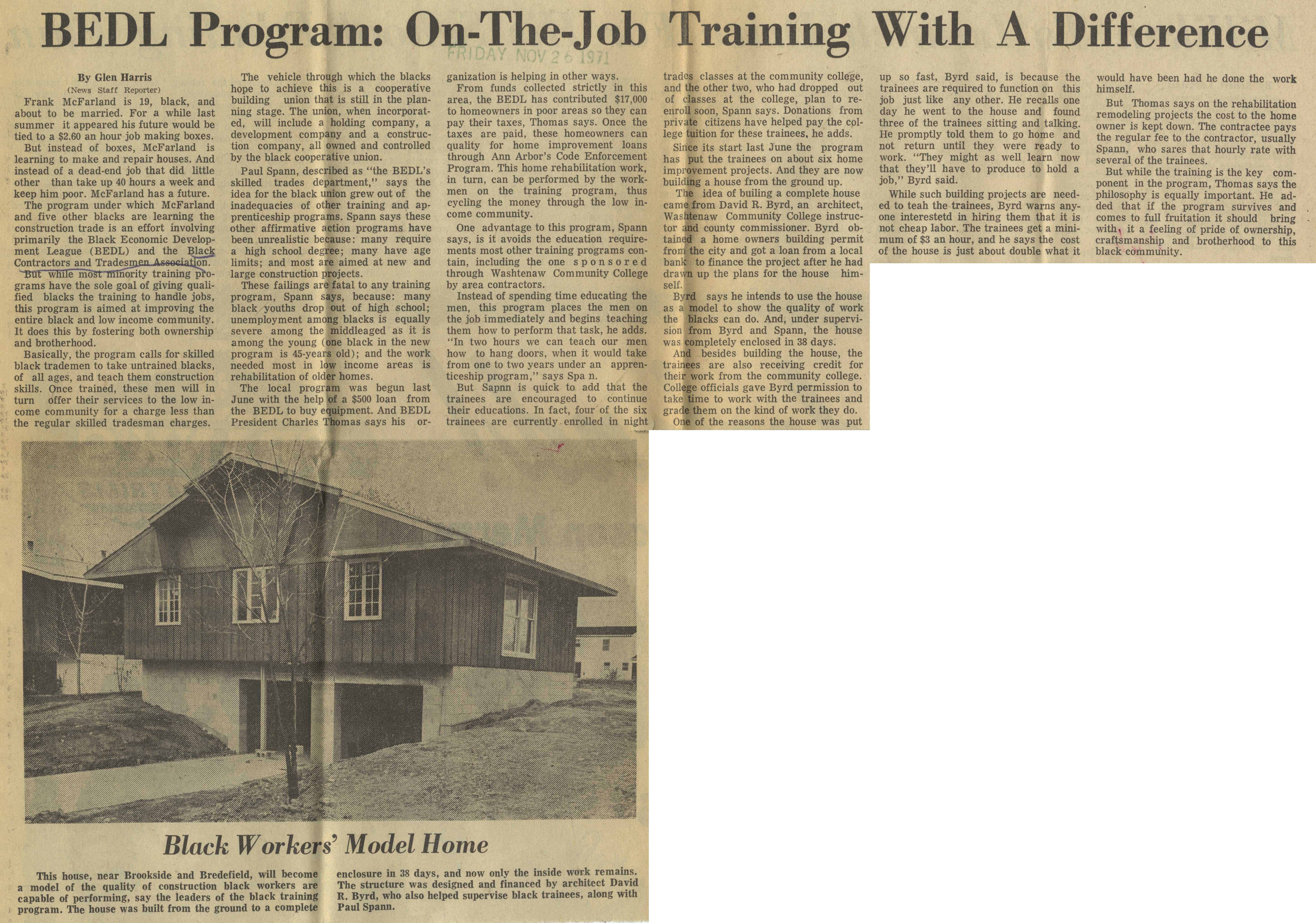 Frank McFarland is 19, black, and about to be married. For a while last summer it appeared his future would be tied to a $2.60 an hour job making boxes.

But instead of boxes, McFarland is learning to make and repair houses. And instead of a dead-end job that did little other than take up 40 hours a week and keep him poor. McFarland has a future.

The program under which McFarland and five other blacks are learning the construction trade is an effort involving primarily the Black Economic Development League (BEDL) and the Black Contractors and Tradesmen Association.

But while most minority training programs have the sole goal of giving qualified blacks the training to handle jobs, this program is aimed at improving the entire black and low income community. It does this by fostering both ownership and brotherhood.

Basically, the program calls for skilled black trademen to take untrained blacks, of all ages, and teach them construction skills. Once trained, these men will in turn offer their services to the low income community for a charge less than the regular skilled tradesman charges.

The vehicle through which the blacks hope to achieve this is a cooperative building union that is still in the planning stage. The union, when incorporated, will include a holding company, a development company and a construction company, all owned and controlled by the black cooperative union.

Paul Spann, described as “the BEDL’s skilled trades department,” says the idea for the black union grew out of the inadequacies of other training and apprenticeship programs. Spann says these other affirmative action programs have been unrealistic because: many require a high school degree; many have age limits; and most are aimed at new and large construction projects.

These failings aid fatal to any training program, Spann says, because: many black youths drop out of high school; unemployment among blacks is equally severe among the middleged as it is among the young (one black in the new program is 45-years old); and the work needed most in low income areas is rehabilitation of older homes.

The local program was begun last $500 loan from the BEDL to buy equipment.  And BEDL President Charles Thomas organization is helping in other ways.

From funds collected strictly in this area, the BEDL has contributed $17,000 to homeowners in poor areas so they can pay their taxes, Thomas says. Once the taxes are paid, these homeowners can quality for home improvement loans through Ann Arbor’s Code Enforcement Program. This home rehabilitation work, in turn, can be performed by the workmen on the training program, thus cycling the money through the low income community.

One advantage to this program, Spann says, is it avoids the education requirements most other training programs contain, including the one sponsored through Washtenaw Community College by area contractors.

Instead of spending time educating the men, this program places the men on the job immediately and begins teaching them how to perform that task, he adds. “In two hours we can teach our men how to hang doors, when it would take from one to two years under an apprenticeship program,” says Spa n.

But Spann is quick to add that the trainees are encouraged to continue their educations. In fact, four of the six trainees are currently enrolled in night trades classes at the community college, and the other two, who had dropped out of classes at the college, plan to reenroll soon, Spann says. Donations from private citizens have helped pay the college tuition for these trainees, he adds.

Since its start last June the program has put the trainees on about six home improvement projects. And they are now building a house from the ground up.

The idea of building a complete house came from David R. Byrd, an architect, Washtenaw Community College instructor and county commissioner. Byrd obtained a home owners building permit from the city and got a loan from a local bank to finance the project after he had drawn up the plans for the house himself.

Byrd says he intends to use the house as a model to show the quality of work the blacks can do. And, under supervision from Byrd and Spann, the house was completely enclosed in 38 days. And besides building the house, the trainees are also receiving credit for their work from the community college. College officials gave Byrd permission to take time to work with the trainees and grade them on the kind of work they do.

One of the reasons the house was put up so fast, Byrd said, is because the trainees are required to function on this job just like any other. He recalls one day he went to the house and found three of the trainees sitting and talking. He promptly told them to go home and not return until they were ready to work. “They might as well learn now that they’ll have to produce to hold a job,” Byrd said.

While such building projects are needed to teach the trainees, Byrd warns anyone interested in hiring them that it is not cheap labor. The trainees get a minimum of $3 an hour, and he says the cost of the house is just about double what it would have been had he done the work himself.

But Thomas says on the rehabilitation remodeling projects the cost to the home owner is kept down. The contractee pays the regular fee to the contractor, usually Spann, who shares that hourly rate with several of the trainees.

But while the training is the key component in the program, Thomas says the philosophy is equally important. He added that if the program survives and comes to full fruitation it should bring with it a feeling of pride of ownership, craftsmanship and brotherhood to this black community.

This house, near Brookside and Bredefield, will become a model of the quality of construction black workers are capable of performing, say the leaders of the black training program. The house was built from the ground to a complete enclosure in 38 days, and now only the inside work remains. The structure was designed and financed by architect David R. Byrd, who also helped supervise black trainees, along with Paul Spann.