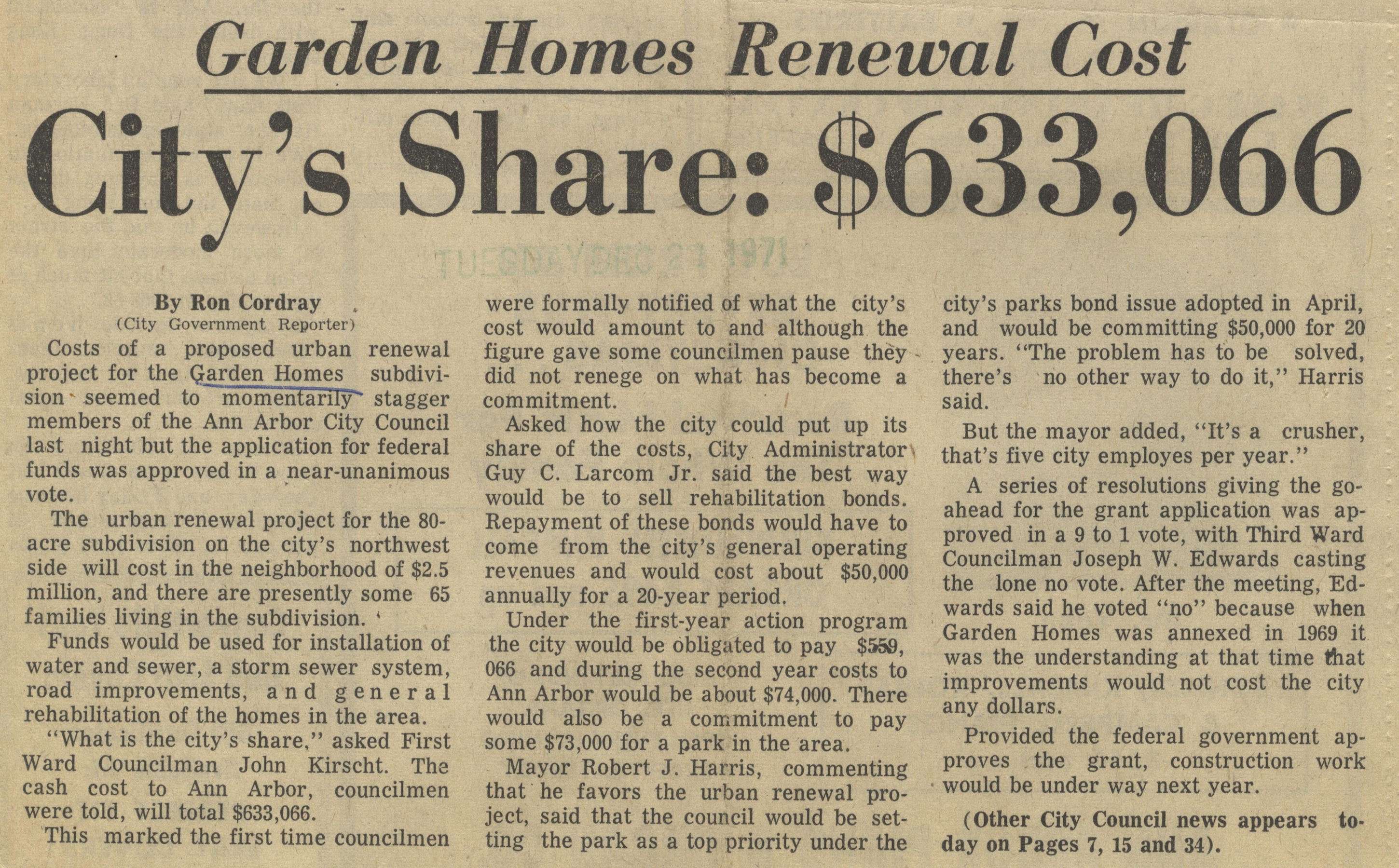 Costs of a proposed urban renewal project for the Garden Homes subdivision seemed to momentarily stagger members of the Ann Arbor City Council last night but the application for federal funds was approved in a near-unanimous vote.

The urban renewal project for the 80-acre subdivision on the city’s northwest side will cost in the neighborhood of $2.5 million, and there are presently some 65 families living in the subdivision.

Funds would be used for installation of water and sewer, a storm sewer system, road improvements, and general rehabilitation of the homes in the area.

“What is the city’s share." asked First Ward Councilman John Kirscht. The cash cost to Ann Arbor, councilmen were told, will total $633,066.

This marked the first time councilmen were formally notified of what the city’s cost would amount to and although the figure gave some councilmen pause they did not renege on what has become a commitment.

Asked how the city could put up its share of the costs, City Administrator Guy C. Larcom Jr. said the best way would be to sell rehabilitation bonds. Repayment of these bonds would have to come from the city’s general operating revenues and would cost about $50,000 annually for a 20-year period.

Under the first-year action program the city would be obligated to pay $559,066 and during the second year costs to Ann Arbor would be about $74,000. There would also be a commitment to pay some $73,000 for a park in the area.

Mayor Robert J. Harris, commenting that he favors the urban renewal project, said that the council would be setting the park as a top priority under the city’s parks bond issue adopted in April, and would be committing $50,000 for 20 years. “The problem has to be solved, there’s no other way to do it,” Harris said.

But the mayor added, “It’s a crusher, that’s five city employees per year.”

A series of resolutions giving the go-ahead for the grant application was approved in a 9 to 1 vote, with Third Ward Councilman Joseph W. Edwards casting the lone no vote. After the meeting, Edwards said he voted “no” because when Garden Homes was annexed in 1969 it was the understanding at that time that improvements would not cost the city any dollars.

Provided the federal government approves the grant, construction work would be under way next year.