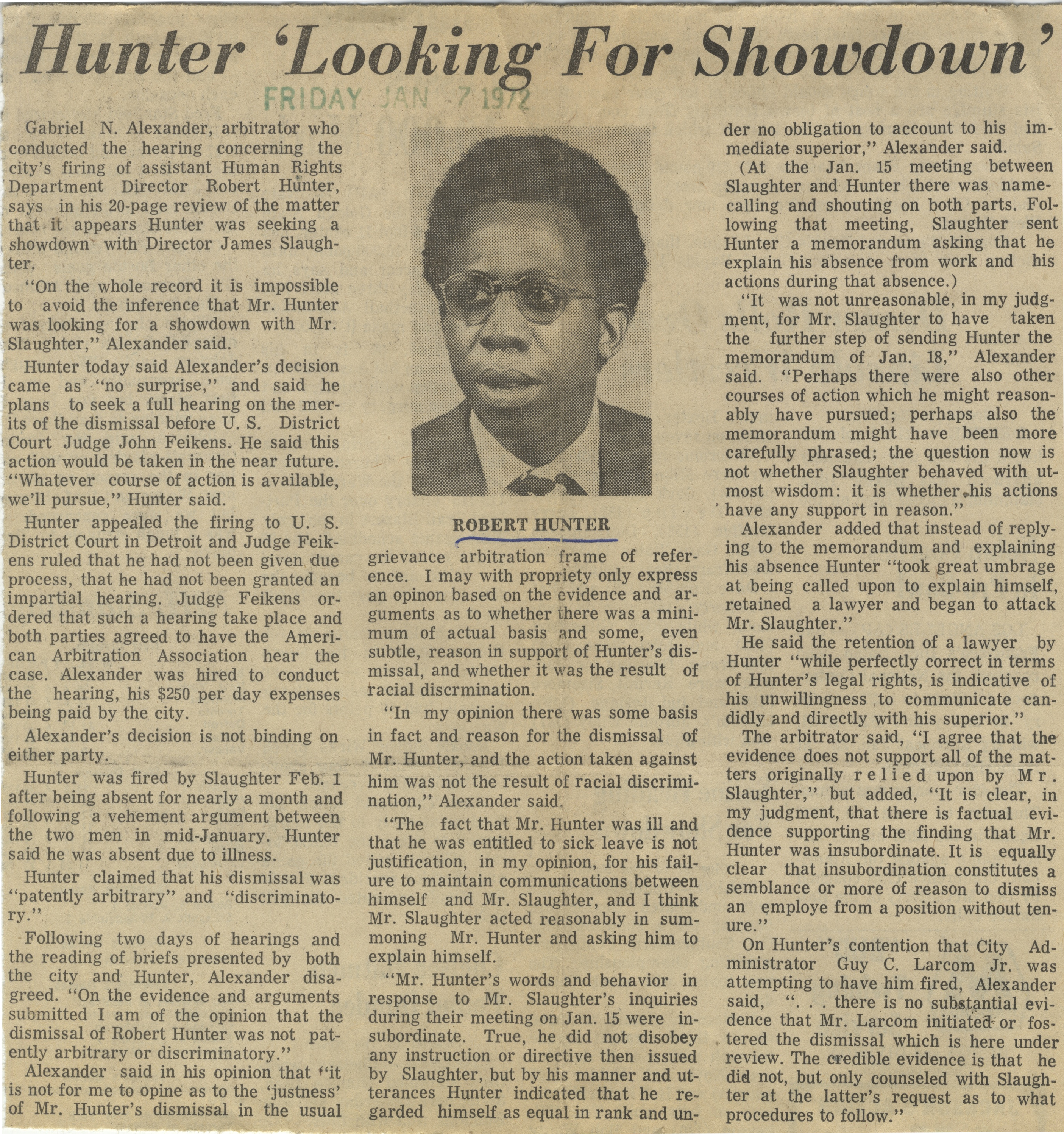 Gabriel N. Alexander, arbitrator who conducted the hearing concerning the city’s firing of assistant Human Rights Department Director Robert Hunter, says in his 20-page review of the matter that it appears Hunter was seeking a showdown with Director James Slaughter.

“On the whole record it is impossible to avoid the inference that Mr. Hunter was looking for a showdown with Mr. Slaughter,” Alexander said.

Hunter today said Alexander’s decision came as “no surprise,” and said he plans to seek a full hearing on the merits of the dismissal before U. S. District Court Judge John Feikens. He said this action would be taken in the near future. “Whatever course of action is available, we’ll pursue,” Hunter said.

Hunter appealed the firing to U. S. District Court in Detroit and Judge Feikens ruled that he had not been given due process, that he had not been granted an impartial hearing. Judge Feikens ordered that such a hearing take place and both parties agreed to have the American Arbitration Association hear the case. Alexander was hired to conduct the hearing, his $250 per day expenses being paid by the city.

Alexander’s decision is not binding on either party.

Hunter was fired by Slaughter Feb. 1 after being absent for nearly a month and following a vehement argument between the two men in mid-January. Hunter said he was absent due to illness.

Hunter claimed that his dismissal was “patently arbitrary” and “discriminatory.”

Following two days of hearings and the reading of briefs presented by both the city and Hunter, Alexander disagreed. “On the evidence and arguments submitted I am of the opinion that the dismissal of Robert Hunter was not patently arbitrary or discriminatory.”

Alexander said in his opinion that "it is not for me to opine as to the ‘justness’ of Mr. Hunter’s dismissal in the usual grievance arbitration frame of reference. I may with propriety only express an opinion based on the evidence and arguments as to whether there was a minimum of actual basis and some, even subtle, reason in support of Hunter’s dismissal, and whether it was the result of racial discrimination.

“In my opinion there was some basis in fact and reason for the dismissal of Mr. Hunter, and the action taken against him was not the result of racial discrimination,” Alexander said.

“The fact that Mr. Hunter was ill and that he was entitled to sick leave is not justification, in my opinion, for his failure to maintain communications between himself and Mr. Slaughter, and I think Mr. Slaughter acted reasonably in summoning Mr. Hunter and asking him to explain himself.

“Mr. Hunter’s words and behavior in response to Mr. Slaughter’s inquiries during their meeting on Jan. 15 were insubordinate. True, he did not disobey any instruction or directive then issued by Slaughter, but by his manner and utterances Hunter indicated that he regarded himself as equal in rank and under no obligation to account to his immediate superior,” Alexander said.

(At the Jan. 15 meeting between Slaughter and Hunter there was name-calling and shouting on both parts. Following that meeting, Slaughter sent Hunter a memorandum asking that he explain his absence from work and his actions during that absence.)

"It was not unreasonable, in my judgment, for Mr. Slaughter to have taken the further step of sending Hunter the memorandum of Jan. 18,” Alexander said. “Perhaps there were also other courses of action which he might reasonably have pursued; perhaps also the memorandum might have been more carefully phrased; the question now is not whether Slaughter behaved with utmost wisdom: it is whether his actions have any support in reason.”

Alexander added that instead of replying to the memorandum and explaining his absence Hunter “took great umbrage at being called upon to explain himself, retained a lawyer and began to attack Mr. Slaughter.”

He said the retention of a lawyer by Hunter “while perfectly correct in terms of Hunter’s legal rights, is indicative of his unwillingness to communicate candidly and directly with his superior.”

The arbitrator said, “I agree that the evidence does not support all of the matters originally relied upon by Mr. Slaughter,” but added, “It is clear, in my judgment, that there is factual evidence supporting the finding that Mr. Hunter was insubordinate. It is equally clear that insubordination constitutes a semblance or more of reason to dismiss an employe from a position without tenure."

On Hunter’s contention that City Administrator Guy C. Larcom Jr. was attempting to have him fired, Alexander said, “. . . there is no substantial evidence that Mr. Larcom initiated or fostered the dismissal which is here under review. The credible evidence is that he did not, but only counseled with Slaughter at the latter’s request as to what procedures to follow.”