High Schools Ready For Girl Athletes - If It's Legal 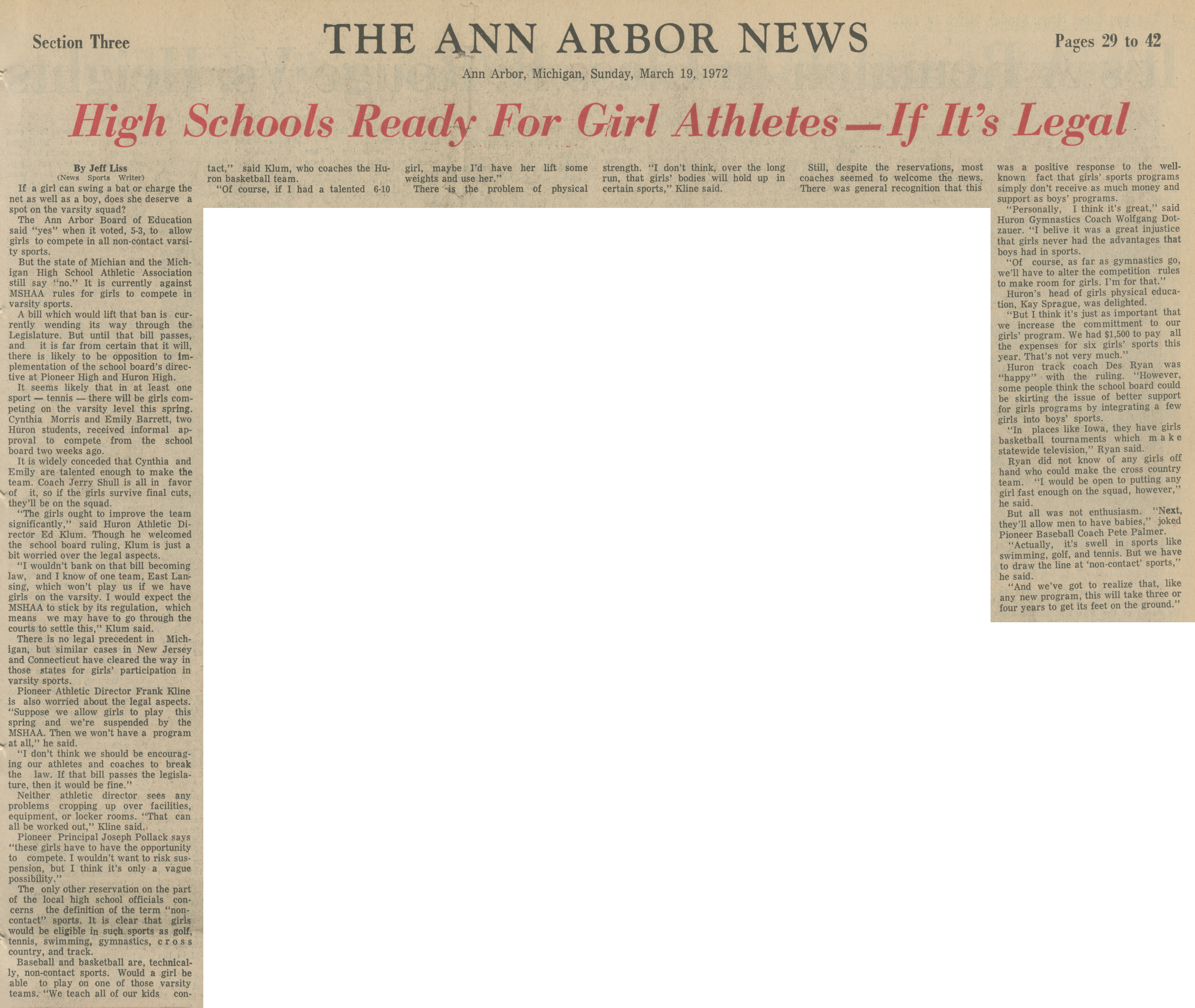 If a girl can swing a bat or charge the net as well as a boy, does she deserve a ■spot on the varsity squad? The Ann Arbor Board of Education ■said "yes" when it voted, 5-3, to allow ■girls to compete in all non-contact varsi■ty sports. I But the state of Michian and the Michigan High School Athletic Association ■still say "no." It is currently against ■MSHAA rules for girls to compete in ■varsity sports. A bilí which would lift that ban is cur■rently wending its way through the ■Legislatura. But until that bill passes, land it is far from certain that it will, ■there is likely to be opposition to imIplementation of the school board's direcItive at Pioneer High and Huron High. It seems likely that in at least one Isport - tennis - there will be girls comIpeting on the varsity level this spring. ICynthia Morris and Emily Barrett, two iHuron students, received informal apIproval to compete from the school [board two weeks ago. It is widely conceded that Cynthia and lEmily are talented enough to make the team. Coach Jerry Shull is all in favor of it, so if the girls survive final cuts, they'll be on the squad. "The girls ought to improve the team significantly," said Huron Athletic Director Ed Klum. Though he welcomed the school board ruling, Klum is just a bit worried over the legal aspects. "I wouldn't bank on that bill becoming law, and I know of one team, East Lansing, which -won't play us if we have girls on the varsity. I would expect the MSHAA to stick by its regulation, which means we may have to go through the courts to settle this," Klum said. There is nö legal precedent in Michigan, but similar cases in New Jersey and Connectieut have cleared the way in those states for girls' participation in varsity sports. Pioneer Athletic Director Frank Kline is also worried about the legal aspects. "Suppose we allow girls to play this spring and we're suspended by the MSHAA. Then we won't have a program at all," he said. "I don't think we should be encouraging our athletes and coaches to break the law. If that bill passes the legislature, then it would be fine." Neither athletic director sees any problems cropping up over facilities, equipment, or locker rooms. "That can all be worked out," Kline said. Pioneer Principal Joseph Pollack says "these girls have to have the opportunity to compete. I wouldn't want to risk suspension, but I think it's only a vague possibility." The only other reservation on the part of the local high school officials concerns the definition of the term "noncontact" sports. It is clear that girls would be eligible in such sports as golf, tennis, swimming, gymnastics, cross country, and track. I Baseball and basketball are, I ly, non-contact sports. Would a girl be I able to play on pne of those varsity I teams. "We teach all of our kids I lactT5 said lOum.'whó coaches the i I ron basketball team. I "Of course, if I had a talented 6-10 I fgirl, maybe I'd have her lift some weights and use her." There is the problem of physical strength. "I don't think, over the long run, that girls' bodies. will hold up in certain sports," Kline said. Still, despite the reservations, most I coaches seemed to weieome the news. I There was general recognition that this I was a positive response to the 1 known fact that girls' sports programs I simply don't receive as much money and I support as boys' programs. "Personally, I think it's great," said I Huron Gymnastics Coach Wolfgang I zauer. "I belive it was a great injustice I that girls never had the advantages that I boys had in sports. "Of course, as far as gymnastics go, I we '11 have to alter the competition rules I to make room for girls. I'm for that." I Huron's head of girls physical I tion, Kay Sprague, was delighted. üut 1 tñmk ït's just as important that we increase the committment to our girls' program. We had $1,500 to pay all the expenses for six girls' sports this year. That's not very much." Huron track coach Des Ryan was "happy" with the ruling.. "However, some people think the school board could be skirting the issue of better support for girls programs by integrating a few girls into boys' sports. "In places like Iowa, they have girls basketball tournaments which m a k e statewide televisión," Ryan said. Ryan did not know of any girls off j hand who could make the cross country team. "I would be open to putting any girl fast enough on the squad, however," he said. But all was not enthusiasm. "Next, I they'll allow men to have babies," joked I Pioneer Baseball Coach Pete Palmer. I "Actually, it's swell in sports like I swimming, golf, and tennis. But we have I to draw the line at 'non-contact' sports," I he said, "And we've got to realize that, like I any hew program, this will take three or I four years to get its feet on the ground." I