Things At Standstill in Sumpter Township 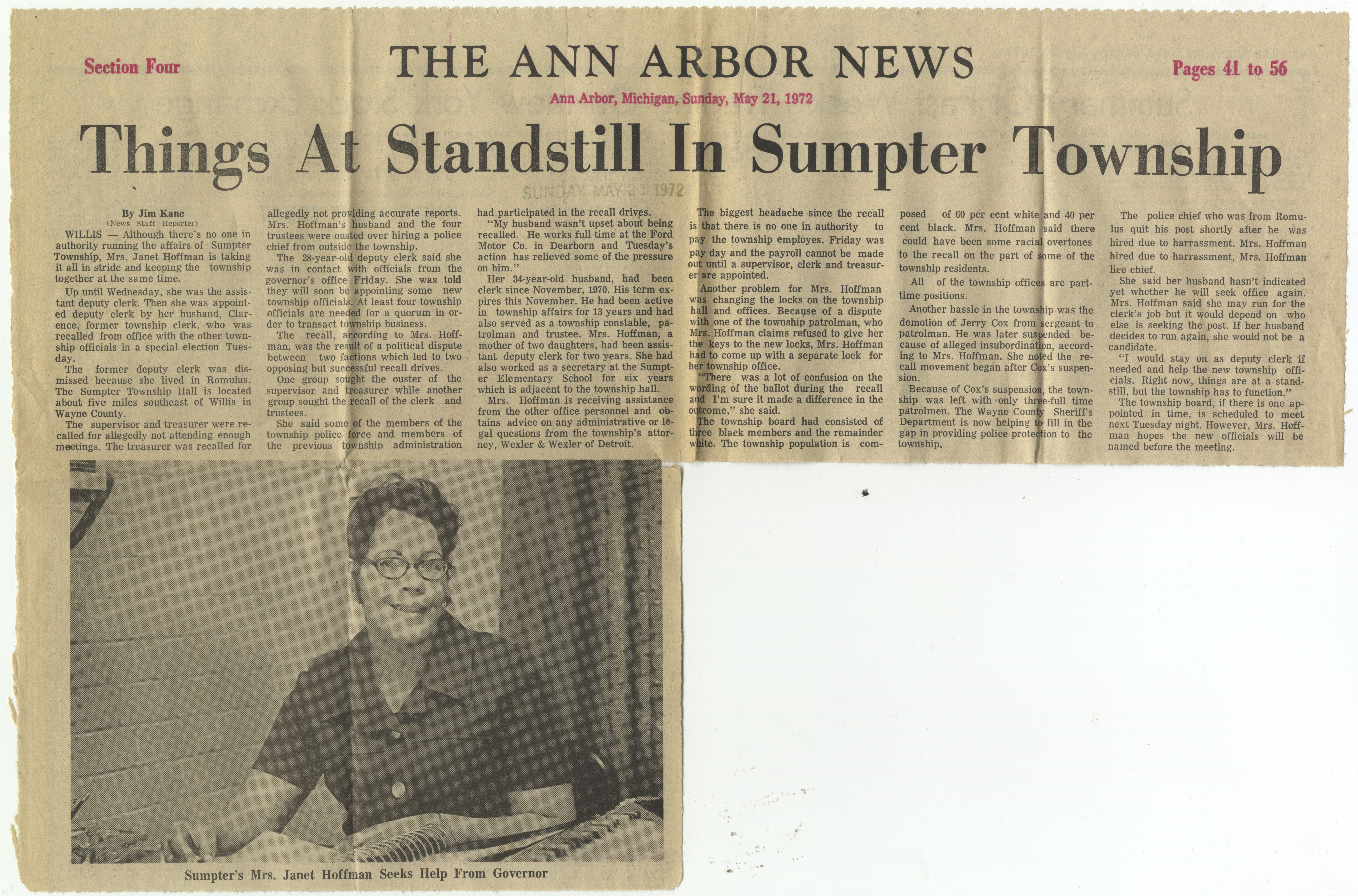 Things At Standstill In Su^p+er Township

WILLIS — Although there's no one in
authority running the affairs of Sumpter
Township, Mrs. Janet Hoffman is taking
it all in stride and keeping the township
together at the same time.

Up until Wednesday, she was the assis-
tant deputy clerk. Then she was appoint-
ed deputy clerk by her husband, Clar-
ence, former township clerk, who was
recalled from office with the other town-
ship officials in a special election Tues-
day.

The former deputy clerk was dis-
miss;'' ' cause she lived in Romulus.
The ler Township Hall is located
about live miles southeast of Willis in
Wayne County.

The supervisor and treasurer were re-
called for allegedly not attending enough
meetings. The treasurer was recalled for

allegedly not providing ' reports.
Mrs. Hoffman's husband ana the four
trustees were ousted over hiring a police
(' ' ' ' 'm outside the township.

'1-year-c'id deputy clerk said she
way in contact with officials from the
governor's office Friday. She was told
they will soon be appointing some new
township official;-;. At least four township
officia' 'ed " ir a quorum in or-
der t( ip business.

The recan, iccoraing to Mrs. Hoff-
man, was the result of a political dispute
between two factions which led to two
opposing but successful recall drives.

One group s: ught the ouster of the
supervisor and treasurer while another
group sought the recall of the clerk and
trustees.

had participated in the recall drivps.

"My husband wasn't upset about being
recalled. He works full time at the Ford
Motor Co. in Dearborn and Tuesday's
action has relieved some of the pressure
on him."

Her 34-year-old husband, had been
clerk since November, 1970. His term ex-
pires this November. He had been active
in town-'^" -'fairs for 13 years and had
also ser township constable, pa-
trolman anu trustee. Mrs. Hoffman, a
mother of two daughters, had been assis-
tant deputy clerk for two years. She had
also worked as a secretary at the Sumpt-
er Elementary School for six years
which is adjacent to the township hall.

Mrs. Hoffman is receh""'-' "-stance
from the other office per d ob-
tains advice on any admuu.inauvu or le-
gal questions from the township's attor-
ney, Wexler & Wexler of Detroit.

'Jpe biggest headache since the recall
is that there is no one in authority to
pay the township employes. Friday was
pay day and the payroll cannot be made
out until a supervisor, clerk and treasur-
er are appointed.

Another problem for Mrs. Hoffman
wa| changing the locks on the township
hall and offices. Because of a dispute
with one of the township patrolman, who
Meg, Hoffman claims refused to give her
th|jkeys to the new locks, Mrs. Hoffman
halt-to come up with a separate lock for
hei|township office.

"There was a lot of confusion on the
• ording of the ballot during the recall
(isid I'm sure it made a difference in the
outcome," she said.

The township board had consisted of
thSree black members and the remainder
wpte. The township population is com-

posed of 60 per cent white and 40 per
cent black. Mrs. Hoffman said there
could have been some racial overtones
to the recall on the part of some of the
township resident-.

All of the ton,, ijices are part-
time positions.

Another hassle in the townsh'" woe the
demotion of Jerry Cox fro o
patrolman. He was later suspenued be-
cause of alleged insubordination, accord-
ing to Mrs. Hoffman. She noted the re-
call movement began after Cox s suspen-
sion.

Because of Cox's suspension, the town-
ship was left with only three-full time
patrolmen. The Wayne Couny Sheriff's
Department is now helping ft fill in the
gap in providing police protection to the
township.

She sai . -,.sband hasn't indicated
yet whether he will seek office again.
Mrs. Hoffman said she may run for the
clerk's job but it would depend on who
else is seeking the post. If her husband
decides to run again, she woi!' •'• ^ie a
candidate.

"I would stay on as deputy clerk if
needed and help the new township offi-
cials. Right now, things are at a stand-
still, but the township has to function."

The township board, if there is one ap-
pointed in time, is scheduled to meet
next Tuesday night. However, Mrs. Hoff-
man hopes the new officials will be
named befc • th- meeting.