An Answer To 'Bottomless Glass'? 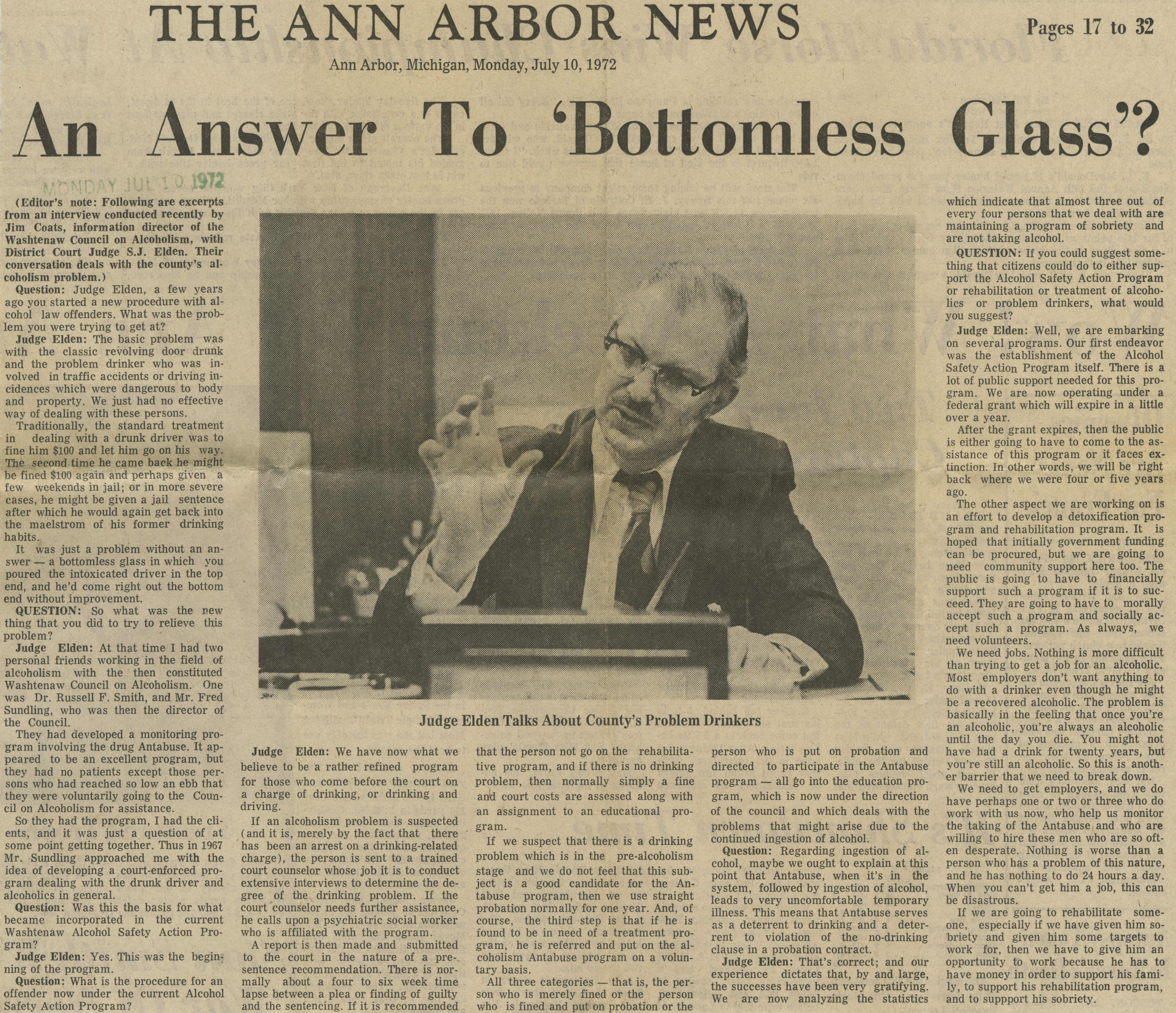 An Answer To ‘Bottomless Glass’?

(Editor's note: Following are excerpts from an interview conducted recently by Jim Coats, information director of the Washtenaw Council on Alcoholism, with District Court Judge S.J. Elden. Their conversation deals with the county's alcoholism problem.)

Question: Judge Elden, a few years ago you started a new procedure with alcohol law offenders. What was the problem  you were trying to get at?

Judge Elden: The basic problem was with the classic revolving door drunk and the problem drinker who was involved in traffic accidents or driving incidences which were dangerous to body and property. We just had no effective way of dealing with these persons.

Traditionally, the standard treatment in dealing with a drunk driver was to fine him $100 and let him go on his way. The second time he came back he might be fined $100 dollars again and perhaps given a few weekends in jail; or in more severe cases, he might be given a jail sentence after which he would again get back into the maelstrom of his former drinking habits.

It was just a problem without an answer-a bottomless glass in which you poured the intoxicated driver in the top end, and he'd come right out the bottom end without improvement.

Question: So what was the new thing that did to try to relieve this problem?

Judge Elden: At that time, I had two personal friends working in the field of alcoholism with the then constituted Washtenaw Council on Alcoholism. One was Dr. Russell F. Smith, and Mr. Fred Sundling, who was then the director of the Council.

They had developed a monitoring program involving the drug Antabuse. It appeared to be an excellent program, but they had no patients except those persons who had reached so low an ebb that they were voluntarily going to the Council on Alcoholism for assistance.

So they had the program, I had the clients, and it was just a question of at some point getting together. Thus in 1967 Mr. Sundling approached me with the idea of developing a court-enforced program dealing with the drunk driver and alcoholics in general.

Question: Was this the basis for what became incorporated in the current Washtenaw Alcohol Safety Action Program.

Judge Elden: Yes. This was the beginning of the program.

Question: What is the procedure for an offender now under the current Alcohol Safety Action Program?

Judge Elden: We have now what we believe to a rather refined program for those who come before the court on a charge of drinking, or drinking and driving.

If an alcoholism problem is suspected (and it is, merely by the fact that there has been an arrest on a drinking-related charge), the person is sent to a trained court counselor whose job it is to conduct extensive interviews to determine the degree of the drinking problem. If the court counselor needs further assistance, he calls upon a psychiatric social worker who is affiliated with the program.

A report is then made and submitted to the court in the nature of a presentence recommendation. There is normally about a four to six week time lapse between a plea or finding of guilty and the sentencing. If it is recommended that the person not go on the rehabilitative program, and if there is no drinking problem, then normally simply a fine and court costs are assessed along with an assignment to an educational program.

If we suspect that there is a drinking problem which is in the pre-alcoholism stage and we do not feel that this subject is a good candidate for the Antabuse program, then we straight probation normally for one year. And, of course, the third step is that if he is found to be in need of a treatment program, he is referred and put on the Alcoholism Antabuse program on a voluntary basis.

Judge Elden: That's correct, and our experience dictates that, by and large, the successes have been very gratifying. We are now analyzing the statistics which indicates that almost three out of every four persons that we deal with are maintaining a program of sobriety and are not taking alcohol.

Question: If you could suggest something that citizens could do to either support the Alcohol Safety Action Program or rehabilitation or treatment of alcoholics or problem drinkers, what would you suggest?

Judge Elden: Well, we are embarking on several programs. Our first endeavor was the establishment of the Alcohol Safety Action Program itself. There is a lot of public support needed for this program. We are now operation under a federal grant which will expire in a little over a year.

After the grant expires, then the public is either going to have to come to the assistance of this program or it faces extinction. In other words, we will be right back where we were four or five years ago.

We need jobs. Nothing is more difficult than trying to get a job for an alcoholic. Most employers don't want anything to do with a drinker even though he might be a recovered alcoholic. The problem is basically in the feeling that once you are an alcoholic, you're always an alcoholic until the day you die. You might not have had a drink for twenty years, but you're still an alcoholic. So this is another barrier that we need to break down.

We need to get employers, we do have perhaps one or two or three who do work with us now, who help us monitor the taking of the Antabuse and who are willing to hire these men who are so often desperate. Nothing is worse than a person who had a problem of this nature, and he has nothing to to 24 hours a day. When you can 't get him a job, this can be disastrous.