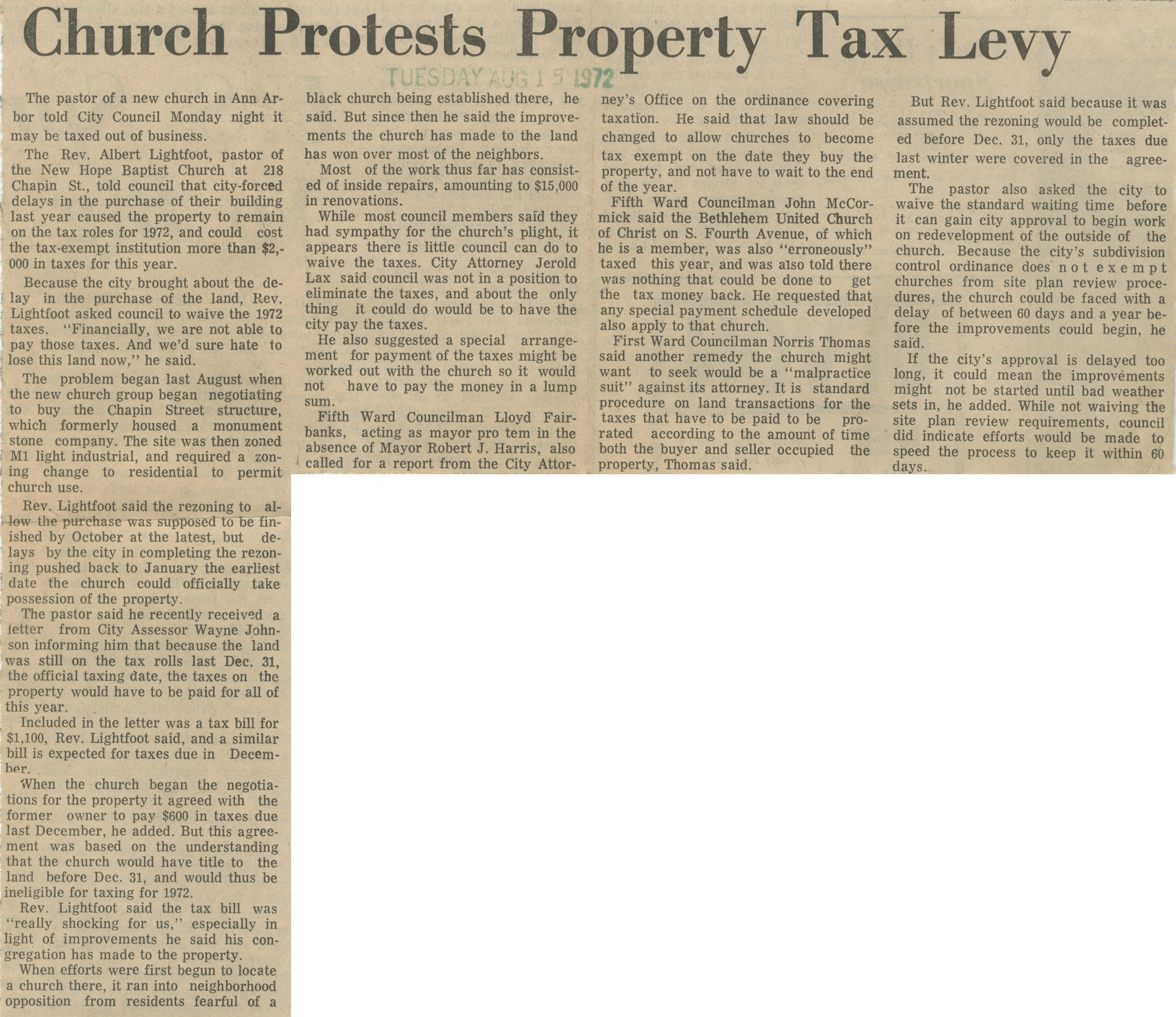 The pastor of a new church in Ann Arbor told City Council Monday night it may be taxed out of business.

The Rev. Albert Lightfoot, pastor of the New Hope Baptist Church at 218 Chapin St., told council that city-forced delays in the purchase of their building last year caused the property to remain on the tax roles for 1972, and could cost the tax-exempt institution more than $2,000 in taxes for this year.

Because the city brought about the delay in the purchase of the land, Rev. Lightfoot asked council to waive the 1972 taxes. “Financially, we are not able to pay those taxes. And we’d sure hate to lose this land now,” he said.

The problem began last August when the new church group began negotiating to buy the Chapin Street structure, which formerly housed a monument stone company. The site was then zoned M1 light industrial, and required a zoning change to residential to permit church use.

Rev. Lightfoot said the rezoning to allow the purchase was supposed to be finished by October at the latest, but delays by the city in completing the rezoning pushed back to January the earliest date the church could officially take possession of the property.

The pastor said he recently received a letter from City Assessor Wayne Johnson informing him that because the land was still on the tax rolls last Dec. 31, the official taxing date, the taxes on the property would have to be paid for all of this year.

Included in the letter was a tax bill for $1,100, Rev. Lightfoot said, and a similar bill is expected for taxes due in December.

When the church began the negotiations for the property it agreed with the former owner to pay $600 in taxes due last December, he added. But this agreement was based on the understanding that the church would have title to the land before Dec. 31, and would thus be ineligible for taxing for 1972.

Rev. Lightfoot said the tax bill was “really shocking for us,” especially in light of improvements he said his congregation has made to the property.

When efforts were first begun to locate a church there, it ran into neighborhood opposition from residents fearful of a black church being established there, he said. But since then he said the improvements the church has made to the land has won over most of the neighbors.

Most of the work thus far has consisted of inside repairs, amounting to $15,000 in renovations.

While most council members said they had sympathy for the church’s plight, it appears there is little council can do to waive the taxes. City Attorney Jerold Lax said council was not in a position to eliminate the taxes, and about the only thing it could do would be to have the city pay the taxes.

He also suggested a special arrangement for payment of the taxes might be worked out with the church so it would not have to pay the money in a lump sum.

Fifth Ward Councilman Lloyd Fairbanks, acting as mayor pro tern in the absence of Mayor Robert J. Harris, also called for a report from the City Attorney's Office on the ordinance covering taxation. He said that law should be changed to allow churches to become tax exempt on the date they buy the property, and not have to wait to the end of the year.

Fifth Ward Councilman John McCormick said the Bethlehem United Church of Christ on S. Fourth Avenue, of which he is a member, was also “erroneously” taxed this year, and was also told there was nothing that could be done to get the tax money back. He requested that any special payment schedule developed also apply to that church.

First Ward Councilman Norris Thomas said another remedy the church might want to seek would be a “malpractice suit” against its attorney. It is standard procedure on land transactions for the taxes that have to be paid to be prorated according to the amount of time both the buyer and seller occupied the property, Thomas said.

But Rev. Lightfoot said because it was assumed the rezoning would be completed before Dec. 31, only the taxes due last winter were covered in the agreement.

The pastor also asked the city to waive the standard waiting time before it can gain city approval to begin work on redevelopment of the outside of the church. Because the city’s subdivision control ordinance does not exempt churches from site plan review procedures, the church could be faced with a delay of between 60 days and a year before the improvements could begin, he said.

If the city's approval is delayed too long, it could mean the improvements might not be started until bad weather sets in, he added. While not waiving the site plan review requirements, council did indicate efforts would be made to speed the process to keep it within 60 days.