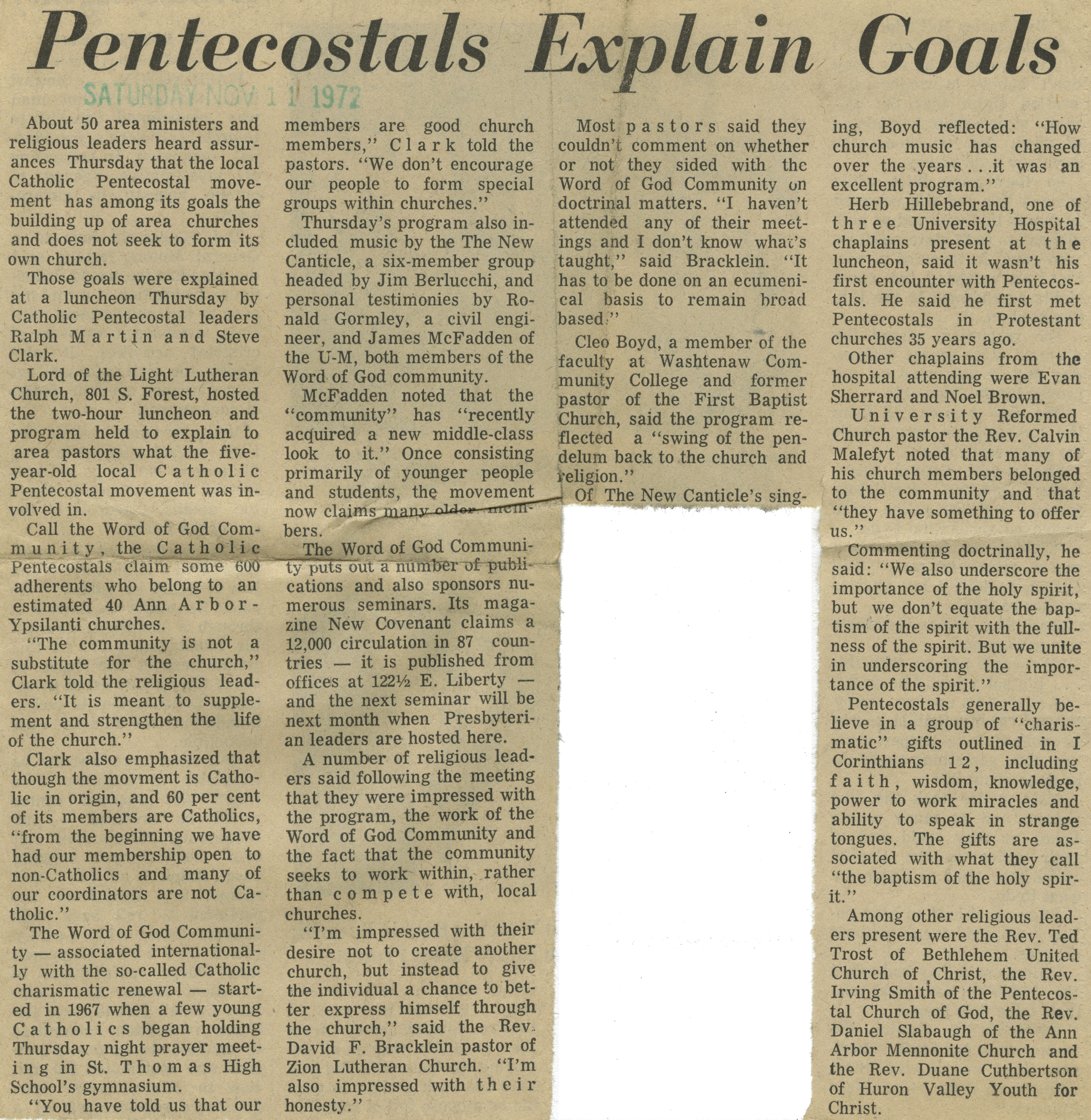 About 50 area ministers and religious leaders heard assurances Thursday that the local Catholic Pentecostal movement has among its goals the building up of area churches and does not seek to form its own church.

Those goals were explained at a luncheon Thursday by Catholic Pentecostal leaders Ralph Martin and Steve Clark.

Lord of the Light Lutheran Church, 801 S. Forest, hosted the two-hour luncheon and program held to explain to area pastors what the five-year-old local Catholic Pentecostal movement was involved in.

Call the Word of God Community, the Catholic Pentecostals claim some 600 adherents who belong to an estimated 40 Ann Arbor-Ypsilanti churches.

“The community is not a substitute for the church,” Clark told the religious leaders. “It is meant to supplement and strengthen the life of the church.”

Clark also emphasized that though the movement is Catholic in origin, and 60 per cent of its members are Catholics, “from the beginning we have had our membership open to non-Catholics and many of our coordinators are not Catholic.”

“You have told us that our members are good church members,” Clark told the pastors. “We don’t encourage our people to form special groups within churches.”

Thursday’s program also included music by the The New Canticle, a six-member group headed by Jim Berlucchi, and personal testimonies by Ronald Gormley, a civil engineer, and James McFadden of the U-M, both members of the Word of God community.

McFadden noted that the “community” has “recently acquired a new middle-class look to it.” Once consisting primarily of younger people and students, the movement now claims many older members.

The Word of God Community puts out a number of publications and also sponsors numerous seminars. Its magazine New Covenant claims a 12,000 circulation in 87 countries — it is published from offices at 122 ½ E. Liberty — and the next seminar will be next month when Presbyterian leaders are hosted here.

A number of religious leaders said following the meeting that they were impressed with the program, the work of the Word of God Community and the fact that the community seeks to work within, rather than compete with, local churches.

“I’m impressed with their desire not to create another church, but instead to give the individual a chance to better express himself through the church,” said the Rev David F. Bracklein pastor of Zion Lutheran Church. “I’m also impressed with their honesty.”
Most pastors said they couldn’t comment on whether or not they sided with the Word of God Community on doctrinal matters. “I haven’t attended any of their meetings and I don’t know what’s taught,” said Bracklein. “It has to be done on an ecumenical basis to remain broad based.”

Cleo Boyd, a member of the faculty at Washtenaw Community College and former pastor of the First Baptist Church, said the program reflected a “swing of the pendelum back to the church and religion.”

Of The New Canticle’s singing, Boyd reflected: “How church music has changed over the years . . .it was an excellent program.”

Herb Hillebebrand, one of three University Hospital chaplains present at the luncheon, said it wasn’t his first encounter with Pentecostals. He said he first met Pentecostals in Protestant churches 35 years ago.

Other chaplains from the hospital attending were Evan Sherrard and Noel Brown.

University Reformed Church pastor the Rev. Calvin Malefyt noted that many of his church members belonged to the community and that “they have something to offer us.”

Pentecostals generally believe in a group of “charismatic” gifts outlined in I Corinthians 12, including faith, wisdom, knowledge, power to work miracles and ability to speak in strange tongues. The gifts are associated with what they call “the baptism of the holy spirit.”

Among other religious leaders present were the Rev. Ted Trost of Bethlehem United Church of Christ, the Rev. Irving Smith of the Pentecostal Church of God, the Rev. Daniel Slabaugh of the Ann Arbor Mennonite Church and the Rev. Duane Cuthbertson of Huron Valley Youth for Christ.