U-M's Exhibit Museum: A Place To Contemplate A Bit 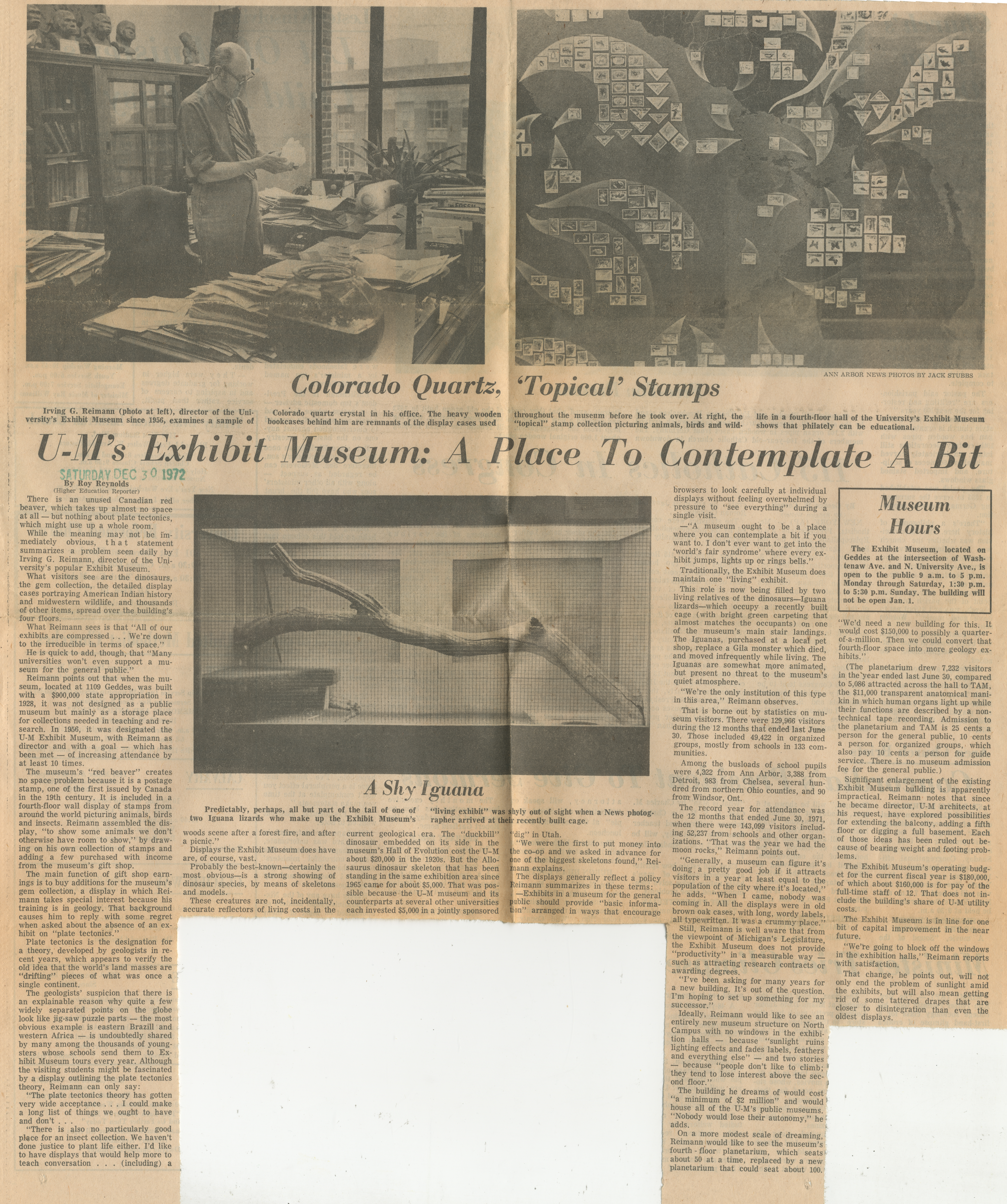 U-M’s Exhibit Museum: A Place To Contemplate A Bit

There is an unused Canadian red beaver, which takes up almost no space at all — but nothing about plate tectonics, which might use up a whole room.

While the meaning may not be immediately obvious, that statement summarizes a problem seen daily by Irving G. Reimann, director of the University’s popular Exhibit Museum.

What visitors see are the dinosaurs, the gem collection, the detailed display cases portraying American Indian history and midwestem wildlife, and thousands of other items, spread over the building’s four floors.

What Reimann sees is that “All of our exhibits are compressed . . . We’re down to the irreducible in terms of space.”

He is quick to add, though, that “Many universities won’t even support a museum for the general public.”

Reimann points out that when the museum, located at 1109 Geddes, was built with a $900,000 state appropriation in 1928, it was not designed as a public museum but mainly as a storage place for collections needed in teaching and research. In 1956, it was designated the U-M Exhibit Museum, with Reimann as director and with a goal — which has been met — of increasing attendance by at least 10 times.

The museum’s “red beaver” creates no space problem because it is a postage stamp, one of the first issued by Canada in the 19th century. It is included in a fourth-floor wall display of stamps from around the world picturing animals, birds and insects. Reimann assembled the display, “to show some animals we don’t otherwise have room to show,” by drawing on his own collection of stamps and adding a few purchased with income from the museum’s gift shop.

The main function of gift shop earnings is to buy additions for the museum’s gem collection, a display in which Reimann takes special interest because his training is in geology. That background causes him to reply with some regret when asked about the absence of an exhibit on “plate tectonics.”

Plate tectonics is the designation for a theory, developed by geologists in recent years, which appears to verify the old idea that the world’s land masses are “drifting” pieces of what was once a single continent.

The geologists’ suspicion that there is an explainable reason why quite a few widely separated points on the globe look like jig-saw puzzle parts — the most obvious example is eastern Brazill and western Africa — is undoubtedly shared by many among the thousands of youngsters whose schools send them to Exhibit Museum tours every year. Although the visiting students might be fascinated by a display outlining the plate tectonics theory, Reimann can only say:

“The plate tectonics theory has gotten very wide acceptance ... I could make a long list of things we ought to have and don’t . . .

“There is also no particularly good place for an insect collection. We haven’t done justice to plant life either. I’d like to have displays that would help more to teach conversation...(including) a woods scene after a forest fire, and after a picnic.”

Displays the Exhibit Museum does have are, of course, vast.

Probably the best-known—certainly the most obvious—is a strong showing of dinosaur species, by means of skeletons and models.

These creatures are not, incidentally, accurate reflectors of living costs in the current geological era. The “duckbill” dinosaur embedded on its side in the museum’s Hall of Evolution cost the U-M about $20,000 in the 1920s. But the Allosaurus dinosaur skeleton that has been standing in the same exhibition area since 1965 came for about $5,000. That was possible because the U-M museum and its counterparts at several other universities each invested $5,000 in a jointly sponsored “dig” in Utah.

“We were the first to put money into the co-op and we asked in advance for one of the biggest skeletons found,” Reimann explains.

—Exhibits in a museum for the general public should provide “basic information” arranged in ways that encourage browsers to look carefully at individual displays without feeling overwhelmed by pressure to “see everything” during a single visit.

—“A museum ought to be a place where you can contemplate a bit if you want to. I don’t ever want to get into the ‘world’s fair syndrome’ where every exhibit jumps, lights up or rings bells.”

“ Traditionally, the Exhibit Museum does maintain one “living” exhibit.

This role is now being filled by two living relatives of the dinosaur—Iguana lizards—which occupy a recently built cage (with bright green carpeting that almost matches the occupants) on one of the museum’s main stair landings. The Iguanas, purchased at a local pet shop, replace a Gila monster which died, and moved infrequently while living. The iguanas are somewhat more animated, but present no threat to the museum’s quiet atmosphere.

“We’re the only institution of this type in this area,” Reimann observes.

That is borne out by statistics on museum visitors. There were 129,966 visitors during the 12 months that ended last June 30. Those included 49,422 in organized groups, mostly from schools in 133 communities.

Among the busloads of school pupils were 4,322 from Ann Arbor, 3,388 from Detroit, 983 from Chelsea, several hundred from northern Ohio counties, and 90 from Windsor, Ont.

The record year for attendance was the 12 months that ended June 30, 1971, when there were 143,099 visitors including 52,237 from schools and other organizations. “That was the year we had the moon rocks,” Reimann points out.

“Generally, a museum can figure it’s doing a pretty good job if it attracts visitors in a year at least equal to the population of the city where it’s located,” he adds. “When I came, nobody was coming in. All the displays were in old brown oak cases, with long, wordy labels, all typewritten. It was a crummy place.’’’

Still, Reimann is well aware that from the viewpoint of Michigan’s Legislature, the Exhibit Museum does not provide “productivity” in a measurable way — such as attracting research contracts or awarding degrees.

“I’ve been asking for many years for a new building. It’s out of the question. I’m hoping to set up something for my successor.”

Ideally, Reimann would like to see an entirely new museum structure on North Campus with no windows in the exhibition halls — because “sunlight ruins lighting effects and fades labels, feathers and everything else” — and two stories — because “people don’t like to climb; they tend to lose interest above the second floor.”

The building he dreams of would cost “a minimum of $2 million” and would house all of the U-M’s public museums. “Nobody would lose their autonomy,” he adds.

On a more modest scale of dreaming, Reimann would like to see the museum’s fourth-floor planetarium, which seats' about 50 at a time, replaced by a new planetarium that could seat about 100.

“We’d need a new building for this. It would cost $150,000 to possibly a quarter-of-a-million. Then we could convert that fourth-floor space into more geology exhibits.”

Significant enlargement of the existing Exhibit Museum building is apparently impractical. Reimann notes that since he became director, U-M architects, at his request, have explored possibilities for extending the balcony, adding a fifth floor or digging a full basement. Each of those ideas has been ruled out because of bearing weight and footing problems.

The Exhibit Museum’s operating budget for the current fiscal year is $180,000, of which about $160,000 is for pay of the full-time staff of 12. That does not include the building’s share of U-M utility costs.

The Exhibit Museum is in line for one bit of capital improvement in the near future.

“We're going to block off the windows in the exhibition halls,” Reimann reports with satisfaction.

That change, he points out, will not only end the problem of sunlight amid the exhibits, but will also mean getting rid of some tattered drapes that are closer to disintegration than even the oldest displays.

Irving G. Reimann (photo at left), director of the University's Exhibit Museum since 1956 examines a sample of Colorado quartz crystal in his office. The heavy wooden bookcases behind him are remnants of the display cases used throughout the museum before he took over. At right, the "topical" stamp collection picturing animals, birds and wildlife in a fourth-floor hall of the University's Exhibit Museum shows that philately can be educational.