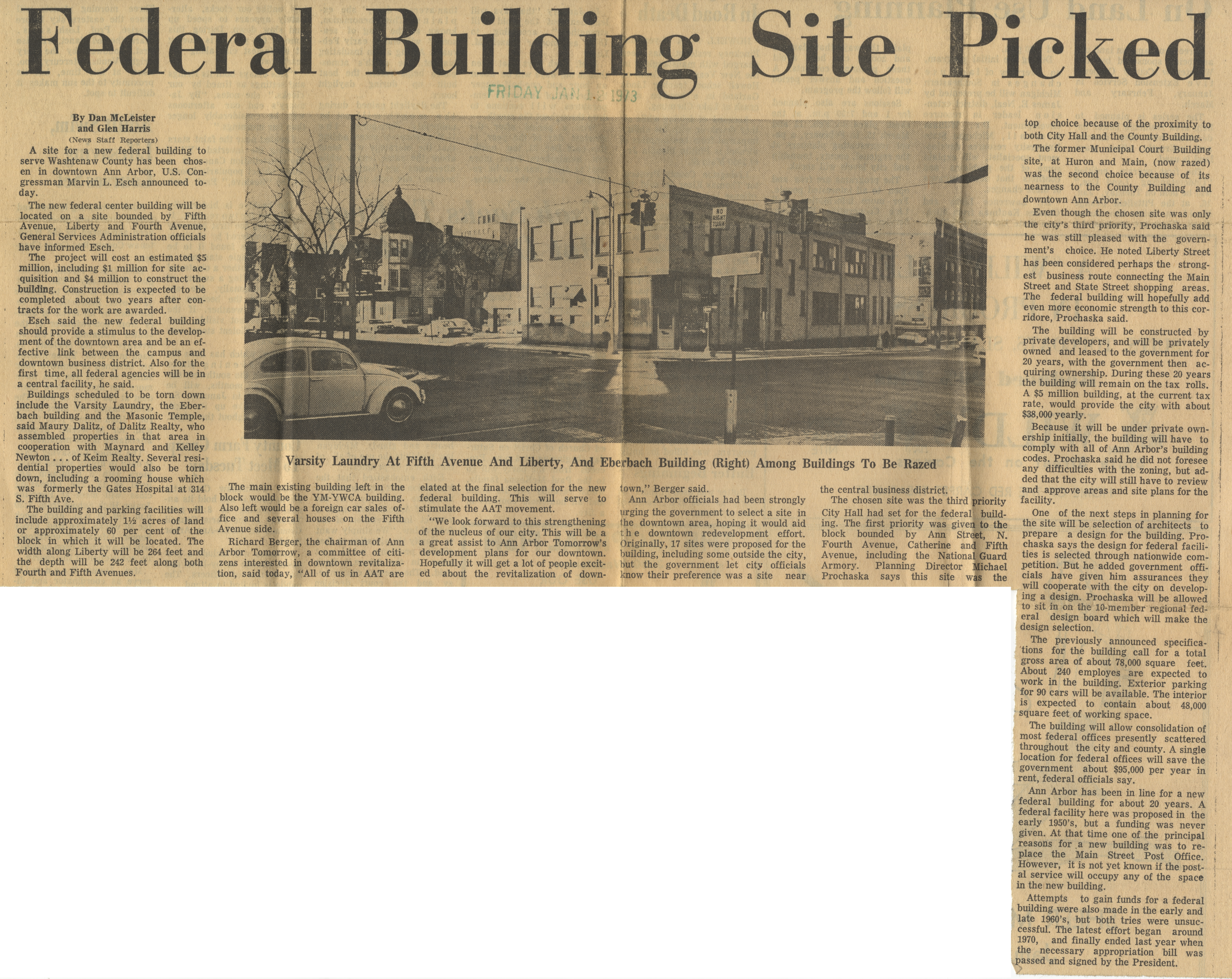 By Dan McLeister
and Glen Harris

The new federal center building will be
located on a site bounded by Fifth
Avenue, Liberty and Fourth Avenue,
General Services Administration officials
have informed Esdi.

The project will cost an estimated $5
million, including $1 million for site ac-
quisition and $4 million to construct the
building. Construction is expected to be
completed about two years after con-
tracts for the work are awarded.

Esch said the new federal building
should provide a stimulus to the develop-
ment of the downtown area and be an ef-
fective link between the campus and
downtown business district. Also for the
first time, all federal agencies will be in
a central facility, he said.

Buildings scheduled to be torn down
include the Varsity Laundry, the Eber-
bach building and the Masonic Temple,
said Maury Dalitz, of Dalitz Realty, who
assembled properties in that area in
cooperation with Maynard and Kelley
Newton ... of Keim Realty. Several resi-
dential properties would also be torn
down, including a rooming house which
was formerly the Gates Hospital at 314
S. Fifth Ave.

The building and parking facilities will
include approximately 1V2 acres of land
or approximately 60 per cent of the
block in which it will be located. The
width along Liberty will be 264 feet and
the depth will be 242 feet along both
Fourth and Fifth Avenues.

Varsity Laundry At Fifth Avenue And Liberty, And Ebecbarh Building (Right) Among Buildings To Be Razed

The main existing building left in the
block would be the YM-YWCA building.
Also left would be a foreign car sales of-
fice and several houses on the Fifth
Avenue side.

Richard Berger, the chairman of Ann
Arbor Tomorrow, a committee of citi-
zens interested in downtown revitaliza-
tion, said today, "All of us in AAT are

elated at the final selection for the new
federal building. This will serve to
stimulate the AAT movement.

"We look forward to this strengthening
of the nucleus of our city. This will be a
a great assist to Ann Arbor Tomorrow's
development plans for our downtown.
Hopefully it will get a lot of people excit-
ed about the revitalization o^

Ann Arbor officials had been strongly
urging the gover' select a site in
ihe downtown ar< ; , .ng it would aid
i h e downtown redevelopment effort.
Originally, 17 sites were proposed for the
building, including some outside the city,
but the government let city officials

now their preference was a site near

The chosen site was the third priority
City Hall had set for the federal build-
ing. The first priority was given to the
block bounded by Ann Street, N.
Fourth Avenue, Catherine and.Fifth
Avenue, including the NationalBuard
Armory. Planning Director BEchael
Prochaska says this site was the

top choice because of the proximity to
both City Hall and the County Building.

The former Municipal Court Building
site, at Huron and Main, (now razed)
was the second choice because of its
nearness to the County Building and
downtown Ann Arbor.

Even though the chosen site was only
the city's third priority, Prochaska said
he was still pleased with the govern-
ment's choice. He noted Liberty Street
has been considered perhaps the strong-
est business route connecting the Main
Street and State Street shopping areas.
The federal building will hopefully add
even more economic strength to this cor-
ridore, Prochaska said.

The building will be constructed by
private developers, and will be privately
owned and leased to the government for
20 years, with the government then ac-
quiring ownership. During these 20 years
the building will remain on the tax rolls.
A $5 million building, at the current tax
rate, would provide the city with about
$38,000 yearly.

Because it will be under private own-
ership initially, the building will have to
comply with all of Ann Arbor's building
codes. Prochaska said he did not foresee
any dif' " zoning, but ad-
ded thai i!;i ••;!.;. i • 1 have to review
and -approve areas and site plans for the
facility.

One of the next steps in planning for
the site will be selection of architects to
prepare a design for the building. Pro-
chaska says the design for federal facili-
ties is selected through nationwide com-
petition. But he added government offi-
cials have given him assurances they
will cooperate with the city on develop-
ing a design. Prochaska will be allowed
to sit in on the 10-member regional fed-
eral design board which will make the
design selection.

The previously announced specifica-
tions for the building call for a total
gross area of about 78,000 square feet.
About 240 employes are expected to
. work in the building. Exterior parking
for 90 cars will be available. The interior
is expected to contain about 48,000

- Ann Arbor has been in line for a new
/ federal building for about 20 years. A
federal facility here was proposed in the
early 1950's, but a f: " i ;-'r
given. At that time o' ,\l
reasons for a new building was to re-
place the Main Street Post Office.
However, it is not yet known if the post-
" al service will occupy any of the space
in the; new building.

Attempts to gain funds for a federal
building were also made in the early and
late 1960's, but both tries were unsuc-
. cessful. The latest effort began arc ••"•!
I 1970, and finally ended last year •vvm';.
^ the necessary appropriation bill was
^passed and signed by the President.
^Sn&,... . J