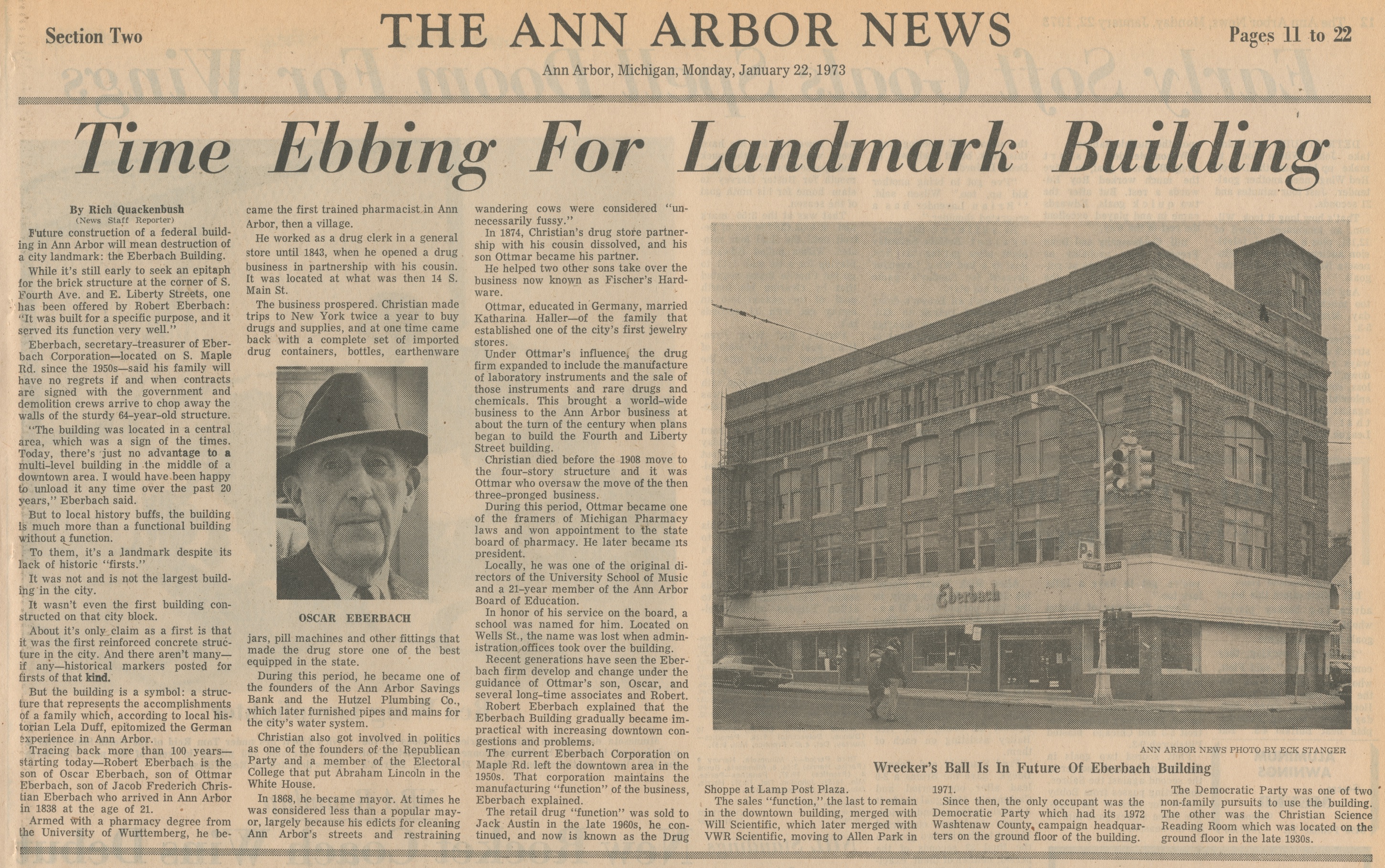 While it's still early to seek an epitaph for the brick structure at the corner of S. Fourth Ave. and E. Liberty Streets, one has been offered by Robert Eberbach:  "It was built for a specific purpose, and it served its function very well."

Eberbach, secretary-treasurer of Eberbach Corporation-located on S. Maple Rd. since the 1950's-said his family will have no regrets if and when contracts are signed with the government and demolition crews arrive to chop away the walls of the sturdy 64-year-old structure.

"The building was located in a central area, which was a sign of the times.  Today there's just no advantage to a multi-level building in the middle of a downtown area.  I would have been happy to unload it any time over the past 20 years," Eberbach said.

But to local history buffs, the building is much more than a functional building without a function.

To them, it's a landmark despite its lack of historic "firsts."

It was not and is not the largest building in the city.

It wasn't even the first building constructed on that city block.

About its only claim as a first is that it was the first reinforced concrete structure in the city.  And there aren't many-if any-historical markers posted for firsts of that kind.

But the building is a symbol:  a structure that represents the accomplishments of a family which, according to local historian Lela Duff, epitomized the German experience in Ann Arbor.

Armed with a pharmacy degree from the University of Wurttemberg, he became the first trained pharmacist in Ann Arbor then a village.

He worked as a drug clerk in a general store until 1843, when he opened a drug business in partnership with his cousin.  It was located at what was when 14 S. Main St.

The business prospered.  Christian made trips to New York twice a year to buy drugs and supplies, and at one time came back with a complete set of imported drug containers, bottles, earthenware jars, pill machines and other fittings that made the drug store one of the best equipped in the state.

During this period, he became one of the founders of the Ann Arbor Savings Bank and the Hutzel Plumbing Co., which later furnished pipes and mains for the city's water system.

Christian also got involved in politics as one of the founders of the Republican Party and a member of the Electoral College that put Abraham Lincoln in the White House.

In 1868, he became mayor.  At times he was considered less than a popular mayor, largely because his edicts for cleaning Ann Arbor's streets and restraining wandering cows were considered "unnecessarily fussy."

In 1874, Christian's drug store partnership with his cousin dissolved, and his son Ottmar became his partner.

He helped two other sons take over the business now known as Fischer's Hardware.

Ottmar, educated in Germany, married Katharina Haller-of the family that established one of the city's first jewelry stores.

Under Ottmar's influence, the drug firm expanded to include the manufacture of laboratory instruments and the sale of those instruments and rare drugs and chemicals.  This brought a world-wide business to the Ann Arbor business at about the turn of the century when plans began to build the Fourth and Liberty Street building.

Christian died before the 1908 move to the four story structure and it was Ottmar who oversaw the move of the then three-pronged business.

During this period, Ottmar became one of the framers of Michigan Pharmacy laws and won appointment to the state board of pharmacy.  He later became its president.

Locally, he was one of the original directors of the University School of Music and a 21-year member of the Ann Arbor Board of Education.

In honor of his service on the board, a school was named for him.  Located on Wells St., the name was lost when administration offices took over the building.

Recent generations have seen the Eberbach firm develop and change under the guidance of Ottmar's son, Oscar, and several long-time associates and Robert.

The current Eberbach Corporation on Maple Rd. left the downtown area in the 1950s.  That corporation maintains the manufacturing "function" of the business, Eberbach explained.

The retail drug "function" was sold to Jack Austin in the late 1960s, he continued and now is known as the Drug Shoppe at Lamp Post Plaza.

Since then, the only occupant was the Democratic Party which had its 1972 Washtenaw County campaign headquarters on the ground floor of the building.

The Democratic Party was one of two non-family pursuits to use the building.  The other was the Christian Science Reading Room which was located on the ground floor in the late 1930s.

Wrecker's Ball Is In Future Of Eberbach Building