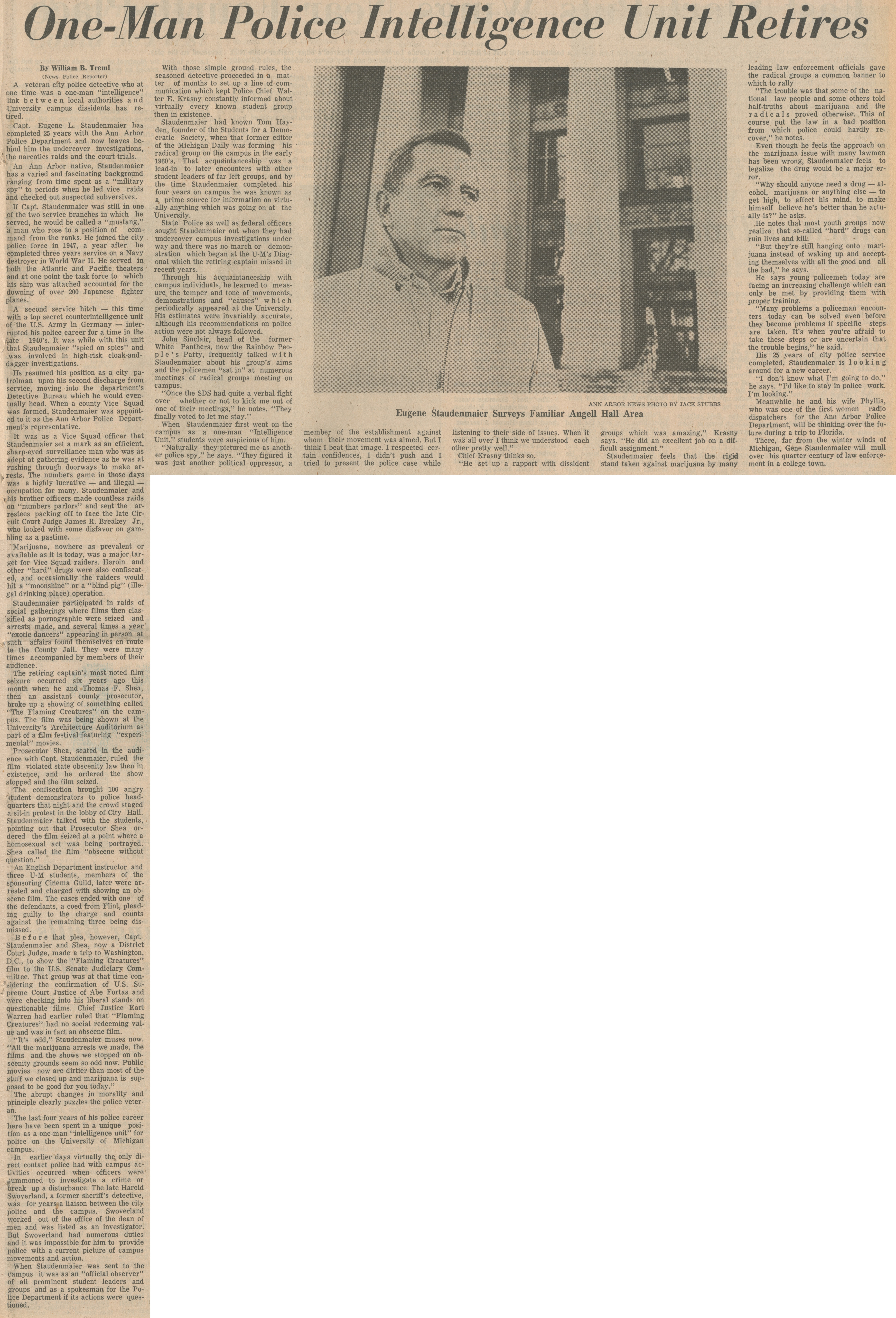 A veteran city police detective who at one time was a one-man “intelligence” link between local authorities and University campus dissidents has retired.

Capt. Eugene L. Staudenmaier has completed 25 years with the Ann Arbor Police Department and now leaves behind him the undercover investigations, the narcotics raids and the court trials.

An Ann Arbor native, Staudenmaier has a varied and fascinating background ranging from time spent as a “military spy” to periods when he led vice raids and checked out suspected subversives.

If Capt. Staudenmaier was still in one of the two service branches in which he served, he would be called a “mustang,” a man who rose to a position of command from the ranks. He joined the city police force in 1947, a year after he completed three years service on a Navy destroyer in World War II. He served in both the Atlantic and Pacific theaters and at one point the task force to which his ship was attached accounted for the downing of over 200 Japanese fighter planes.

A second service hitch — this time with a top secret counterintelligence unit of the U.S. Army in Germany — interrupted his police career for a time in the |ate 1940’s. It was while with this unit that Staudenmaier “spied on spies” and was involved in high-risk cloak-and-dagger investigations.

Hs resumed his position as a city patrolman upon his second discharge from service, moving into the department’s Detective Bureau which he would eventually head. When a county Vice Squad was formed, Staudenmaier was appointed to it as the Ann Arbor Police Department’s representative.

It was as a Vice Squad officer that Staudenmaier set a mark as an efficient, sharp-eyed surveillance man who was as adept at gathering evidence as he was at rushing through doorways to make arrests. The numbers game in those days was a highly lucrative — and illegal — occupation for many. Staudenmaier and this brother officers made countless raids on “numbers parlors” and sent the arrestees packing off to face the late Circuit Court Judge James R. Breakey Jr., who looked with some disfavor on gambling as a pastime.

Marijuana, nowhere as prevalent or available as it is today, was a major target for Vice Squad raiders. Heroin and other “hard” drugs were also confiscated, and occasionally the raiders would hit a "moonshine” or a “blind pig” (illegal drinking place) operation.

Staudenmaier participated in raids of social gatherings where films then classified as pornographic were seized and arrests made, and several times a year “exotic dancers” appearing in person at such affairs found themselves en route to the County Jail. They were many times accompanied by members of their audience.

The retiring captain’s most noted film seizure occurred six years ago this month when he and Thomas F. Shea, then an assistant county prosecutor, broke up a showing of something called “The Flaming Creatures” on the campus. The film was being shown at the University’s Architecture Auditorium as part of a film festival featuring “experimental” movies.

Prosecutor Shea, seated in the audience with Capt. Staudenmaier, ruled the film violated state obscenity law then in existence, and he ordered the show stopped and the film seized.

The confiscation brought 100 angry student demonstrators to police headquarters that night and the crowd staged a sit-in protest in the lobby of City Hall. Staudenmaier talked with the students, pointing out that Prosecutor Shea ordered the film seized at a point where a homosexual act was being portrayed. Shea called the film "obscene without question.”

An English Department instructor and three U-M students, members of the sponsoring Cinema Guild, later were arrested and charged with showing an obscene film. The cases ended with one of the defendants, a coed from Flint, pleading guilty to the charge and counts against the remaining three being dismissed.

Before that plea, however, Capt. Staudenmaier and Shea, now a District Court Judge, made a trip to Washington, D.C., to show the “Flaming Creatures” film to the U.S. Senate Judiciary Committee. That group was at that time considering the confirmation of U.S. Supreme Court Justice of Abe Fortas and were checking into his liberal stands on questionable films. Chief Justice Earl Warren had earlier ruled that "Flaming Creatures” had no social redeeming value and was in fact an obscene film.

“It’s odd,” Staudenmaier muses now. “All the marijuana arrests we made, the films and the shows we stopped on obscenity grounds seem so odd now. Public movies now are dirtier than most of the stuff we closed up and marijuana is supposed to be good for you today.”

The abrupt changes in morality and principle clearly puzzles the police veteran.

The last four years of his police career here have been spent in a unique position as a one-man “intelligence unit” for police on the University of Michigan campus.

In earlier days virtually the only direct contact police had with campus activities occurred when officers were summoned to investigate a crime or break up a disturbance. The late Harold Swoverland, a former sheriff’s detective, was for years a liaison between the city police and the campus. Swoverland worked out of the office of the dean of men and was listed as an investigator. But Swoverland had numerous duties and it was impossible for him to provide police with a current picture of campus movements and action.

When Staudenmaier was sent to the campus it was as an “official observer” of all prominent student leaders and groups and as a spokesman for the Police Department if its actions were questioned.

With those simple ground rules, the seasoned detective proceeded in a matter of months to set up a line of communication which kept Police Chief Walter E. Krasny constantly informed about virtually every known student group then in existence.

Staudenmaier had known Tom Hayden, founder of the Students for a Democratic Society, when that former editor of the Michigan Daily was forming his radical group on the campus in the early 1960’s. That acquaintanceship was a lead-in to later encounters with other student leaders of far left groups, and by the time Staudenmaier completed his four years on campus he was known as a prime source for information on virtually anything which was going on at the University.

State Police as well as federal officers sought Staudenmaier out when they had undercover campus investigations under way and there was no march or demonstration which began at the U-M’s Diagonal which the retiring captain missed in recent years.

Through his acquaintanceship with campus individuals, he learned to measure the temper and tone of movements, demonstrations and “causes” which periodically appeared at the University. His estimates were invariably accurate, although his recommendations on police action were not always followed.

John Sinclair, head of the former White Panthers, now the Rainbow People’s Party, frequently talked with Staudenmaier about his group’s aims and the policemen “sat in” at numerous meetings of radical groups meeting on campus.

“Once the SDS had quite a verbal fight over whether or not to kick me out of one of their meetings,” he notes. “They finally voted to let me stay.”

When Staudenmaier first went on the campus as a one-man “Intelligence Unit,” students were suspicious of him.

"Naturally they pictured me as another police spy,” he says. “They figured it was just another political oppressor, a

member of the establishment against whom their movement was aimed. But I think I beat that image. I respected certain confidences, I didn't push and I tried to present the police case while

listening to their side of issues. When it was all over I think we understood each other pretty well.”

“He set up a rapport with dissident

groups which was amazing,” Krasny says. “He did an excellent job on a difficult assignment.”

Staudenmaier feels that the rigid stand taken against marijuana by many

leading law enforcement officials gave the radical groups a common banner to which to rally.

“The trouble was that some of the national law people and some others told half-truths about marijuana and the radicals proved otherwise. This of course put the law in a bad position from which police could hardly recover,” he notes.

Even though he feels the approach on the marijuana issue with many lawmen has been wrong, Staudenmaier feels to legalize the drug would be a major error.

“Why should anyone need a drug — alcohol, marijuana or anything else — to get high, to affect his mind, to make himself believe he’s better than he actually is?” he asks.

He notes that most youth groups now realize that so-called “hard” drugs can ruin lives and kill.

“But they’re still hanging onto marijuana instead of waking up and accepting themselves with all the good and all the bad,” he says.

He says young policemen today are facing an increasing challenge which can only be met by providing them with proper training.

“Many problems a policeman encounters today can be solved even before they become problems if specific steps are taken. It’s when you’re afraid to take these steps or are uncertain that the trouble begins,” he said.

His 25 years of city police service completed, Staudenmaier is looking around for a new career.

Meanwhile he and his wife Phyllis, who was one of the first women radio dispatchers for the Ann Arbor Police Department, will be thinking over the future during a trip to Florida.

There, far from the winter winds of Michigan, Gene Staudenmaier will mull over his quarter century of law enforcement in a college town.