They're Drifting Back From Cloud 9 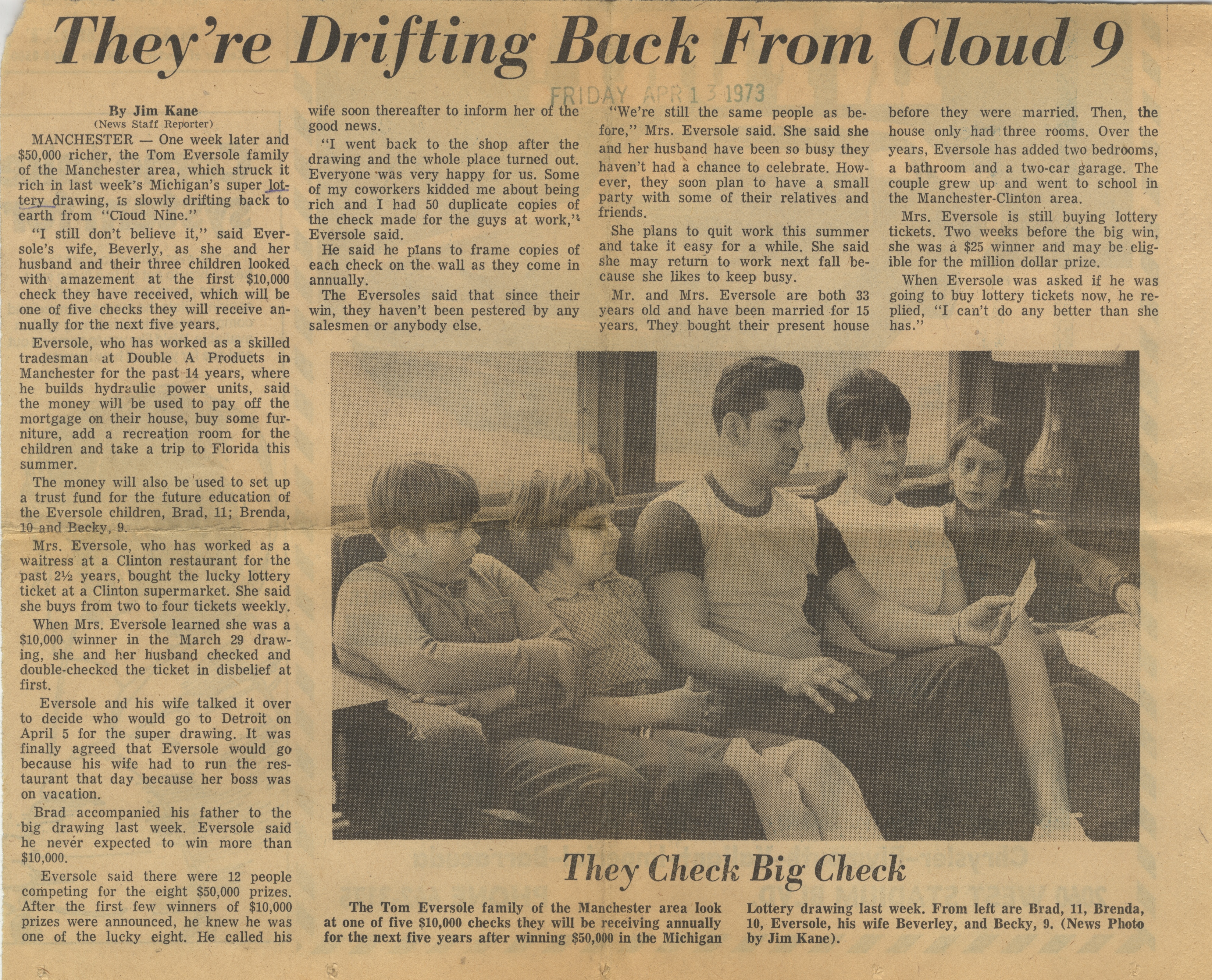 ﻿They’re Drifting Back From Cloud 9<br><br>By Jim Kane<br><br>MANCHESTER — One week later and $50,000 richer, the Tom Eversole family of the Manchester area, which struck it rich in last week’s Michigan’s super Jet tery_drawing, is slowly drifting back to earth from "Cloud Nine.”<br><br>“I still don’t believe it,” said Ever-sole’s wife, Beverly, as she and her husband and their three children looked with amazement at the first $10,000 check they have received, which will be one of five checks they will receive annually for the next five years.<br><br>Eversole, who has worked as a skilled tradesman at Double A Products in Manchester for the past 14 years, where he builds hydraulic power units, said the money will be used to pay off the mortgage on their house, buy some furniture, add a recreation room for the children and take a trip to Florida this summer.<br><br>The money will also be used to set up a trust fund for the future education of the Eversole children, Brad, 11; Brenda, 10 and Becky, 9. ----<br><br>Mrs. Eversole, who has worked as a waitress at a Clinton restaurant for the past 2Vi years, bought the lucky lottery ticket at a Clinton supermarket. She said she buys from two to four tickets weekly.<br><br>When Mrs. Eversole learned she was a $10,000 winner in the March 29 drawing, she and her husband checked and double-checked the ticket in disbelief at first.<br><br>Eversole and his wife talked it over to decide who would go to Detroit on April 5 for the super drawing. It was finally agreed that Eversole would go because his wife had to run the restaurant that day because her boss was on vacation.<br><br>wife soon thereafter to inform her of the good news.<br><br>"I went back to the shop after the drawing and the whole place turned out. Everyone -was very happy for us. Some of my coworkers kidded me about being rich and I had 50 duplicate copies of the check made for the guys at work,’1 Eversole said.<br><br>He said he plans to frame copies of each check on the wall as they come in annually.<br><br>The Eversoles said that since their win, they haven’t been pestered by any salesmen or anybody else.<br><br>“We’re still the same people as before,” Mrs. Eversole said. She said she and her husband have been so busy they haven’t had a chance to celebrate. However, they soon plan to have a small party with some of their relatives and friends.<br><br>She plans to quit work this summer and take it easy for a while. She said she may return to work next fall because she likes to keep busy.<br><br>Mr. and Mrs. Eversole are both 33 years old and have been married for 15 years. They bought their present house<br><br>before they were married. Then, the house only had three rooms. Over the years, Eversole has added two bedrooms, a bathroom and a two-car garage. The couple grew up and went to school in the Manchester-Clinton area.<br><br>Mrs. Eversole is still buying lottery tickets. Two weeks before the big win, she was a $25 winner and may be eligible for the million dollar prize.<br><br>When Eversole was asked if he was going to buy lottery tickets now, he replied, “I can’t do any better than she has.”<br><br>Brad accompanied his father to the big drawing last week. Eversole said he never expected to win more than $10,000.<br><br>Eversole said there were 12 people competing for the eight $50,000 prizes. After the first few winners of $10,000 prizes were announced, he knew he was one of the lucky eight. He called his<br><br>They Check Big Check<br><br>The Tom Eversole family of the Manchester area look Lottery drawing last week. From left are Brad, 11, Brenda,<br><br>at one of five $10,000 checks they will be receiving annually 10, Eversole, his wife Beverley, and Becky, 9. (News Photo<br><br>for the next five years after winning $50,000 in the Michigan by Jim Kane).