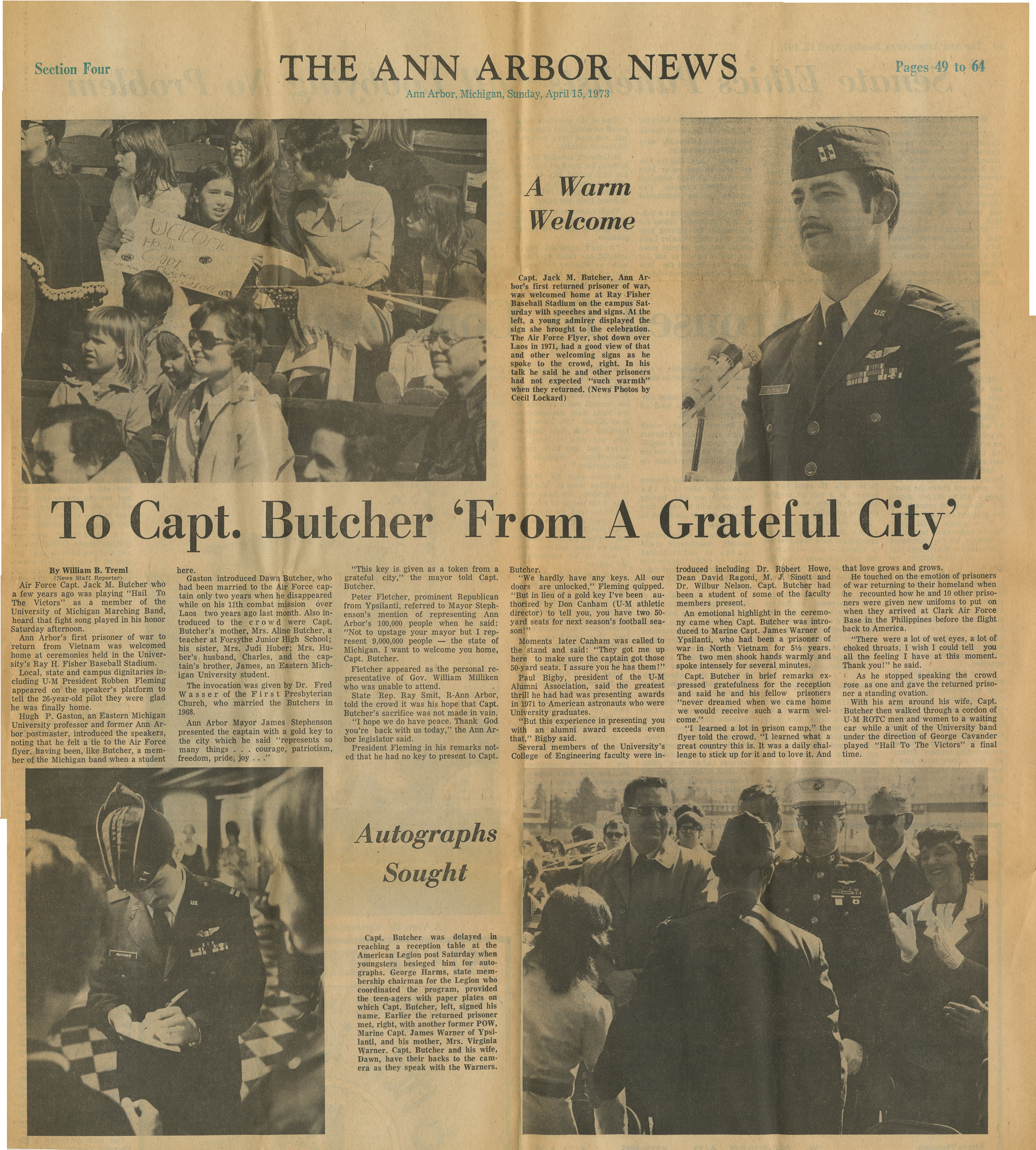 Air Force Capt. Jack M. Butcher who a few years ago was playing "Hail To The Victors" as a member of the University of Michigan Marching Band, heard that fight song played in his honor Saturday afternoon.

Local, state and campus dignitaries including U-M President Robben Fleming appeared on the speaker's platform to tell the 26-year-old pilot they were glad he was finally home.

Hugh P. Gaston, an Eastern Michigan University professor and former Ann Arbor postmaster, introduced the speakers, noting that he felt a tie to the Air Force flier, having been, like Butcher, a member of the Michigan band when a student here.

Gaston introduced Dawn Butcher, who had been married to the Air Force Captain only two years when he disappeared while on his 11th combat mission over Laos two years ago last month. Also introduced to the crowd were Capt. Butcher's mother, Mrs. Aline Butcher, a teacher at Forsythe Junior High School; his sister, Mrs. Judi Huber; Mrs. Huber's husband, Charles, and the captain's brother, James, an Eastern Michigan University student.

The invocation was given by Dr. Fred Wasser of the First Presbyterian Church, who married the Butchers in 1968.

Ann Arbor Mayor James Stephenson presented the captain with a gold key to the city which he said "represents so many things...courage, patriotism, freedom, pride, joy..."

"This key is given as a token from a grateful city," the mayor told Capt. Butcher.

Peter Fletcher, prominent Republican from Ypsilanti, referred to Mayor Stephenson's mention of representing Ann Arbor's 100,000 people when he said: "Not to upstage your mayor but I represent 9,000,000 -- the state of Michigan. I want to welcome you home, Capt. Butcher.

Fletcher appeared as the personal representative of Gov. William Milliken who was unable to attend.

State Rep. Ray Smit, R-Ann Arbor, told the crowd it was his hope that Capt. Butcher's sacrifice was not made in vain.

"I hope we do have peace. Thank God you're back with us today," the Ann Arbor legislator said.

President Fleming in his remarks noted that he had no key to present to Capt. Butcher.

"We hardly have any keys. All our doors are unlocked," Fleming quipped. "But in lieu of a gold key I've been authorized by Don Canham(U-M athletic director) to tell you, you have two 50-yard seats for next season's football season!"

Moments later Canham was called to the stand and said: "They got me up here to make sure the captain got those 50-yard seats. I assure you he has them!"

Paul Bigby, president of the U-M Alumni Association, said the greatest thrill he had had was presenting awards in 1971 to American astronauts who were University graduates.

"But this experience in presenting you with an alumni award exceeds even that," Bigby said.

Several members of the University's College of Engineering faculty were introduced including Dr. Robert Howe, Dean David Ragoni, M. J. Sinott and Dr. Wilbur Nelson. Capt. Butcher had been a student of some of the faculty members present.

An emotional highlight in the ceremony came when Capt. Butcher was introduced to Marine Capt. James Warner of Ypsilanti, who had been a prisoner of war in North Vietnam for 5 1/2 years. The two men shook hands warmly and spoke intensely for several minutes.

Capt. Butcher in brief remarks expressed gratefulness for the reception and said he and his fellow prisoners "never dreamed when we came home we would receive such a warm welcome."

"I learned a lot in prison camp," the flyer told the crowd. "I learned what a great country this is. It was a daily challenge to stick up for it and to love it. And that love grows and grows.

He touched on the emotion of prisoners of war returning to their homeland when he recounted how he and 10 other prisoners were given new uniforms to put on when they arrived at Clark Air Force Base in the Philippines before the flight back to America.

"There were a lot of wet eyes, a lot of choked throats. I wish I could tell you all the feeling I have at this moment. Thank you!" he said.

As he stopped speaking the crowd rose as one and gave the returned prisoner a standing ovation.

With his arm around his wife, Capt, Butcher then walked through a cordon of U-M ROTC men and women to a waiting car while a unit of the University band under the direction of George Cavander played "Hail To The Victors" a final time.

Capt. Jack M. Butcher, Ann Arbor's first returned prisoner of war, was welcomed home at Ray Fisher Baseball Stadium on the campus Saturday with speeches and signs. At the left, a young admirer displayed the sign she brought to the celebration. The Air Force Flyer, shot down over Laos in 1971, had a good view of that and other welcoming signs as he spoke to the crowd, right. In his talk he said he and other prisoners had not expected "such warmth" when they returned. (News Photos by Cecil Lockard)

Capt. Butcher was delayed in reaching a reception table at the American Legion post Saturday when youngsters besieged him for autographs. George Harms, state membership chairman for the Legion who coordinated the program, provided the teen-agers with paper plates on which Capt. Butcher, left, signed his name. Earlier the returned prisoner met, right, with another former POW, Marine Capt. James Warner of Ypsilanti, and his mother, Mrs. Virginia Warner. Capt. Butcher and his wife, Dawn, have their backs to the camera as they speak with the Warners.