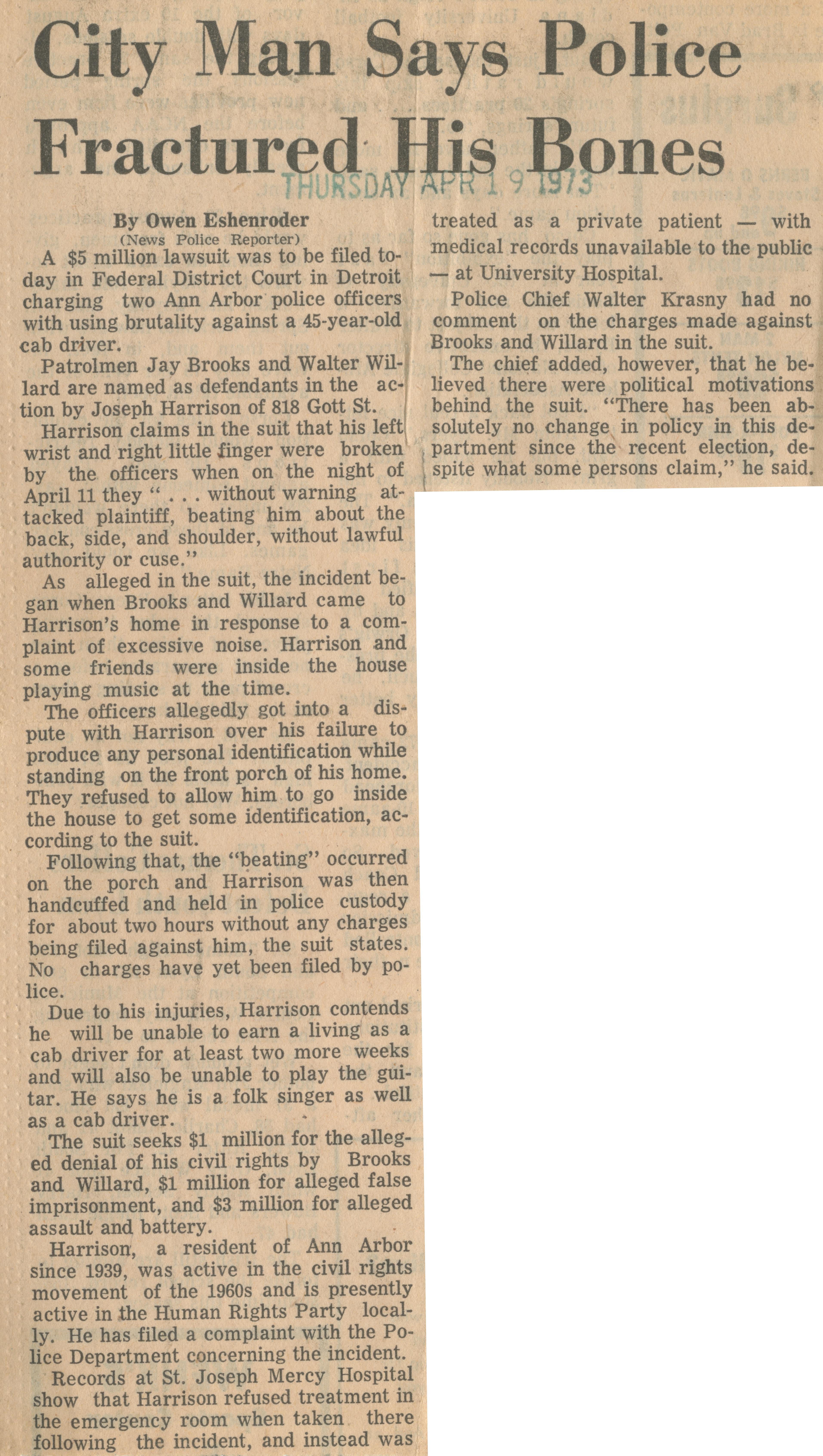 A $5 million lawsuit was to be filed today in Federal District Court in Detroit charging two Ann Arbor pólice officers with using brutality against a 45-year-old cab driver. Patrolmen Jay Brooks and Walter Wülard are named as defendants in the action by Joseph Harrison of 818 Gott St. , Harrison claims in the suit that his left wrist and right litüe finger were broken by the officers when on the night of April 11 they "... without warning attacked plaintiff, beating him about the back, side, and shoulder, without lawful authoritv or cuse." As alleged in the suit, the incident began when Brooks and Willard carne to Harrison's home in response to a complaint of excessive noise. Harrison and some f riends were inside the house playing music at the time. The officers allegedly got into a dispute with Harrison over his failure to produce any personal identification while standing on the front porch of his home. I They refused to allow him to go jnside_ the house to get some identification, according to the suit. Following that, the "beating" occurred on the porch and Harrison was then handcuffed and held in pólice custody for about two hours without any charges being filed against him, the suit states.l No charges have yet been filed by 1 lice. Due to his injuries, Harrison contends j he will be unable to earn a living as a i cab driver for at least two more weeks and will also be unable to play the guitar. He says he is a folk singer as well as a cab driver. The suit seeks $1 million for the alleged denial of his civil rights by Brooks and Willard, $1 million for alleged false imprisonment, and $3 million for alleged assault and battery. Harrison, a resident of Ann Arbor since 1939, was active in the civil rights movement of the 1960s and is presently active in the Human Rights Party jjüëcUompIainrotn the ■ lice Department concerning the incident. I Records at St. Joseph Mercy Hospital ■ show that Harrison refused treatment in I the emergency room when taken there I following the incident, and instead was I 'tr'eatedXas'á pritfate patiënt - with 1 medical records unavailable to the public I - at University Hospital. Pólice Chief Walter Krasny had no I comment on the charges made agamst I Brooks and Willard in the suit. I The chief added, however, that he 1 lieved there were political motivations I behind the suit. "There has been ab-l solutely no change in policy m this de- partment since the recent election, de- spite what some personsclaimaioj