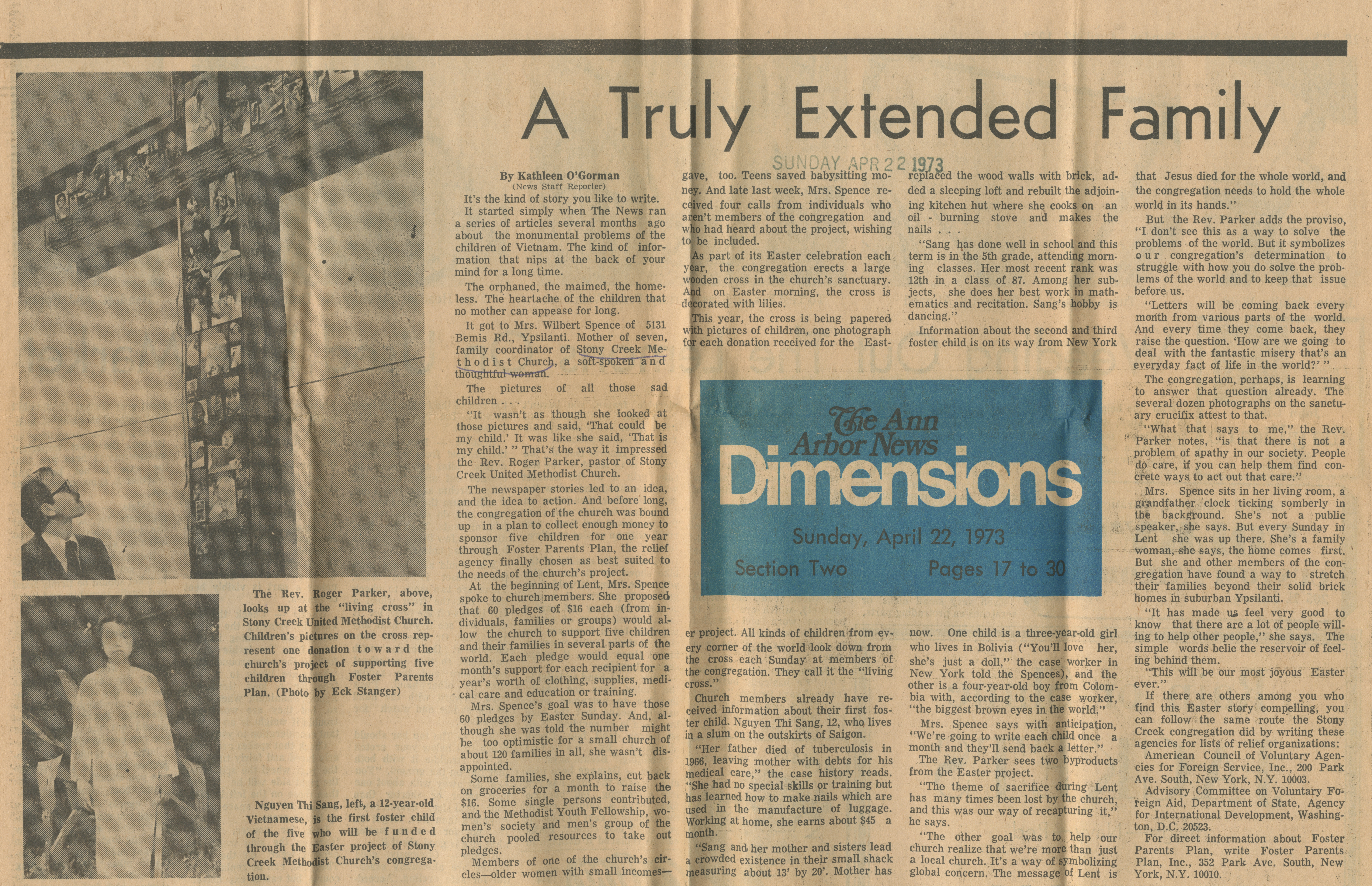 ﻿The Rev. Roger Parker, above, looks up at the “living cross” in Stony Creek United Methodist Church. Children’s pictures on the cross represent one donation toward the church’s project of supporting five children through Foster Parents Plan. (Photo by Eck Stanger)

Nguyen Thi Sang, left, a 12-year-old Vietnamese, is the first foster child of the five who will he funded through the Easter project of Stony Creek Methodist Church’s congregation.

It’s the kind of story you like to write.

It started simply when The News ran a series of articles several months ago about the monumental problems of the children of Vietnam. The kind of information that nips at the back of your mind for a long time.

The orphaned, the maimed, the homeless. The heartache of the children that no mother can appease for long.

It got to Mrs. Wilbert Spence of 5131 Bemis Rd., Ypsilanti. Mother of seven, family coordinator of Stony Creek Methodist Church, a soft-spoken, and thoughtful woman.

The pictures of all those sad children . . .

“It wasn’t as though she looked at those pictures and said, ‘That could be my child.’ It was like she said, ‘That is my child.’ ” That’s the way it impressed the Rev. Roger Parker, pastor of Stony Creek United Methodist Church.

The newspaper stories led to an idea, and the idea to action. And before long, the congregation of the church was bound up in a plan to collect enough money to sponsor five children for one year through Foster Parents Plan, the relief agency finally chosen as best suited to the needs of the church’s project.

At the beginning of Lent, Mrs. Spence spoke to church members. She proposed that 60 pledges of $16 each (from individuals, families or groups) would allow the church to support five children and their families in several parts of the world. Each pledge would equal one month’s support for each recipient for a year’s worth of clothing, supplies, medical care and education or training.

Mrs. Spence’s goal was to have those 60 pledges by Easter Sunday. And, although she was told the number might be too optimistic for a small church of about 120 families in all, she wasn’t disappointed.

Some families, she explains, cut back on groceries for a month to raise the $16. Some single persons contributed, and the Methodist Youth Fellowship, women’s society and men’s group of the church pooled resources to take out pledges.

Members of one of the church’s circles—older women with small incomes—gave, too. Teens saved babysitting money. And late last week, Mrs. Spence received four calls from individuals who aren’t members of the congregation and who had heard about the project, wishing to be included.

As part of its Easter celebration each year, the congregation erects a large wooden cross in the church’s sanctuary. And on Easter morning, the cross is decorated with lilies.

This year, the cross is being papered with pictures of children, one photograph for each donation received for the Easter project. All kinds of children from every corner of the world look down from the cross each Sunday at members of the congregation. They call it the “living cross.”

Church members already have received information about their first foster child. Nguyen Thi Sang, 12, who, lives in a slum on the outskirts of Saigon.

“Her father died of tuberculosis in 1966, leaving mother with debts for his medical care,” the case history reads. “She had no special skills or training but has learned how to make nails which are used in the manufacture of luggage. Working at home, she earns about $45 a month.

“Sang and, her mother and sisters lead a crowded existence in their small shack measuring about 13’ by 20’. Mother has replaced the wood walls with brick, added a sleeping loft and rebuilt the adjoining kitchen hut where she cooks on an oil - burning stove and makes the nails . . .

“Sang has done well in school and this term is in the 5th grade, attending morning classes. Her most recent rank was 12th in a class of 87. Among her subjects, she does her best work in mathematics and recitation. Sang’s hobby is dancing.”

Information about the second and third foster child is on its way from New York now. One child is a three-year-old girl who lives in Bolivia (“You’ll love her, she’s just a doll,” the case worker in New York told the Spences), and the other is a four-year-old boy from Colombia with, according to the case worker, “the biggest brown eyes in the world.” Mrs. Spence says with anticipation, “We’re going to write each child once a month and they’ll send back a letter.” The Rev. Parker sees two byproducts from the Easter project.

“The theme of sacrifice during Lent has many times been lost by the church, and this was our way of recapturing it,” he says.

“The other goal was to help our church realize that we’re more than just a local church. It’s a way of symbolizing global concern. The message-'of Lent is

“Letters will be coming back every month from various parts of the world. And every time they come back, they raise the question. ‘How are we going to deal with the fantastic misery that’s an everyday fact of life in the world?’ ”

The congregation, perhaps, is learning to answer that question already. The several dozen photographs on the sanctuary crucifix attest to that.

“What that says to me,” the Rev. Parker notes, “is that there is not a problem of apathy in our society. People do care, if you can help them find concrete ways to act out that care.”

Mrs. Spence sits in her living room, a grandfather clock ticking somberly in the background. She’s not a public speaker, she says. But every Sunday in Lent she was up there. She’s a family woman, she says, the home comes first. ' But she and other members of the congregation have found a way to stretch their families beyond their solid brick homes in suburban Ypsilanti.

“It has made us feel very good to know that there are a lot of people willing to help other people,” she says. The simple words belie the reservoir of feeling behind them.

“This will be our most joyous Easter ever.”

If there are others among you who find this Easter story compelling, you can follow the same route the Stony Creek congregation did by writing these agencies for lists of relief organizations: American Council of Voluntary Agencies for Foreign Service, Inc., 200 Park Ave. South, New York, N.Y. 10003.