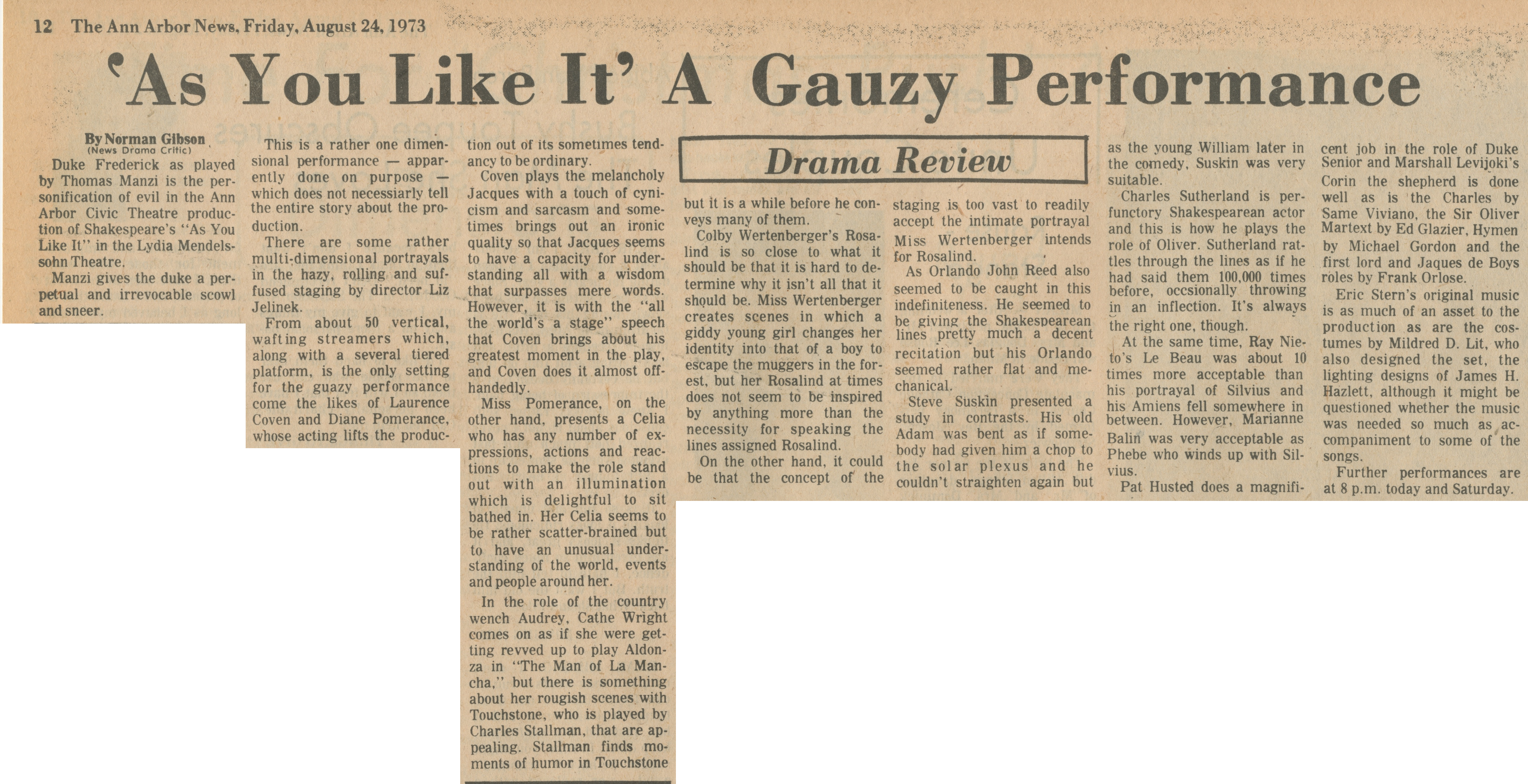 Duke Frederick as played by Thomas Manzi is the personification of evil in the Ann Arbor Civic Theatre production of Shakespeare's “As You Like It" in the Lydia Mendelssohn Theatre.

Manzi gives the duke a perpetual and irrevocable scowl and sneer.

This is a rather one dimensional performance — apparently done on purpose — which does not necessarily tell the entire story about the production.

There are some rather multidimensional portrayals in the hazy, rolling and suffused staging by director Liz Jelinek.

From about 50 vertical, wafting streamers which, along with a several tiered platform, is the only setting for the guazy performance come the likes of Laurence Coven and Diane Pomerance, whose acting lifts the production out of its sometimes tend-ancy to be ordinary.

Coven plays the melancholy Jacques with a touch of cynicism and sarcasm and sometimes brings out an ironic quality so that Jacques seems to have a capacity for understanding all with a wisdom that surpasses mere words. However, it is with the “all the world’s a stage” speech that Coven brings about his greatest moment in the play, and Coven does it almost offhandedly.

Miss Pomerance, on the other hand, presents a Celia who has any number of expressions. actions and reactions to make the role stand out with an illumination which is delightful to sit bathed in. Her Celia seems to be rather scatter-brained but to have an unusual understanding of the world, events and people around her.

In the role of the country wench Audrey, Cathe Wright comes on as if she were getting revved up to play Aldonza in ‘The Man of La Mancha.” but there is something about her rougish scenes with Touchstone, who is played by Charles Stallman, that are appealing. Stallman finds moments of humor in Touchstone but it is a while before he conveys many of them.

Colby Wertenberger's Rosalind is so close to what it should be that it is hard to determine why it isn’t all that it should be. Miss Wertenberger creates scenes in which a giddy young girl changes her identity into that of a boy to escape the muggers in the forest. but her Rosalind at times does not seem to be inspired by anything more than the necessity for speaking the lines assigned Rosalind.

On the other hand, it could be that the concept of the staging is too vast to readily accept the intimate portrayal Miss Wertenberger intends for Rosalind.

As Orlando John Reed also seemed to be caught in this indefiniteness. He seemed to be giving the Shakespearean lines pretty much a decent recitation but his Orlando seemed rather flat and mechanical.

Steve Suskin presented a study in contrasts. His old Adam was bent as if somebody had given him a chop to the solar plexus and he couldn't straighten again but as the young William later in the comedy, Suskin was very suitable.

Charles Sutherland is perfunctory Shakespearean actor and this is how he plays the role of Oliver. Sutherland rattles through the lines as if he had said them 100,000 times before, occasionally throwing in an inflection. It's always the right one though.

At the same time, Ray Nieto's Le Beau was about 10 times more acceptable than his portrayal of Silvius and his Amiens fell somewhere in between. However, Marianne Balin was very acceptable as Phebe who winds up with Silvius.

Pat Husted does a magnificent job in the role of Duke Senior and Marshall Levijoki's Corin the shepherd is done well as is the Charles by Same Viviano, the Sir Oliver Martext by Ed Glazier, Hymen by Michael Gordon and the first lord and Jaques de Boys roles by Frank Orlose.

Eric Stern's original music is as much of an asset to the production as are the costumes by Mildred D. Lit, who also designed the set, the lighting designs of James H. Hazlett, although it might be questioned whether the music was needed so much as accompaniment to some of the songs.

Further performances are at 8 p.m. today and Saturday.