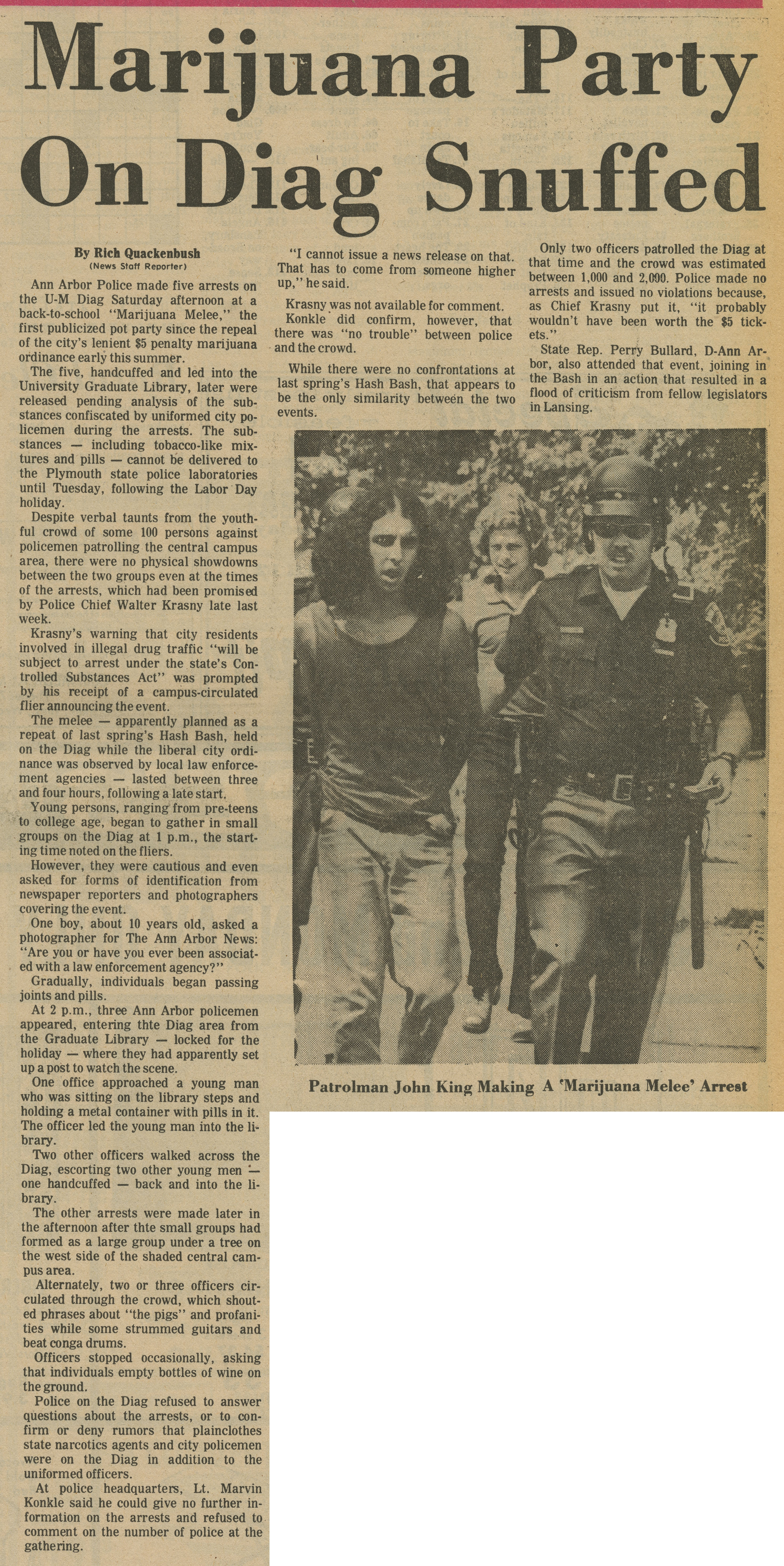 Ann Arbor Police made five arrests on the U-M Diag Saturday afternoon at a back-to-school "Marijuana Melee," the first publicized pot party since the repeal of the city's lenient $5 penalty marijuana ordinance early this summer. The five, handcuffed and led into the University Graduate Library, later were released pending analysis of the substances confiscated by uniformed city policemen during the arrests. The substances - including tobacco-like mixtures and pills - cannot be delivered to the Plymouth state police laboratories until Tuesday, following the Labor Day holiday. Despite verbal taunts from the youthful crowd of some 100 persons against policemen patrolling the central campus area, there were no physical showdowns between the two groups even at the times of the arrests, which had been promised by Police Chief Walter Krasny late last week. Krasny's warning that city residents in volved in illegal drug traffic "will be subject to arrest under the state's Controlled Substances Act" was prompted by his receipt of a campus-circulated flier announcing the event. The melee - apparently planned as a repeat of last spring's Hash Bash, held on the Diag while the liberal city ordinance was observed by local law enforcement - lasted between three and four hours, following a late start. Young persons, ranging from pre-teens to college age, began to gather in small groups on the Diag at 1 p.m., the starting time noted on the fliers. However, they were cautious and even asked for forms of identification from newspaper reporters and photographers covering the event. One boy, about 10 years old, asked a photographer for The Ann Arbor News:, "Are you or have you ever been associated with a law enforcement agency?" Gradually, individuals began passing joints and pills. At 2 p.m., three Ann Arbor policemen appeared, entering thte Diag area from the Graduate Library - locked for the holiday - where they had apparently set up a post to watch the scene. One office approached a young man who was sitting on the library steps and holding a metal container with pills in it. The officer led the young man into the library. Two other officers walked across the Diag, escorting two other young men - one handcuffed - back and into the library. The other arrests were made later in the afternoon after the small groups had formed as a large group under a tree on the west side of the shaded central campus area. Alternately, two or three officers circulated through the crowd, which shouted phrases about "the pigs" and profanities while some strummed guitars and beat conga drums. Officers stopped occasionally, asking that individuals empty bottles of wine on the ground. Police on the Diag refused to answer questions about the arrests, or to confirm or deny rumors that plainclothes state narcotics agents and city policemen were on the Diag in addition to the uniformed officers. At police headquarters, Lt. Marvin Konkle said he could give no further information on the arrests and refused to comment on the number of police at the gathering. "'I cannot issue a news release on that. That has to come from someone higher up,"he said. Krasny was not available for comment. Konkle did confirm, however, that there was "no trouble" between police and the crowd. While there were no confrontations at last spring's Hash Bash, that appears to be the only similarity between the two events. Only two officers patrolled the Diag at that time and the crowd was estimated between 1,000 and 2,000. Police made no arrests and issued no violations because, as Chief Krasny put it, "it probably wouldn't have been worth the $5 tickets." State Rep. Perry Bullard, D-Ann Arbor, also attended that event, joining in the Bash in an action that resulted in a flood of criticism from fellow legislators in Lansing.