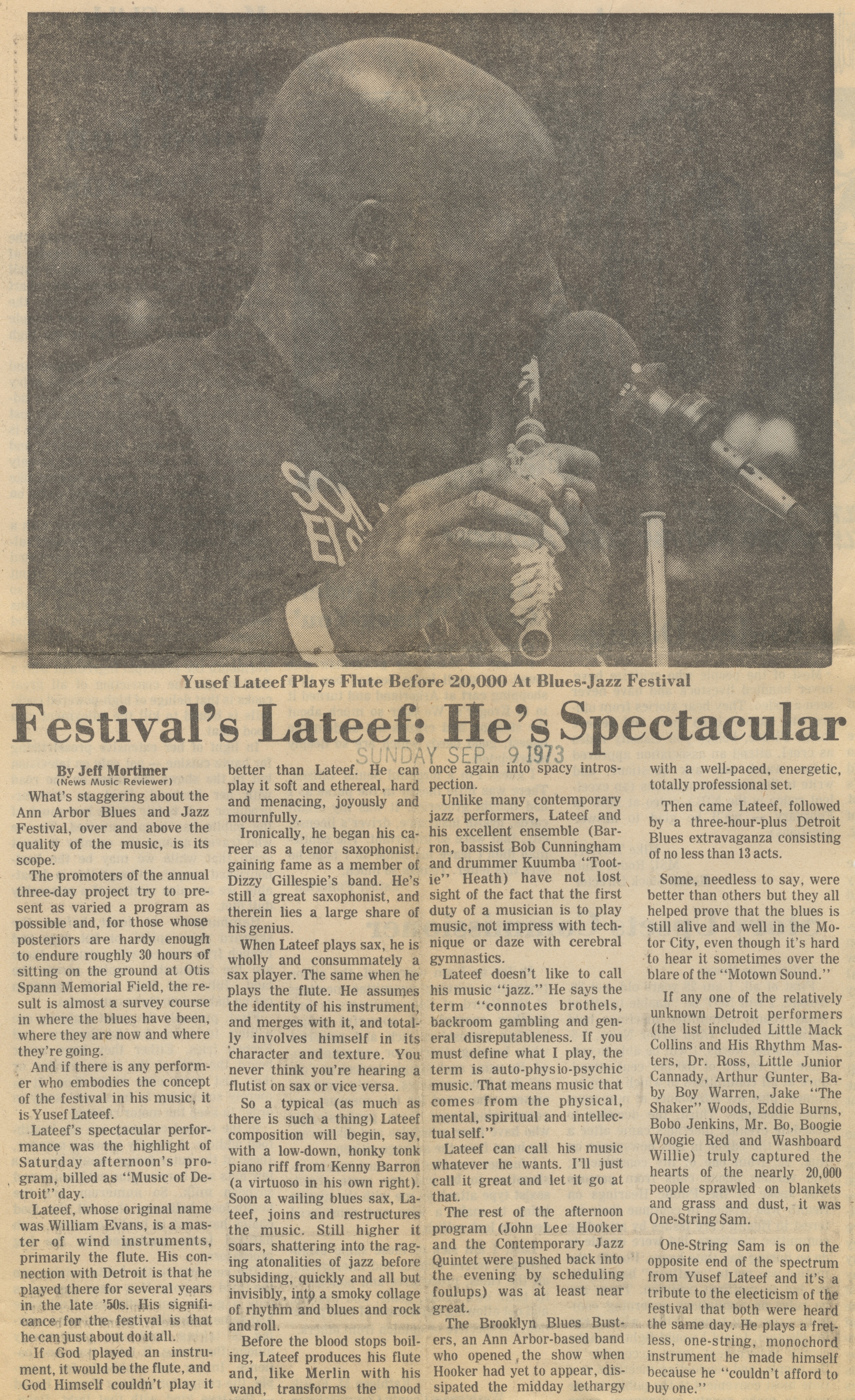 What’s staggering about the Ann Arbor Blues and Jazz Festival, over and above the quality of the music, is its scope.

The promoters of the annual three-day project try to present as varied a program as possible and, for those whose posteriors are hardy enough to endure roughly 30 hours of sitting on the ground at Otis Spann Memorial Field, the result is almost a survey course in where the blues have been, where they are now and where they’re going.

And if there is any performer who embodies the concept of the festival in his music, it is Yusef Lateef.

Lateef’s spectacular performance was the highlight of Saturday afternoon's program, billed as "Music of Detroit” day.

Lateef, whose original name was William Evans, is a master of wind instruments, primarily the flute. His connection with Detroit is that he played there for several years in the late ’50s. His significance for the festival is that he can just about do it all.

If God played an instrument, it would be the flute, and God Himself couldn’t play it better than Lateef. He can play it soft and ethereal, hard and menacing, joyously and mournfully.

Ironically, he began his career as a tenor saxophonist, gaining fame as a member of Dizzy Gillespie’s band. He's still a great saxophonist, and therein lies a large share of his genius.

When Lateef plays sax, he is wholly and consummately a sax player. The same when he plays the flute. He assumes the identity of his instrument, and merges with it, and totally involves himself in its character and texture. You never think you’re hearing a flutist on sax or vice versa.

So a typical (as much as there is such a thing) Lateef composition will begin, say, with a low-down, honky tonk piano riff from Kenny Barron (a virtuoso in his own right). Soon a wailing blues sax, Lateef, joins and restructures the music. Still higher it soars, shattering into the raging atonalities of jazz before subsiding, quickly and all but invisibly, into a smoky collage of rhythm and blues and rock and roll.

Before the blood stops boiling, Lateef produces his flute and, like Merlin with his wand, transforms the mood once again into spacy introspection.

Unlike many contemporary jazz performers, Lateef and his excellent ensemble (Barron, bassist Bob Cunningham and drummer Kuumba “Tootie” Heath) have not lost sight of the fact that the first duty of a musician is to play music, not impress with technique or daze with cerebral gymnastics.

Lateef doesn’t like to call his music "jazz." He says the term “connotes brothels, backroom gambling and general disreputableness. If you must define what I play, the term is auto-physio-psychic music. That means music that comes from the physical, mental, spiritual and intellectual self.”

Lateef can call his music whatever he wants. I'll just call it great and let it go at that.

The rest of the afternoon program (John Lee Hooker and the Contemporary Jazz Quintet were pushed back into the evening by scheduling foulups) was at least near great.

The Brooklyn Blues Busters, an Ann Arbor-based band who opened, the show when Hooker had yet to appear, dissipated the midday lethargy with a well-paced, energetic, totally professional set.

Then came Lateef, followed by a three-hour-plus Detroit Blues extravaganza consisting of no less than 13 acts.

Some, needless to say, were better than others but they all helped prove that the blues is still alive and well in the Motor City, even though it's hard to hear it sometimes over the blare of the "Motown Sound.”

One-String Sam is on the opposite end of the spectrum from Yusef Lateef and it’s a tribute to the electicism of the festival that both were heard the same day. He plays a fretless, one-string, monochord instrument he made himself because he "couldn't afford to buy one.”