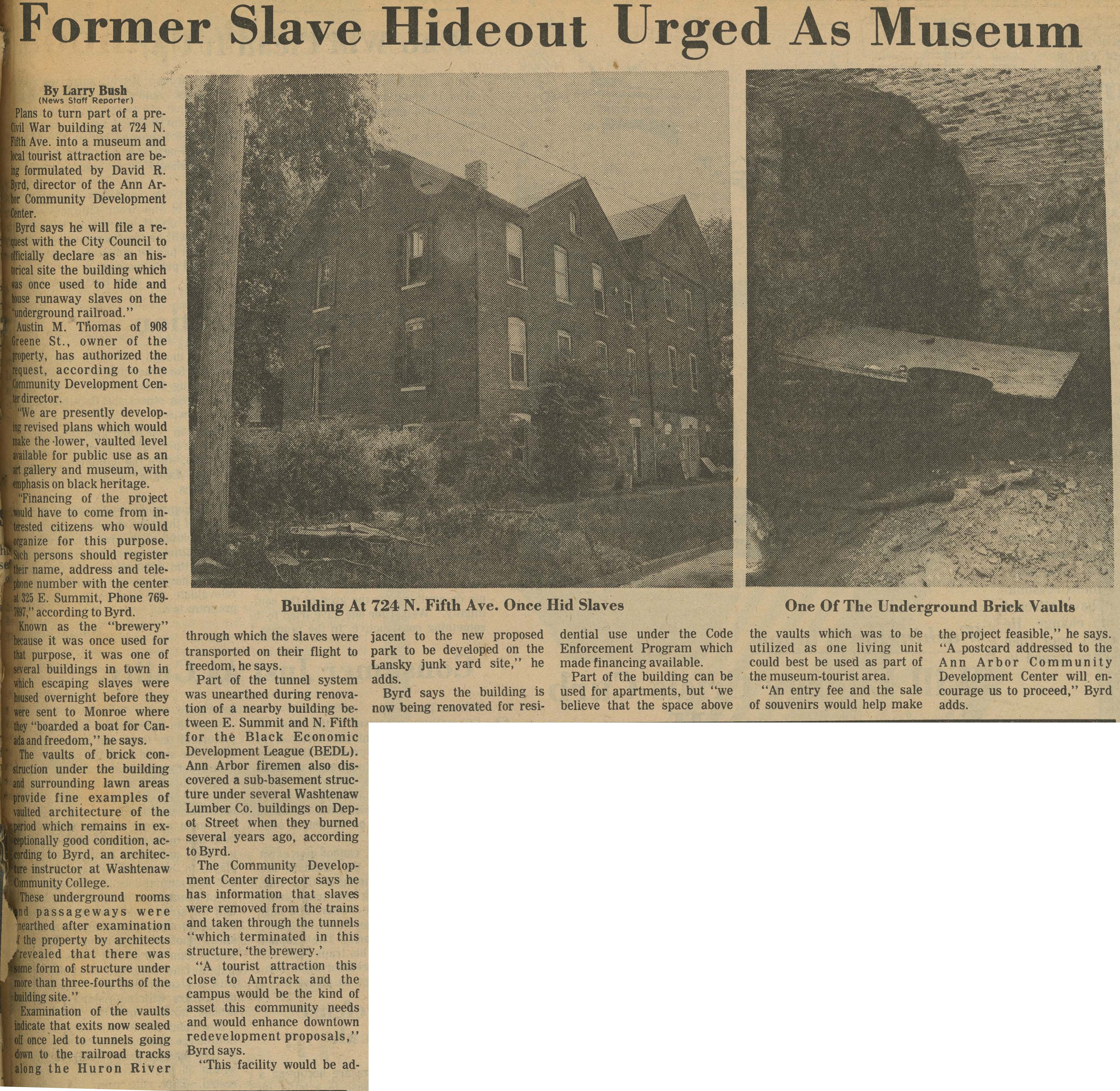 Plans to turn a pre-Civil War building at 724 N. Fifth Ave. into a museum and local tourist attraction  are being formulated by David R. Byrd, director of Ann Arbor Community Development Center.

Byrd said he will file a request with the City Council to officially declare as an historic site the building which was once used to hide and house runaway slaves on the "Underground Railroad".

Austin M. Thomas of 908 Greene St., owner of the property, as authorized the request, according to the Community Development Center director.

"We are presently developing revised plans which would make the lower, vaulted level for public use as an art gallery and museum, with emphasis on black heritage.

"Financing the project would have to come from interested citizens who would organize for this purpose. Such persons should register their name, address and telephone number with the center at 325 E. Summit, phone 769-7697," according to Byrd.

Known as "the brewery" because it was once used for that purpose, it was one of several buildings in town in which escaping slaves were housed overnight before they were sent to Monroe where they "boarded a boat for Canada and freedom," he says.

The vaults of brick construction under the building and surrounding lawn areas provide fine examples of vaulted architecture of the period which remains in exceptionally good condition, according to Byrd, an architecture instructor at Washtenaw Community College.

These underground rooms and passageways were unearthed after examination of the property by architects that "revealed that there was some form of structure under more than three-fourths of the building site."

Examination of the vaults indicated the exits which are now sealed off once led to tunnels going down to the railroad tracks along the Huron River through which the slaves were transported on their flight to freedom, he says.

Part of the tunnel system was unearthed during renovation of a nearby building between E. Summit and N. Fifth for the Black Economic Development League (BEDL). Ann Arbor firemen also discovered a sub-basement structure under several Washtenaw Lumber Co. buildings on Depot Street when they burned several years ago, according to Byrd.

The Community Development Director says he has information that slaves were removed from the  trains and taken through the tunnels "which terminated in this building, 'the brewery.'

"A tourist attraction this close to Amtrack and the campus would be the kind of asset this community needs and would enhance downtown redevelopment proposals," Byrd says.

"This facility would be adjacent to the new proposed park to be developed on the Lansky junk yard site," he adds.

Byrd says the building is now being renovated for residential use under the Code Enforcement Program which made financing available.

Part of the building can be used for apartments, but "we believe that the space above the vaults which was to be utilized as one living unit could best be used as part of the museum-tourist area.

“An entry fee and the sale of souvenirs would help make the project feasible," he says. “A postcard addressed to the Development Center will encourage us to proceed," Byrd adds.