Problems Are Yours, Administrator Says 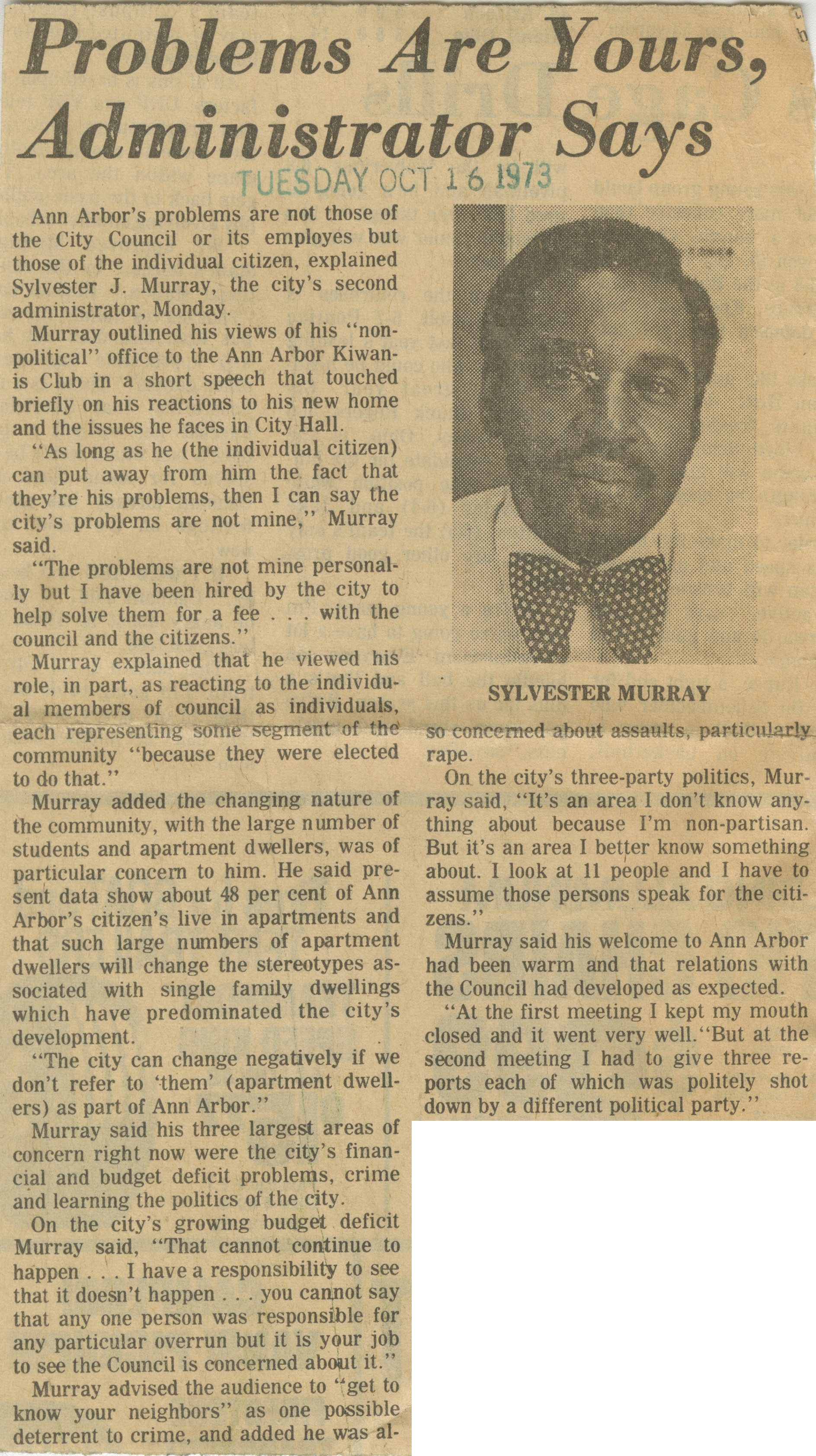 ﻿Problems Are Yours, " Administrator Says

Ann Arbor’s problems are not those of the City Council or its employes but those of the individual citizen, explained Sylvester J. Murray, the city’s second administrator, Monday.

Murray outlined his views of his “nonpolitical” office to the Ann Arbor Kiwanis Club in a short speech that touched briefly on his reactions to his new home and the issues he faces in City Hall.

“As long as he (the individual citizen) can put away from him the fact that they’re his problems, then I can say the city's problems are not mine,” Murray said.

“The problems are not mine personally but I have been hired by the city to help solve them for a fee . . . with the council and the citizens.”

Murray explained that he viewed his role, in part, as reacting to the individual members of council as individuals, each representing some segment of the community “because they were elected to do that.”

Murray added the changing nature of the community, with the large number of students and apartment dwellers, was of particular concern to him. He said present data show about 48 per cent of Ann Arbor’s citizen's live in apartments and that such large numbers of apartment dwellers will change the stereotypes associated with single family dwellings which have predominated the city’s development.

“The city can change negatively if we don’t refer to them (apartment dwellers) as part of Ann Arbor.”

Murray said his three largest areas of concern right now were the city’s financial and budget deficit problems, crime and learning the politics of the city.

On the city’s growing budget deficit Murray said, “That cannot continue to happen ... I have a responsibility to see that it doesn’t happen ... you cannot say that any one person was responsible for any particular overrun but it is your job to see the Council is concerned about it.” Murray advised the audience to “get to know your neighbors” as one possible deterrent to crime, and added he was also concerned about assaults, particularly, rape.

On the city’s three-party politics, Murray said, “It’s an area I don’t know anything about because I’m non-partisan. But it’s an area I better know something about. I look at 11 people and I have to assume those persons speak for the citizens.”

Murray said his welcome to Ann Arbor had been warm and that relations with the Council had developed as expected.

“At the first meeting I kept my mouth closed and it went very well. “But at the second meeting I had to give three reports each of which was politely shot down by a different political party.”