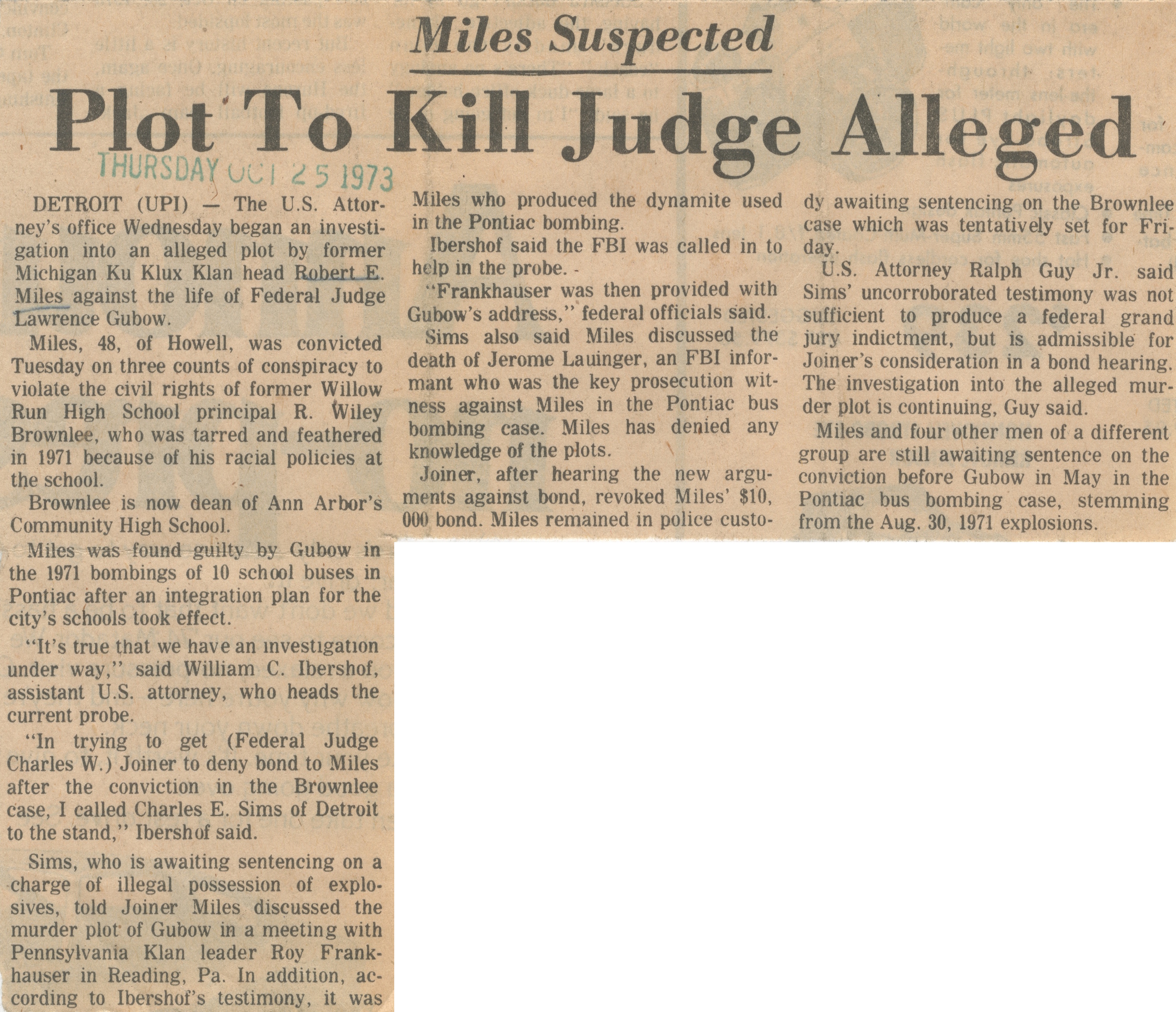 ﻿Miles Suspected<br><br>Plot To Kill Judge<br><br>THURSDAY UJI ^ s IW v3<br><br>THURSDAY «JI i 5 1973<br><br>DETROIT (DPI) - The U.S. Alter, ney's office Wednesday began an investigation into an alleged plot by former Michigan Ku Klux Klan head Robert E. Miles against the life of Federal Judge tawrence Gubow.<br><br>Miles, 48, of Howell, was convicted Tuesday on three counts of conspiracy to violate the civil rights of former Willow Run High School principal R. Wiley Brownlee, who was tarred and feathered in 1971 because of his racial policies at the school.<br><br>Miles who produced the dynamite used in the Pontiac bombing.<br><br>Ibershof said the FBI was called in to help in the probe.<br><br>"Frankhauser was then provided with Gubow's address.” federal officials said.<br><br>Sims also said Miles discussed the death of Jerome Lauinger, an FBI informant who was the key prosecution witness against Miles in the Pontiac bus bombing case. Miles has denied any knowledge of the plots.<br><br>Joiner, after hearing the new argu-<br><br>Brownlee is now dean of Ann Arbor’s ments a8a‘nst b°nd- revoked Miles' $10, Community High School. 000 bond. Miles remained in police custo-<br><br>Miles was found guilty by Gubow in the 1971 bombings of 10 school buses in Pontiac after an integration plan for the city’s schools took effect.<br><br>"It’s true that we have an investigation under w'ay,” said William C. Ibershof, assistant U.S. attorney, who heads the current probe.<br><br>"In trying to get (Federal Judge Charles W.) Joiner to deny bond to Miles after the conviction in the Brownlee Case, I called Charles E. Sims of Detroit to the stand,” Ibershof said.<br><br>Sims, who is awaiting sentencing on a charge of illegal possession of explosives, told Joiner Miles discussed the murder plot- of Gubow in a meeting with Pennsylvania Klan leader Roy Frankhauser in Reading, Pa. In addition, according to Ibershof’s testimony, it was<br><br>^ Alleged<br><br>dy awaiting sentencing on the Brownlee case which was tentatively set for Friday.<br><br>U.S. Attorney Ralph Guy Jr. said Sims’ uncorroborated testimony was not sufficient to produce a federal grand jury indictment, but is admissible for Joiner’s consideration in a bond hearing. The investigation into the alleged murder plot is continuing, Guy said.<br><br>Miles and four other men of a different group are still awaiting sentence on the conviction before Gubow in May in the Pontiac bus bombing case, stemming from the Aug. 30, 1971 explosions.