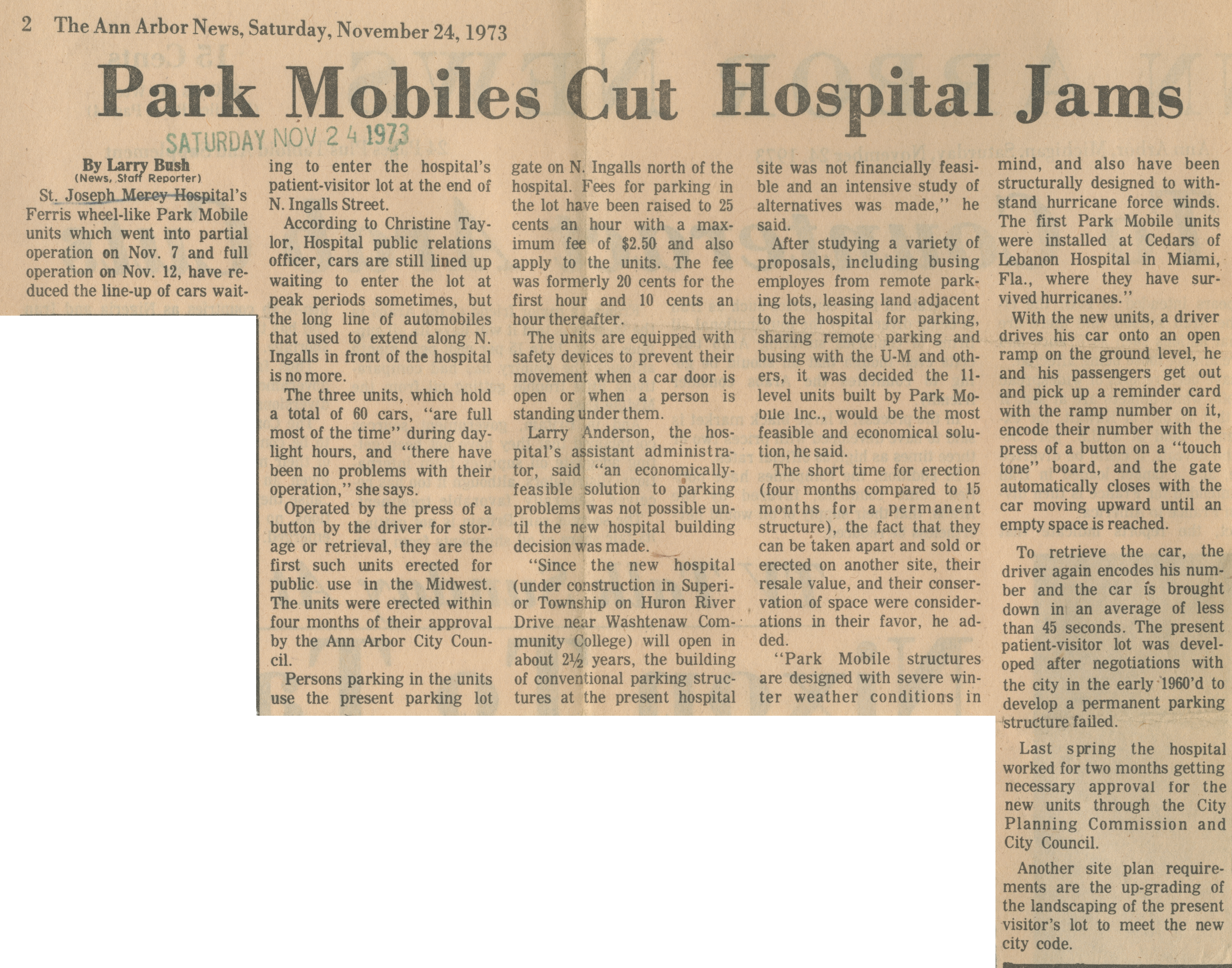 St. Joseph Mercy Hospital's Ferris wheel-like Park Mobile units which went into partial operation on Nov. 7 and full I operation on Nov. 12, have reduced the ing to enter the hospital's patient-visitor lot at the end of N. Ingalls Street. According to Christine Taylor, Hospital public relations officer, cars are still lined up waiting to enter the lot at peak periods sometimes, but , the long line of automobiles that used to extend along N. Ingalls in front of the hospital is no more. The three units, which hold I a total of 60 cars, "are f uil I most of the time" during dayI light hours, and "there have I been no problems with their I operation'shesays. Operated by the press of a I button by the driver for storI age or retrieval, they are the I first such units erected for I public use in the Midwest. I The units were erected within I four months of their approval I by the Ann Arbor City CounI cil. Persons parking in the units I use the present parking lot %és. on Ñ. Ingalls north of the hospital. Fees for parking in the lot have been raised to 25 cents an hour with a maximum fee of $2.50 and also apply to the units. The fee was forme'rly 20 cents for the first hour and 10 cents an hour thereafter. The units are equipped with safety devices to prevent their movement when a car door is open or when a person is standing under them. Larry Anderson, the hospital's assistant admigistrator, said "an economically feasible solution to parking problems was not possible until the new hospital building decisión was made. "Since the new hospital (under construction in Superior Township on Huron River Drive near Washtenaw Community College) will open in about V-k years, the building of conventional parking structures at the present hospital site was not financially feasible and an intensive study of alternatives was made," he said. After studying a variety of proposals, including busing employés from remote parking lots, leasing land adjacent to the hospital for parking, sharing remote parking and busing with the U-M and others, it was decided the 11level units built by Park MoDile Inc., would be the most feasible and economical solution, he said. The short time for erection (four months compared to 15 months for a permanent structure), the f act that they can be taken apart and sold or erected on another site, their resale valué, and their conservation of space were considerations in their favor, he added. "Park Mobile structures are designed with severe winter weather conditions in mind, and also have been ■ structurally designed to ■ stand hurricane f orce winds. I The first Park Mobile units ■".. were installed at Cedars of ■ Lebanon Hospital in Miami, I Fla., where they have sur-1 vivedhurricanes." With the new units, a driver I drives his car onto an open! ramp on the ground level, heB and his passengers get outB and piek up a reminder card ■ with the ramp number on it, 1 encode their number with the I press of a button on a "touch I tone" board, and the gate I automatically closes with the ■ car moving upward until an 1 empty space is reached. To retrieve the car, thei driver again encodes his ■ ber and the car is brought ■ down in an average of less I than 45 seconds. The present ■ patient-visitpr lot was ■ oped after negotiations with ■ the city in the early 1960'd to I develop a permanent parking structurefailed. l Last spring the hospital I I worked for two months getting I I necessary approval for the I I new units through the City I I Planning Commission and I I City Council. I Another site plan requireI ments are 'the up-grading of I the landscaping of the present I visitor's lot to meet the new I city code. B