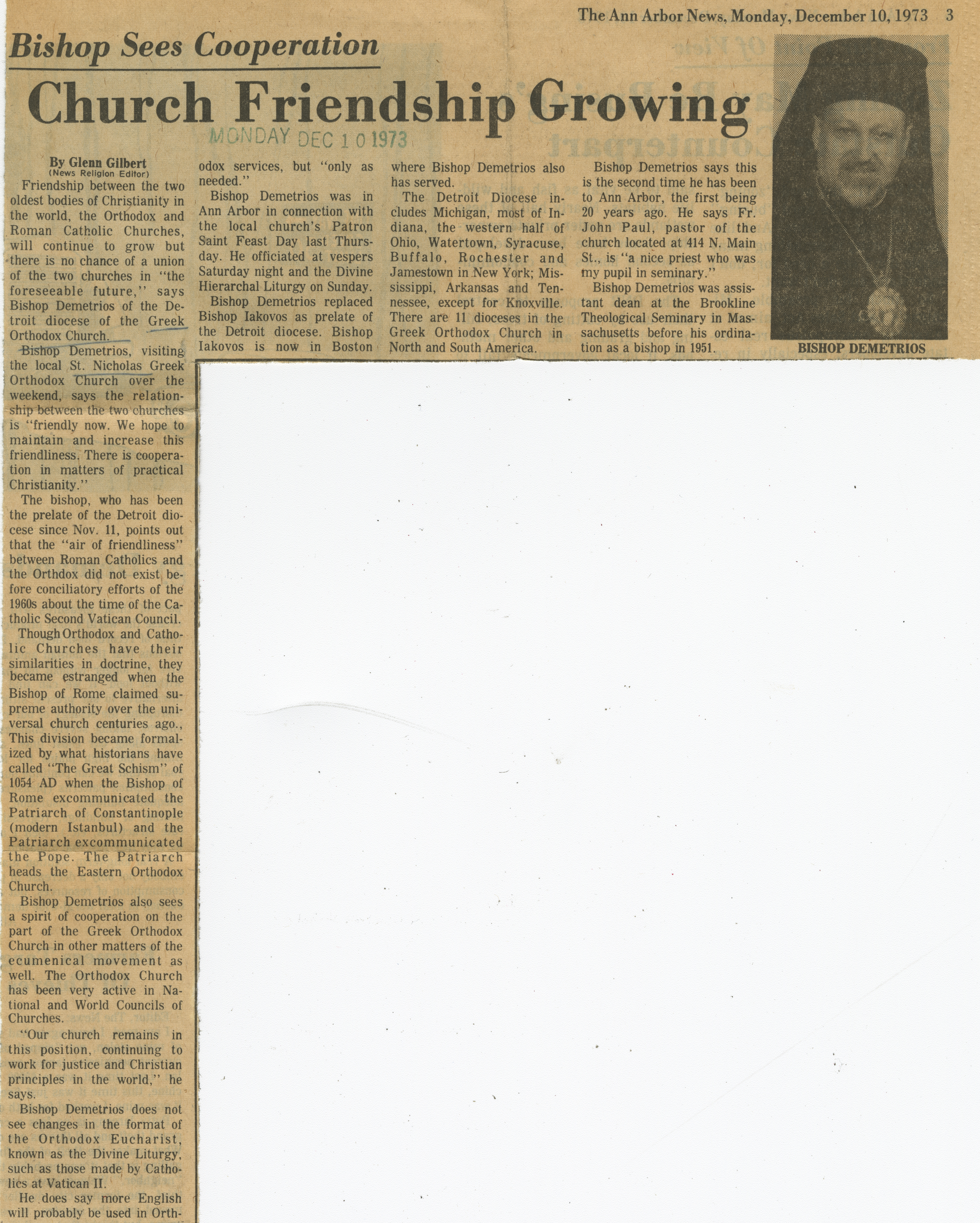 Friendship between the two oldest bodies of Christianity in the world, the Orthodox and Roman Catholic Churches, will continue to grow but there is no chance of a union of the two churches in “the foreseeable future,” says Bishop Demetrios of the Detroit diocese of the Greek Orthodox Church.

Bishop Demetrios, visiting the local St. Nicholas Greek Orthodox "Church over the weekend, says the relationship between the two churches is “friendly now. We hope to maintain and increase this friendliness. There is cooperation in matters of practical Christianity.”

The bishop, who has been the prelate of the Detroit diocese since Nov. 11, points out that the “air of friendliness” between Roman Catholics and the Orthodox did not exist, before conciliatory efforts of the 1960s about the time of the Catholic Second Vatican Council.

Though Orthodox and Catholic Churches have their similarities in doctrine, they became estranged when the Bishop of Rome claimed supreme authority over the universal church centuries ago. This division became formalized by what historians have called “The Great Schism” of 1054 AD when the Bishop of Rome excommunicated the Patriarch of Constantinople (modern Istanbul) and the Patriarch excommunicated the Pope. The Patriarch" heads the Eastern Orthodox Church.

Bishop Demetrios also sees , a spirit of cooperation on the part of the Greek Orthodox Church in other matters of the ecumenical movement as well. The Orthodox Church has been very active in National and World Councils of Churches.

“Our church remains in this position, continuing to work for justice and Christian principles in the world,” he says.

Bishop Demetrios does not see changes in the format of the Orthodox Eucharist, known as the Divine Liturgy, such as those made by Catholics at Vatican II.

He does say more English will probably be used in Orthodox services, but “only as needed.”

Bishop Demetrios was in Ann Arbor in connection with the local church’s Patron Saint Feast Day last Thursday. He officiated at vespers Saturday night and the Divine Hierarchal Liturgy on Sunday.

The Detroit Diocese includes Michigan, most of Indiana, the western half of Ohio, Watertown, Syracuse, Buffalo, Rochester and Jamestown in New York; Mississippi, Arkansas and Tennessee, except for Knoxville. There are 11 dioceses in the Greek Orthodox Church in North and South America.

Bishop Demetrios says this is the second time he has been to Ann Arbor, the first being 20 years ago. He says Fr. John Paul, pastor of the church located at 414 N. Main St., is “a nice priest who was my pupil in seminary.”

Bishop Demetrios was assistant dean at the Brookline Theological Seminary in Massachusetts before his ordination as a bishop in 1951.