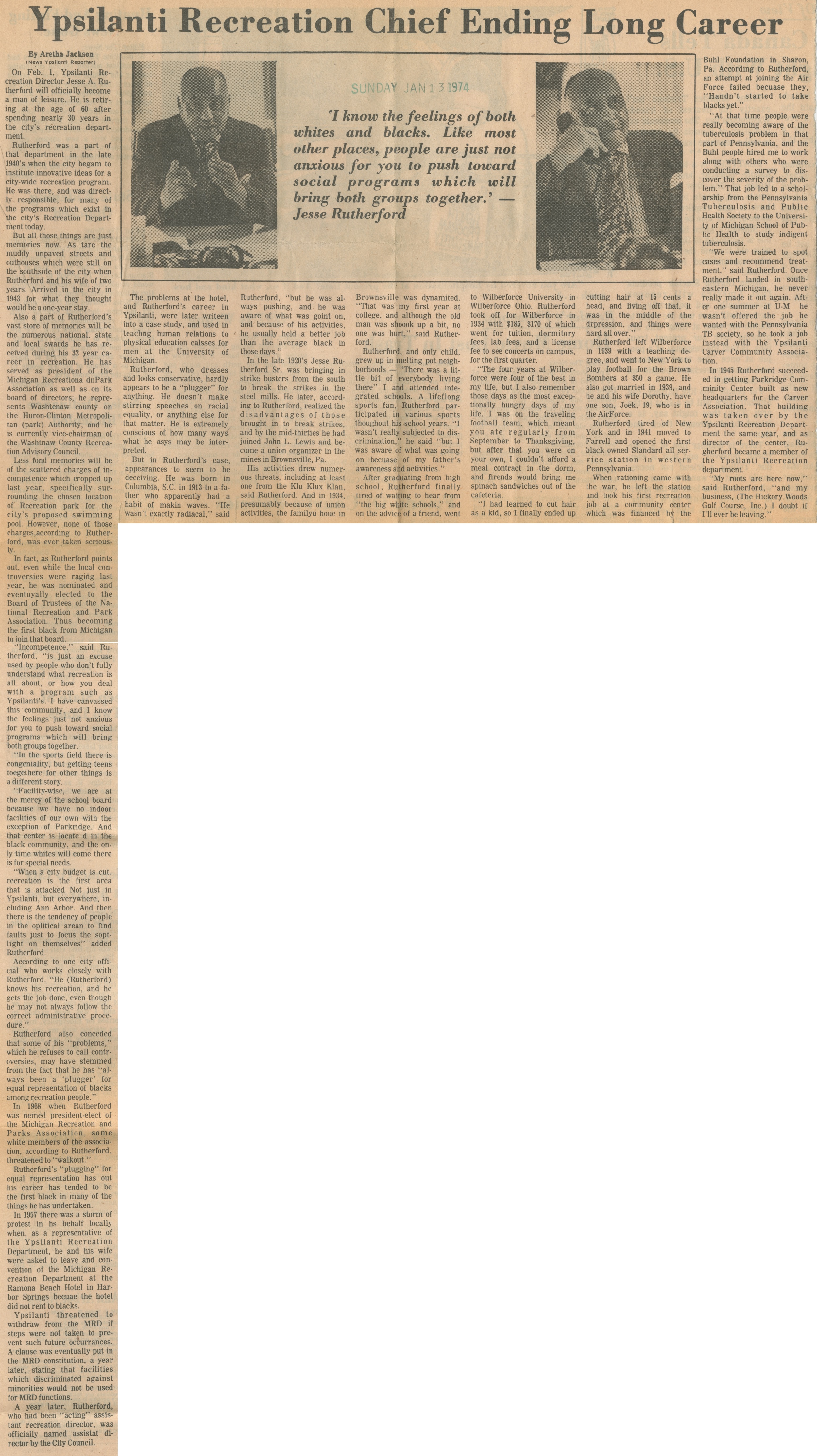 'I know the feeling of both whites and blacks. Like most other places, people are just not anxious for you topush toward social programs which will bring both groups together.' -  Jesse Rutherford

On Feb. 1, Ypsilanti Recreation Director Jesse A. Rutherford will officially become a man of leisure. He is retiring at the age of 60 after spending nearly 30 years in the city's recreation department.

Rutherford was a part of that department in the late 1940's when the city began to institute innovative ideas for a city-wide recreation program. He was there, and was directly responsible, for many of the programs which exist in the city's Recreation Department today.

But all those things are just memories now. As tare the muddy unpaved streets and outhouses which were still on the southside of the city in 1943 for what they thought would be a one-year stay.

Also part of Ruthford's vast store of memories will be the numerous national, state and local swards he has received during his 32 year career in recreation. He has served as president of the Michigan Recreation and Park Association as well as on its board of directors; he represents Washtenaw county on the Huron-Clinton Metropolitan (park) Authority; and he is currently vice-chairman of the Washtenaw County Recreation Advisory Council.

Less fond memories will be of the scattered charges of incompetence which cropped up last year, specifically surrounding the chosen location of the Recreation park for the city's proposed swimming pool. However, none of those charges, according to Ruthford, was ever taken seriously.

In fact, as Ruthford points out, even while the local controversies were raging last year, he was nominated and eventually elected to the board of Trustees of the National Recreation and Park Association. Thus becoming the first black from Michigan to join that board.

"Incompetence," said Ruthford, "is just an excuse used by people who don't fully understand what recreation is all about, or how you deal with a program such as Ypsilanti's. I have canvassed this community, and I know feelings just not anxious for you to push toward social programs which will bring both groups together.

"In the sports field there is congeniality, but getting teens together for other things is a different story.

"Facility-wise, we are at the mercy of the school board because we have no indoor facilities of our own with the exception of Parkridge. And that center is located in the black community, and the only time whites will come there is for special needs.

"When a city budget is cut, recreation is the first area that is attacked Not just in Ypsilanti, but everywhere, including Ann Arbor. And then there is the tendency of people in the political area to find faults just to focus the spotlight on themselves" added Ruthford.

According to one city official who works closely with Ruthford. "He (Ruthford) knows his recreation, and the correct administrative procedure."

Ruthford also conceded that some of his "problems," which he refuses to call controversies, may have stemmed from the fact that he has "always been a 'plugger' for equal representation of blacks among recreation people."

In 1968 when Ruthford was nemed president-elect of the Michigan Recreation and Parks Association, some white members of the association, according to Ruthford, threatened to "walkout."

Ruthford's "plugging" for equal representation has throughout his career has tended to be the first black in many of the things he has undertaken.

In 1957 there was a storm of protest in his behalf locally when, as a representative of the Ypsilanti Recreation Department, he and his wife were asked to leave a convention of the Michigan Recreation Department at the Ramona Beach Hotel in Harbor Springs because the hotel did not rent to blacks.

Ypsilanti threatened to withdraw from the MRD if steps were not taken to prevent such future occurrences. A clause was eventually put in the MRD constitution, a year later, stating that facilities which discriminated against minorities would not be used for MRD functions.

A year later, Rutherford, who had been "acting" assistant recreation director, was officially named assistant director by the City Council.

The problems at the hotel, and Ruterford's career in Ypsilanti, were later written into a case study, and used in teaching human relations to physical education classes for men at the University of Michigan.

Rutherford. who dresses and looks conservative, hardly appears to a "plugger" for anything. He doesn't make stirring speeches on racial equality, or anything else for that matter. He is extremely conscious of how many ways what he and says may be interpreted.

But in Rutherford's case, appearances to seem to be deceiving. He was born in Columbia, S. C. in 1913 to a father who apparently had a habit of makin waves. "He wasn't exactly radical," said Rutherford, "but he was always pushing, and he was aware of what was going on, and because of his activities, he usually held a better job than the average black in those days."

His activities drew numerous threats, including at least one from the Klu Klux Klan, said Rutherford. And in 1934, presumably because of union activities, the family house in Brownsville was dynamited.
"That was my first year at college, and although the old man was shook up a bit, no one was hurt," said Rutherford.

Rutherford, an only child, grew up in melting pot neighborhoods - "There was a little bit of everybody living there" I had attended integrated schools. A life long sports fan, Rutherford participated in various in various sports throughout his school years. "I wasn't really subjected to discrimination, " he said "but I was aware of what was going on because of my father's awareness and activities.

After graduating from high school, Rutherford finally tired of waiting to hear from "the big white schools," and on the advice of a friend, went to Wilberforce University in Wilberforce Ohio. Rutherford took off for Wilberforce in 1934 with $185, $170 of which went for tuition, dormitory fees, lab fees and a license fee to see concerts on campus, for the first quarter.

"The four years at Wilberforce were four of the best in my life, but I also remember those days as the most exceptionally hungry days of my life. I was on the traveling football team, which meant you ate regularly from September to Thanksgiving, but after that you were on your own. I couldn't afford a meal contract in the dorm, and friends would bring me spinach sandwiches out of the cafeteria.

"I had learned to cut hair as a kid, so I finally ended up cutting hair at 15 cents a head, and living off that, it was in the middle of the depression, and things were hard allover."

Ruthford left Wiberforce in 1939 with a teaching degree, and went to New York to play football for the Brown Bombers at $ 50 a game. He also got married in 1939, and he and his wife Dorothy, have on son, Joel, 19, who is in the AirForce.

Rutherford tired of New York and in 1941 moved to Farrell and opened the first recreation job at a community center which was financed by the Buhl Foundation in Sharon, Pa. According to Rutherford, an attempt at joining the AirForce failed because they, "Hadn't started to take blacks yet."

"At the time people were really becoming aware of the tuberculosis problem in that part of Pennsylvania, and the Buhl people hired me to work along with others who were conducting a survey to discover the severity of the problem." That job led to a scholarship from the Pennsylvania Tuberculosis and Public Health Society to the University of Michigan School of Public Health to study indigent tuberculosis.

"We were trained to spot cases and recommend treatment," said Rutherford. Once Rutherford landed in southeastern Michigan, he never really made it out again. After one summer at U-M he wasn't offered the job he wanted in Pennsylvania TB society, so he took a job instead with the Ypsilanti Carver Community Association.

"My roots are here now," said Rutherford, "and my business, (The Hickory Woods Golf Course, Inc.) I doubt if I'll ever be leaving."