They Want You - To Raise The Roof 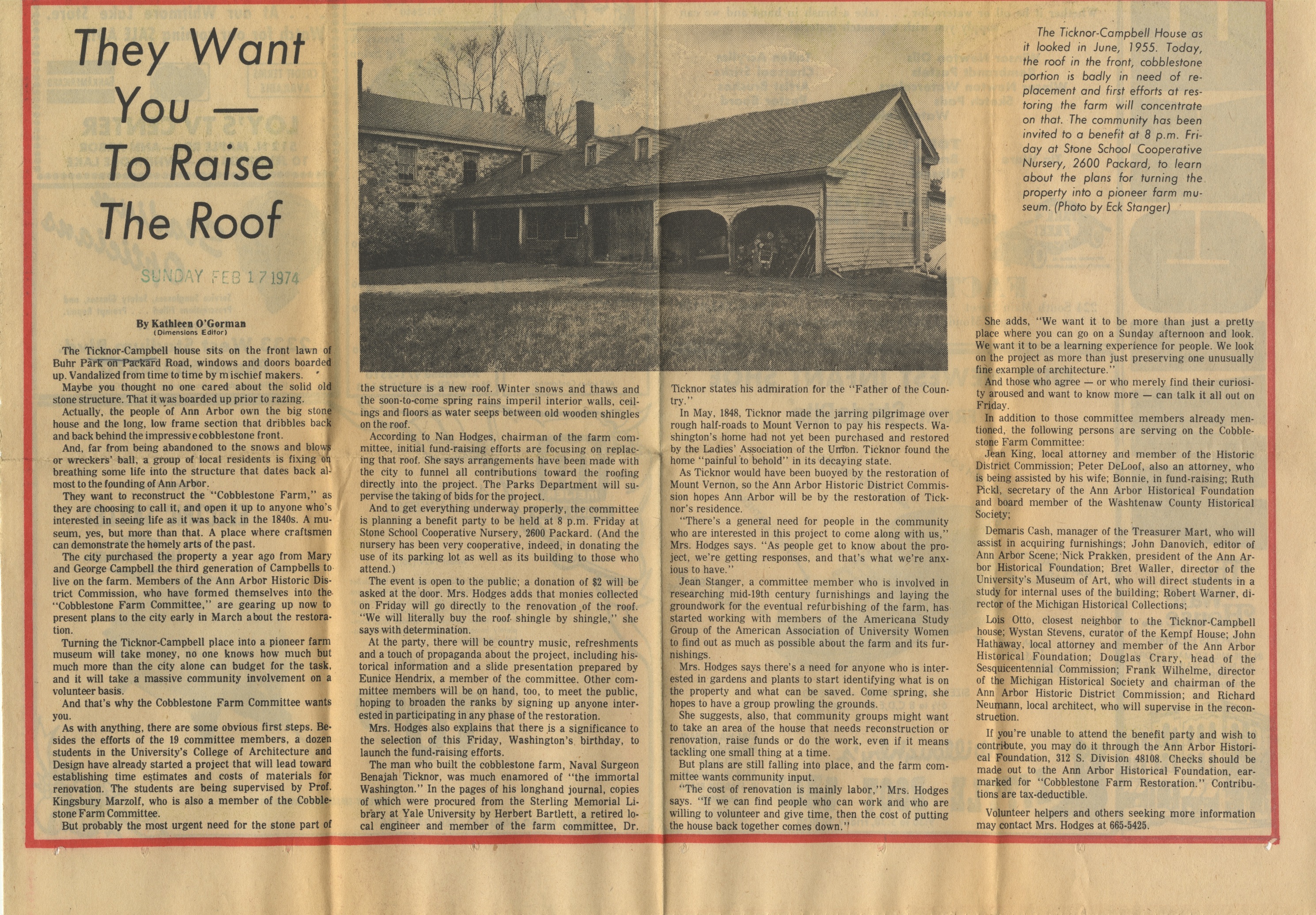 They Want You-To Raise The Roof

The Ticknor-Cambell house sits on the front lawn of Buhr Park on Packard Road, windows and doors boarded up.  Vandalized from time to time by mischief makers.

Maybe you thought no one cared about the solid old stone structure.  That it was boarded up prior to razing.

Actually, the people of Ann Arbor own the big stone house and the long, low frame section that dribbles back and back behind the impressive cobblestone front.﻿

And, far from being abandoned to the snow and blows or wreckers' ball, a group of local residents is fixing on breathing some life into the structure that dates back almost to the founding of Ann Arbor.

They want to reconstruct the "Cobblestone Farm," as they are choosing to call it, and open it up to anyone who's interested in seeing life as it was back in the 1840's.  A museum, yes, but more than that.  A place where craftsmen can demonstrate the homely arts of the past.

The city purchased the property a year ago from Mary and George Campbell the third generation of Campbells to live on the farm.  Members of the Ann Arbor Historic Distirct Commission who have formed themselves into the "Cobblestone Farm Committee," are gearing up now to present plans to the city early in March about the restoration.

Turning the Ticknor-Campbell place into a pioneer farm museum will take money, no one knows how much but much more than the city alone can budget for the task, and it will take a massive community involvement on a volunteer basis.

And that's why the Cobblestone Farm Committee wants you.

As with anything, there are some obvious first steps.  Besides the efforts of the 19 committee members, a dozen students in the University's College of Architecture and Design have already started a project that will lead toward establishing time estimates and costs of materials for renovation.  The students are being supervised by Prof. Kingsbury Marzolf, who is also a member of the Cobblestone Farm Committee.

But probably the most urgent need for the stone part of the structure is a new roof.  Winter snows and thaws and the soon-to-come spring rains imperil interior walls, ceilings and floors as water seeps between old wooden shingles on the roof.

According to Nan Hodges, chairman of the farm committee, initial fund-raising efforts are focusing on replacing that roof.  She says arrangements have been made with the city to funnel all contributions toward the roofing directly into the project.  The Parks Department will supervise the taking of bids for the project.

And to get everything underway properly, the committee is planning a benefit party to be held at 8 p.m. Friday at Stone School Cooperative Nursery, 2600 Packard.  (And the nursery has been cooperative, indeed, in donating the use of its parking lot as well as its building to those who attend.)

The event is open to the public; a donation of $2 will be asked at the door.  Mrs. Hodges adds that monies collected on Friday will go directly to the renovation of the roof.  "We will literally buy the roof shingle by shingle," she says with determination.

At the party, there will be country music, refreshments and a touch of propaganda about the project, including historical information and a slide presentation prepared by Eunice Hendrix, a member of the committee.  Other committee members will be on hand, too, to meet the public, hoping to broaden the ranks by signing up anyone interested in participating in any phase of the restoration.

Mrs. Hodges also explains that there is significance to the selection of this Friday, Washington's birthday, to launch the fund-raising efforts.

The man who built the cobblestone farm, Naval Surgeon Benajah Ticknor, was much enamored of "the immortal Washington."  In the pages of his longhand journal, copies of which were procured from the Sterling Memorial Library at Yale University by Herbert Bartlett, a retired local engineer and member of the farm committee Dr. Ticknor states his admiration for the "Father of the Country."

In May, 1848, Ticknor made the jarring pilgrimage over rough half-roads to Mount Vernon to pay his respects.  Washinton's home had not yet been purchase and restored by the Ladies' Association of the Union.  Ticknor found the home "painful to behold" in its decaying state.

"There's a general need for people in the community who are interested in this project to come along with us," Mrs. Hodges says.  "As people get to know about the project we're getting responses and that's what we're anxious to have."

Jean Stanger, a committee member who is involved in researching mid-19th century furnishings and laying the groundwork for the eventual refurbishing of the farm, has started working with members of the Americana Study Group of the American Association of University Women to find out as much as possible about the farm and its furnishings.

Mrs. Hodges says there's a need for anyone who is interested in gardens and plants to start identifying what is on the property and what can be saved.  Come spring, she hopes to have a group prowling the grounds.

She suggests, also, that community groups might want to take an area of the house that needs reconstruction or renovation raise funds or do work, even if it means tackling one small thing at a time.

But plans are still falling into place, and the farm committee wants community input.

"The cost of renovation is mainly labor," Mrs. Hodges says.  "If we can find people who can work and who are willing to volunteer and give time, then the cost of putting the house back together comes down."

And those who agree-or who merely find their curiosity aroused and want to know more-can talk it all out on Friday.

In addition to those committee members already mentioned, the following persons are serving on the Cobblestone Farm Committee:

Volunteer helpers and others seeing more information may contact Mrs. Hodges at 665-5425.