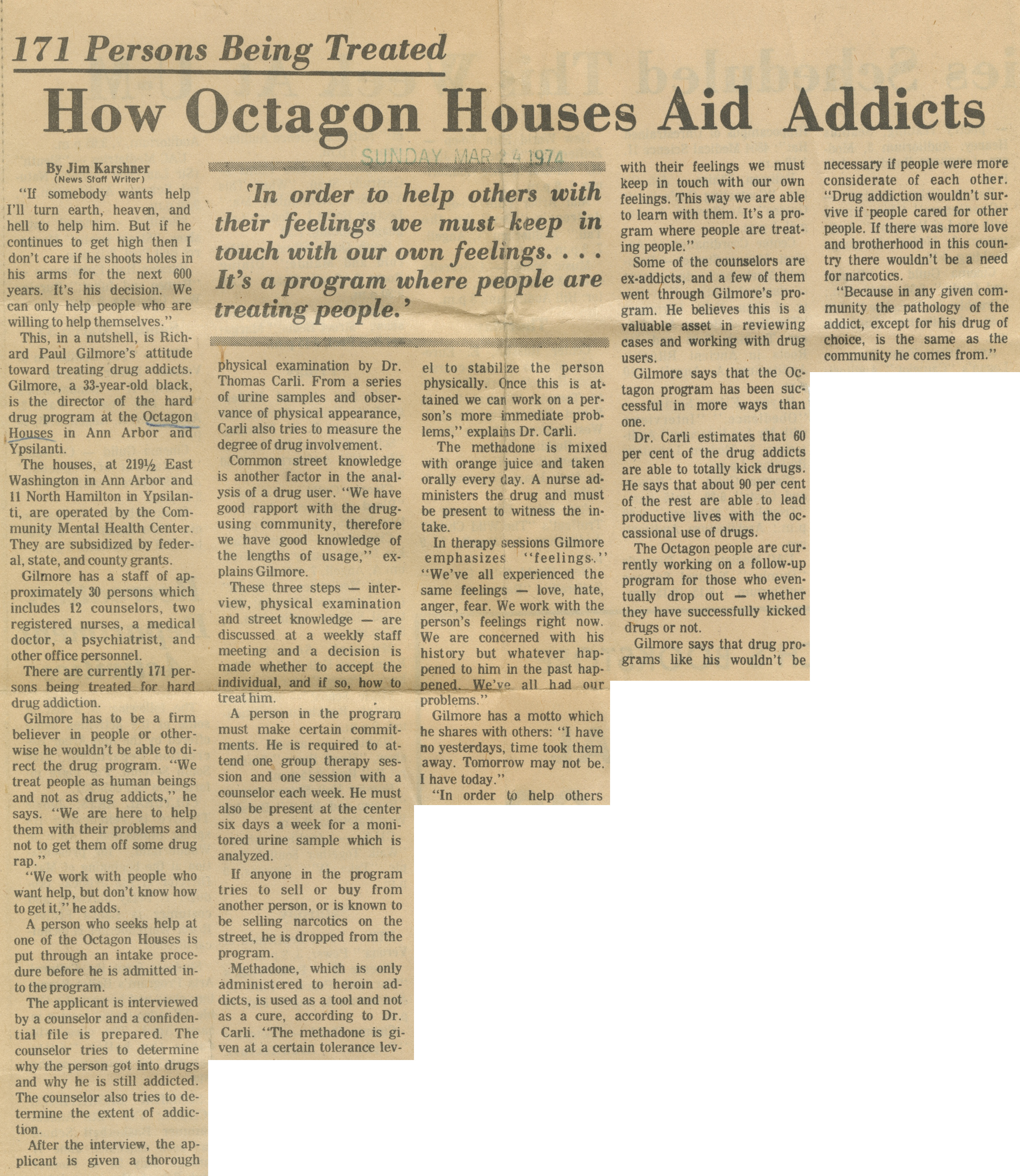 “If somebody wants help I'll turn earth, heaven, and hell to help him. But if he continues to get high then I don’t care if he shoots holes in his arms for the next 600 years. It’s his decision. We can only help people who are willing to help themselves.”

This, in a nutshell, is Richard Paul Gilmore’s attitude toward treating drug addicts. Gilmore, a 33-year-old black, is the director of the hard drug program at the Octagon Houses in Ann Arbor and Ypsilanti.

The houses, at 219½ East Washington in Ann Arbor and 11 North Hamilton in Ypsilanti, are operated by the Community Mental Health Center. They are subsidized by federal, state, and county grants.

Gilmore has a staff of approximately 30 persons which includes 12 counselors, two registered nurses, a medical doctor, a psychiatrist, and other office personnel.

There are currently 171 persons being treated for hard drug addiction.

Gilmore has to be a firm believer in people or otherwise he wouldn’t be able to direct the drug program. “We treat people as human beings and not as drug addicts,” he says. “We are here to help them with their problems and not to get them off some drug rap.”

“We work with people who want help, but don’t know how to get it,” he adds.

After the interview, the applicant is given a thorough physical examination by Dr. Thomas Carli. From a series of urine samples and observance of physical appearance, Carli also tries to measure the degree of drug involvement.

Common street knowledge is another factor in the analysis of a drug user. “We have good rapport with the drug-using community, therefore we have good knowledge of the lengths of usage,” explains Gilmore.

These three steps — interview, physical examination and street knowledge — are discussed at a weekly staff meeting and a decision is made whether to accept the individual, and if so, how to treat him.

A person in the program must make certain commitments. He is required to attend one group therapy session and one session with a counselor each week. He must also be present at the center six days a week for a monitored urine sample which is analyzed.

If anyone in the program tries to sell or buy from another person, or is known to be selling narcotics on the street, he is dropped from the program.

Methadone, which is only administered to heroin addicts, is used as a tool and not as a cure, according to Dr. Carli. 'The methadone is given at a certain tolerance level to stabilize the person physically. Once this is attained we car work on a person’s more immediate problems,” explains Dr. Carli.

The methadone is mixed with orange juice and taken orally every day. A nurse administers the drug and must be present to witness the intake.

In therapy sessions Gilmore emphasizes “feelings.” “We’ve all experienced the same feelings — love, hate, anger, fear. We work with the person’s feelings right now. We are concerned with his history but whatever happened to him in the past happened. We've all had our problems."

Gilmore has a motto which he shares with others: “I have no yesterdays, time took them away. Tomorrow may not be. I have today."

“In order to help others with their feelings we must keep in touch with our own feelings. This way we are able to learn with them. It’s a program where people are treating people.”

Some of the counselors are ex-addicts, and a few of them went through Gilmore's program. He believes this is a valuable asset in reviewing cases and working with drug users.

Gilmore says that the Octagon program has been successful in more ways than one.

The Octagon people are currently working on a follow-up program for those who eventually drop out — whether they have successfully kicked drugs or not.

Gilmore says that drug programs like his wouldn’t be necessary if people were more considerate of each other. “Drug addiction wouldn’t survive if people cared for other people. If there was more love and brotherhood in this country there wouldn't be a need for narcotics.

"Because in any given community the pathology of the addict, except for his drug of choice, is the same as the community he comes from.”