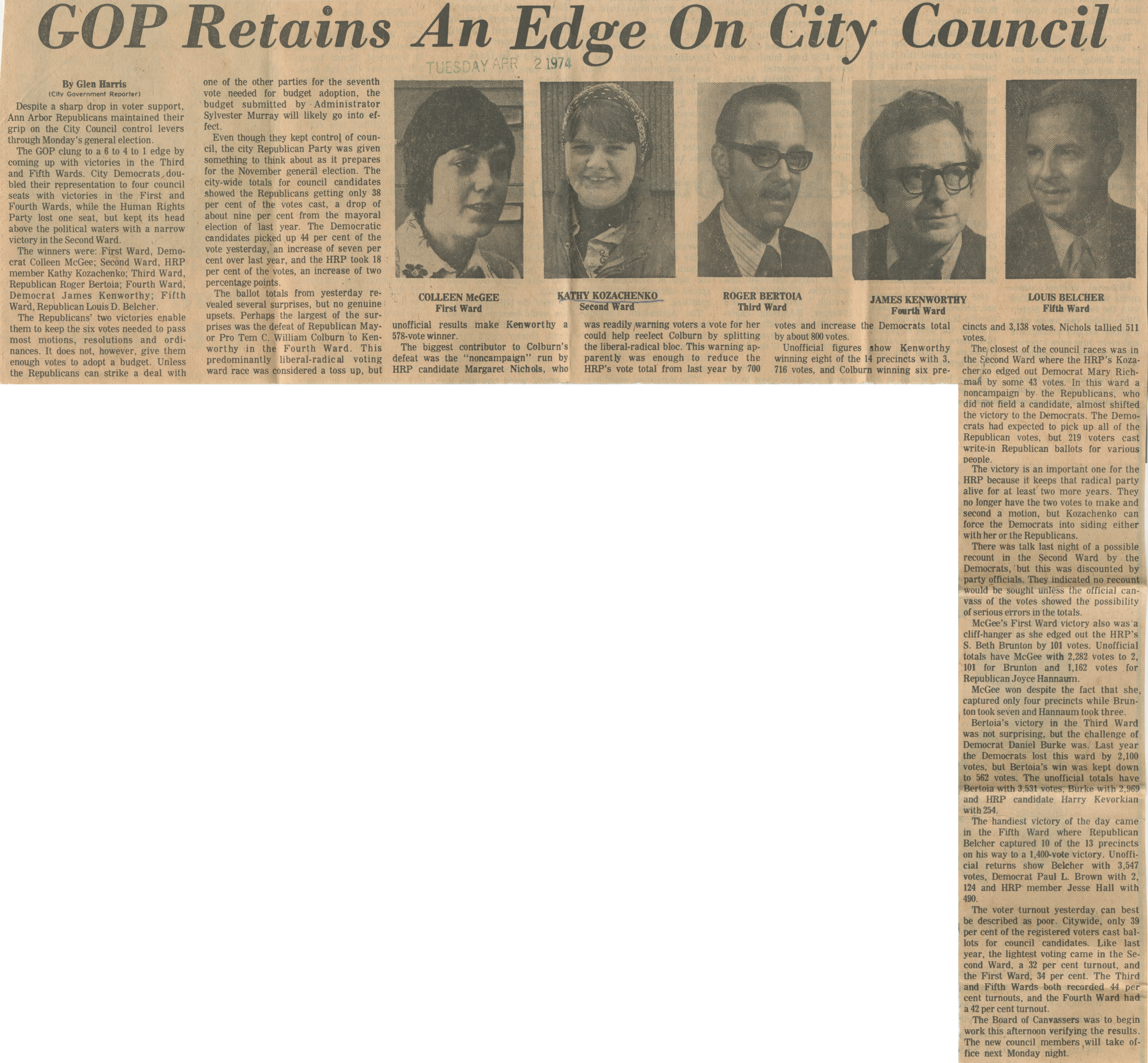 Despite a sharp drop in voter support, Ann Arbor Republicans maintained their grip on the City Council control levers through Monday’s general election.

The GOP clung to a 6 to 4 to 1 edge by coming up with victories in the Third and Fifth Wards. City Democrats, doubled their representation to four council seats with victories in the First and Fourth Wards, while the Human Rights Party lost one seat, but kept its head above the political waters with a narrow victory in the Second Ward.

The Republicans’ two victories enable them to keep the six votes needed to pass most motions, resolutions and ordinances. It does not, however, give them enough votes to adopt a budget. Unless the Republicans can strike a deal with one of the other parties for the seventh vote needed for budget adoption, the budget submitted by Administrator Sylvester Murray will likely go into effect.

The ballot totals from yesterday revealed several surprises, but no genuine upsets. Perhaps the largest of the surprises was the defeat of Republican Mayor Pro Tem C. .William Colburn to Ken-worthy in the Fourth Ward. This predominantly liberal-radical voting ward race was considered a toss up, but unofficial results make Kenworthy a 578-vote winner.

The biggest contributor to Colburn's defeat was the “noncampaign” run by HRP candidate Margaret Nichols, who was readily yarning voters a vote for her could help reelect Colburn by splitting the liberal-radical bloc. This warning apparently was enough to reduce the HRP’s vote total from last year by 700 votes and increase the Democrats total by about 800 votes.

The, closest of the council races was in the Second Ward where the HRP’s Kozachenko edged out Democrat Mary Richman by some 43 votes. In this ward a noncampaign by. the Republicans, who did not field a candidate, almost shifted the victory to the Democrats. The Democrats had expected to pick up all of the Republican votes, but 219 voters cast write-in Republican ballots for various people.

The victory is an important one for the HRP because it keeps that radical party alive for at least two more years. They no longer have the two votes to make and second a motion, but Kozachenko can force the Democrats into siding either with her or the Republicans.

There was talk last night of a possible recount in the Second Ward by the Democrats, but this was discounted by party officials. They indicated no recount would be sought unless the official canvass of the votes showed the possibility of serious errors in the totals.

McGee's First Ward victory also was a cliff-hanger as she edged out the HRP's S. Beth Brunton by 101 votes. Unofficial totals have McGee with 2,282 votes to 2,101 for Brunton and 1,162 votes for Republican Joyce Hannaum.

McGee won despite the fact that she, captured only four precincts while Brunton took seven and Hannaum took three.

Bertoia’s victory in the Third Ward was not surprising, but the challenge of Democrat Daniel Burke was. Last year the Democrats lost this ward by 2,100 votes, but Bertoia’s win was kept down to 562 votes. The unofficial totals have Bertoia with 3,531 votes, Burke with 2,969 and HRP candidate Harry Kevorkian with 254.

The handiest victory of the day came in the Fifth Ward where Republican Belcher captured 10 of the 13 precincts on his way to a 1,400-vote victory. Unofficial returns show Belcher with 3,547 votes, Democrat Paul L. Brown with 2,124 and HRP member Jesse Hall with 490.

The voter turnout yesterday can best be described as poor. Citywide, only 39 per cent of the registered voters cast ballots for council candidates. Like last year, the lightest voting came in the Second Ward, a 32 per cent turnout, and the First Ward, 34 per cent. The Third and Fifth Wards both recorded 44 per cent turnouts, and the Fourth Ward had a 42 per cent turnout.

The Board of Canvassers was to begin work this afternoon verifying the results. The new council members .will take office next Monday night.