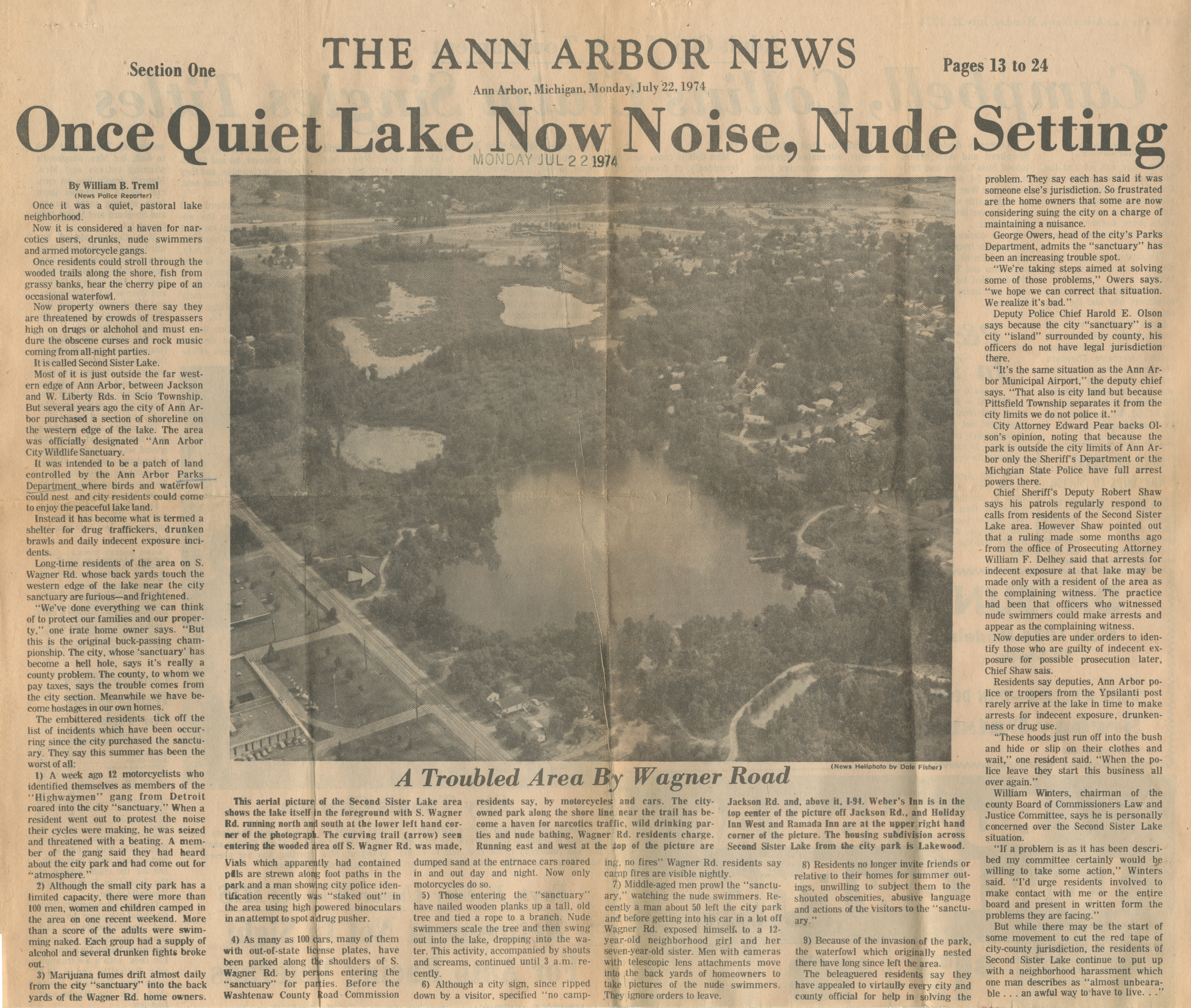 Once it was a quiet, pastoral lake neighborhood.

Now it is considered a haven for narcotics users, drunks, nude swimmers and armed motorcycle gangs.

Once residents could stroll through the wooded trails along the shore, fish from grassy banks, hear the cherry pipe of an occasional waterfowl.

Now property owners there say they are threatened by crowds of trespassers high on drugs or alcohol and must endure the obscene curses and rock music coming from all-night parties.

It is called Second Sister Lake.

Most of it is just outside the far western edge of Ann Arbor, between Jackson and W. Liberty Rds. in Scio Township. But several years ago the city of Ann Arbor purchased a section of shoreline on the western edge of the lake. The area was officially designated “Ann Arbor City Wildlife Sanctuary.

It was intended to be a patch of land controlled by the Ann Arbor Parks Department where birds and waterfowl could nest and city residents could come to enjoy the peaceful lake land.

Instead it has become what is termed a shelter for drug traffickers, drunken brawls and daily indecent exposure incidents.

Long-time residents of the area on S. Wagner Rd. whose back yards touch the western edge of the lake near the city sanctuary are furious—and frightened.

“We’ve done everything we can think of to protect our families and our property,” one irate home owner says. “But this is the original buck-passing championship. The city, whose ‘sanctuary’ has become a hell hole, says it’s really a county problem. The county, to whom we pay taxes, says the trouble comes from the city section. Meanwhile we have become hostages in our own homes.

The embittered residents tick off the list of incidents which have been occurring since the city purchased the sanctuary. They say this summer has been the worst of all:

1) A week ago 12 motorcyclists who identified themselves as members of the “Highwaymen” gang from Detroit roared into the city “sanctuary.” When a resident went out to protest the noise their cycles were making, he was seized and threatened with a beating. A member of the gang said they had heard about the city park and had come out for “atmosphere.”

2) Although the small city park has a limited capacity, there were more than 100 men, women and children camped in the area on one recent weekend. More than a score of the adults were swimming naked. Each group had a supply of alcohol and several drunken fights broke out.

3) Marijuana fumes drift almost daily from the city “sanctuary” into the back yards of the Wagner Rd. home owners. Vials Which apparently pills are strewn along foot paths in the park and a man showing city identification recently was the area using high powered binoculars in an attempt to spot a drug pusher.

This aerial picture of the Second Sister Lake area shows the lake itself in the foreground with S. Wagner Rd. running north and south at the lower left hand corner of the photograph. The curving trail (arrow) seen entering the wooded area off S. Wagner Rd. was made,
residents say, by motorcycles and cars. The city-owned park along the shore line near the trail has become a haven for narcotics traffic, wild drinking parties and nude bathing, Wagner Rd. residents charge. Running east and west at the top of the picture are Jackson Rd. and, above it. 1-94. Weber’s Inn is in the top center of the picture off Jackson Rd., and Holiday Inn West and Ramada Inn are at the upper right hand corner of the picture. The housing subdivision across Second Sister Lake from the city park is Lakewood.

4) As many as 100 cars, many of them with out-of-state license plates, have been parked along the shoulders of S. Wagner Rd. by persons entering the “sanctuary” for parties. Before the Washtenaw County toad Commission dumped sand at the entrance cars roared in and out day and night. Now only motorcycles do so.

5) Those entering the “sanctuary” have nailed wooden planks up a tall, old tree and tied a rope to a branch. Nude swimmers scale the tree and then swing out into the lake, dropping into the water. This activity, accompanied by shouts and screams, continued until 3 a.m. recently.

6) Although a city sign, since ripped down by a visitor, specified “no camping, no fires” Wagner Rd. residents say camp fires are visible nightly.

7) Middle-aged men prowl the “sanctuary,” watching the nude swimmers. Recently a man about 50 left the city park and before getting into his car in a lot off Wagner Rd. exposed himself, to a 12-year-old neighborhood girl and her seven-year-old sister. Men with cameras with telescopic lens attachments move into the back yards of homeowners to take pictures of the nude swimmers.They ignore orders to leave.

8) Residents no longer invite friends or relative to their homes for summer outings, unwilling to subject them to the shouted obscenities, abusive language and actions of the Visitors to the “sanctuary.”

9) Because of the invasion of the park, the waterfowl which originally nested there have long since left the area.

The beleaguered residents say they have appealed to virtually every city and county official for help in solving the problem. They say each has said it was someone else’s jurisdiction. So frustrated are the home owners that some are now considering suing the city on a charge of maintaining a nuisance.

George Owers, head of the city’s Parks Department, admits the “sanctuary” has been an increasing trouble spot.

“We’re taking steps, aimed at solving some of those problems,” Owers says, “we hope we can correct that situation. We realize it’s bad.”

Deputy Police Chief Harold E. Olson says because the city “sanctuary” is a city “island” surrounded by county, his officers do not have legal jurisdiction there.

“It’s the same situation as the Ann Arbor Municipal Airport,” the deputy chief says. “That also is city land but because Pittsfield Township separates it from the city limits we do not police it.”

City Attorney Edward Pear backs Olson’s opinion, noting that because the park is outside the city limits of Ann Arbor only the Sheriff’s Department or the Michigan State Police have full arrest powers there.

Chief Sheriff’s Deputy Robert Shaw says his patrols regularly respond to calls from residents of the Second Sister Lake area. However Shaw pointed out that a ruling made some months ago from the office of Prosecuting Attorney William F. Delhey said that arrests for indecent exposure at that lake may be made only with a resident of the area as the complaining witness. The practice had been that officers who witnessed nude swimmers could make arrests and appear as the complaining witness.

Now deputies are under orders to identify those who are guilty of indecent exposure for possible prosecution later. Chief Shaw says.

Residents say deputies, Ann Arbor police or troopers from the Ypsilanti post rarely arrive at the lake in time to make arrests for indecent exposure, drunkenness or drug use.

“These hoods just run off into the bush and hide or slip on their clothes and wait,” one resident said. “When the police leave they start this business all over again.”

William Winters, chairman of the county Board of Commissioners Law and Justice Committee, says he is personally concerned over the Second Sister Lake situation.

“If a problem is as it has been described my committee certainly would be willing to take some action,” Winters said. “I’d urge residents involved to make contact with me or the entire board and present in written form the problems they are facing.”

But while there may be the start of some movement to cut the red tape of city-county jurisdiction, the residents of Second Sister Lake continue to put up with a neighborhood harassment which one man describes as “almost unbearable...an awful way to have to live..."