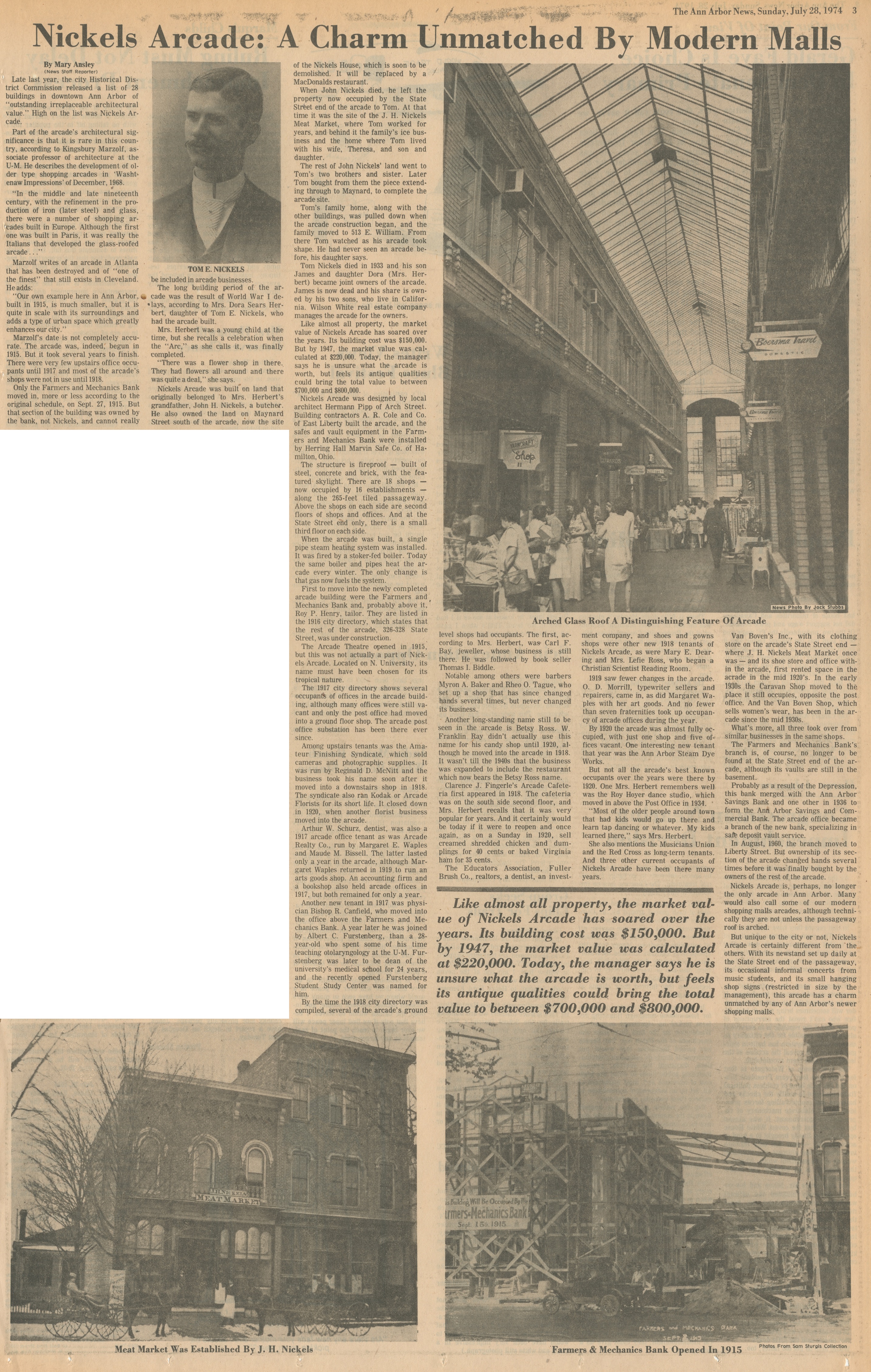 Late last year, the city Historical  District Commission released a list of 28 buildings in downtown Ann Arbor of “outstanding your place above architectural value.“  High on the list was Nickels Arcade.

Part of the arcade’s architectural significance is that it is rare in this country, according to Kingsbury Marzolf, associate professor of architecture at the U–M. He describes the development of older type shopping arcades in ‘Washtenaw Impressions’ of December, 1968.

“In the middle and late nineteenth century, with the refinement in the production of iron (later steel) and glass, there were a number of shopping arcades built in Europe. Although the first one was built in Paris, it was really the Italians that developed the glass-roofed arcade…”

Marzolf writes of an arcade in Atlanta that has been destroyed and of “one of the finest” that still exists in Cleveland.

“Our own example here in Ann Arbor built in 1915, is much smaller, but it is quite in scale with its surroundings and adds a type of urban space which greatly enhances our city.“

Marzolf’s date is not completely accurate. The arcade was, indeed, begun in 1915. But it took several years to finish. There were very few upstairs offices occupants until 1917 and most of the arcade’s shops were not in use until 1918.

Only the Farmers and Mechanics Bank moved in, more or less according to the original schedule, on September 27, 1915. but that section of the building was owned by the bank, not Nickels, and cannot really be included in arcade businesses.

The long building period of the arcade was the result of World War I delays according to Mrs. Dora Sears Herbert, daughter of Tom E. Nickels, who had the arcade built.

Mrs. Herbert was a young child at the time, but she recalls a celebration when the “Ark,” as she called it, was finally completed.

“There was a flower shop in there. They have flowers all around and there was quite a deal,“ she says.

Nickels Arcade was built on land that originally belong to Mrs. Herbert’s grandfather’s John H. Nickels, a butcher. He also owned land on Maynard Street south of the arcade, now the site of Nickels House, which is soon to be demolished. It will be replaced by a McDonald’s restaurant.

When John Nickels died, he left the property now accompanied by the State Street end of the arcade to Tom.  at that time it was the site of the J. H. Nickels was Meat Market, where Tom worked for years, and behind it the family’s ice business and the home where Tom lived with his wife, Theresa, and a son and daughter.

The rest of John Nickels’ land went to Tom’s two brothers and sister. Later Tom bought from them the piece extending through to Maynard, to complete the arcade site.

Tom’s family home, along with the other buildings, was pulled down when the arcade construction began, and the family moved to 513 E. William. From there Tom watched as his arcade took shape. He had never seen an arcade before, his daughter says.

Tom Nichols died in 1933 and his son James and daughter Dora (Mrs. Herbert) became joint owners of the arcade. James is now dead and his share is owned by his two sons, who live in California. Wilson White real estate company manages the arcade for the owners.

Nickels Arcade was designed by a local architect Herman Pipp of Arch Street. Building contractors A. R. Cole and Co. of East Liberty and the safes and vault equipment in the Farmers and Mechanics Bank were installed by Herring Hall Marvin Safe Co. of Hamilton, Ohio.

The structure is fireproof –  built of steel, concrete and brick, with the featured skylight. There are 18 shops – now occupied by 16 establishments – along with 265-feet tiled passageway.

Above the shops on each side are second floors of the shops. And at the State Street end only, there is a small third floor on each side.

When the arcade was built, a single pipe steam heating system was installed. It was fired by a stoker-fed boiler. Today the same boiler and pipes heat the arcade every winter. The only change is that gas now fuels the system.

First to move into the newly completed arcade building for the Farmers and Mechanics Bank and, probably above it, Roy P.  Henry, tailor. They are listed in the 1916 city directory, which states that the rest of the arcade, 326–328 State Street was under construction.

The Arcade Theater opened in 1915, but this was not actually a part of Nickels Arcade. Located on N. University, its name must have been chosen for its tropical nature.

The 1917 city directory shows several occupants of offices in the arcade building, although many offices were still vacant and only the post office and moved into a ground floor shop. The arcade Post office substation substation has been there ever since.

Among upstairs tenants was the Amateur Finishing Syndicate, which sold cameras and photographic supplies. It was run by Reginald D. McNitt and the business took his name after it moved into a downstairs shop in 1918. The syndicate also ran Kodak or Arcade Florist for its short life. They close down in 1920, when another florist business moved into the arcade.

Arthur W. Schurz, dentist, was also a 1917 arcade office tenant as was Arcade Reality Co., run by Margaret E Waples and Maude M. Bisell. The latter lasted only a year in the arcade, although Margaret Waples returned in 1919 to run an art goods shop. In accounting firm and a book shop also hell Arcade offices in 1917, but both remain for only a year.

Another new tenant in 1917 which position Bishop R. Canfield, who moved into the office above the Farmers and Mechanics Bank. A year later he was joined by Albert C. Furstenberg, then a 28-year-old who spent some of his time teaching otolaryngology at U-M. Furstenberg was later to be dean of the University’s medical school for 24 years and the recently opened Furstenberg Student Study Center was named for him.

By the time the 1918 city directory was compiled, several of the arcade’s ground level shops had occupants. The first, according to Mrs. Herbert, was Carl F Bay, jeweler, whose business is still there. He was followed by bookseller Thomas I. Biddle.

Do we got to go notable among others were barbers Myron A Baker and Rio O. Tague, who set up a shop that has since changed hands several times, but never changed its business.

Another long-standing name still to be seen in the arcade it’s Betsy Ross. W. Franklin Ray didn’t actually use this name for his candy shop until 1920, although he moved into the arcade in 1918. It wasn’t till the 1940s that the business was expanded to include the restaurant which now bears the Betsy Ross name.

Clarence J Fingerle’s arcade Cafeteria first appeared in 1918. The cafeteria was on the southside second floor, and Mrs. Herbert recalls that it was very popular for years. end it certainly would be today if it were to reopen and once again, as on a Sunday in 1920, sell creamed shredded chicken and dumplings for 40 cents or baked Virginia ham for 35 cents.

The Educators Association, Fuller Brush Co., realtors, a dentist , an  investment company, and shoes and gown shops were other new 1918 tenants of Nickels Arcade, as were Mary E Dearing and Mrs. Lefie Ross, who began a Christian Scientist Reading Room.

1919 so if you were changes in the arcade.  O.D. Morrill, typewriter sellers and repairers, came in, as did Margaret Waples with her art goods. And no fewer than seven fraternities took up occupancy of arcade offices during the year.

By 1920s the arcade was almost fully occupied, we’re just one shop and five office is vacant. One interesting new tenant that year was the Ann Arbor Steam Dye works.

But not all the arcades best known occupants over the years were there by 1920. One Mrs. Herbert remembers well was the Roy Hoyer dance studio, which moved in above the Post Office in 1934.

“Most of the older people around town that had kids will go up there and learn to tap dance or whatever. My kids learn there,“ says Mrs. Herbert.

She also mentions the Musicians Union and the Red Cross as long-term tenants. And three other current occupants of Nickels Arcade have been there many years.

Van Boven’s inc., with its clothing store on thern arcade’s State Street end — Where J. H. Nickels Meat Market Once was — and it’s shoe store and office within the arcade, first rented space in the arcade in the mid-1920’s. In the early 1930s the Caravan Shop moved to the place it’s still occupies, opposite the post office. Van Boven Shop moved to the place which sells women’s wear, has been in the arcade since the mid-1930’s.

What’s more, all three took over from similar businesses in the same shops.

The Farmers and Mechanics Banks branch is, of course, no longer to be found at the State Street end of the arcade, although its vaults are still in the basement.

In August, 1960, the branch moved to Liberty Street. But ownership of its section of the arcade changed hands several times before it was finally bought by the owners of the rest of the arcade.

Nickels Arcade is, perhaps, no longer the only arcade in Ann Arbor. Many would also call some of our modern shopping malls arcades, although technically they’re not unless the passageway roof is arched.

But you need to the city or not, Nickels arcade is certainly different from the others. With its newsstand set up daily at the State Street end passageway, its occasional informal concerts from music students, and its small hanging shop signs (Restricted in size by the management), this arcade has a charm unmatched by any of Ann Arbor‘s newer shopping malls.