Blues Festival Back On - In Windsor This time 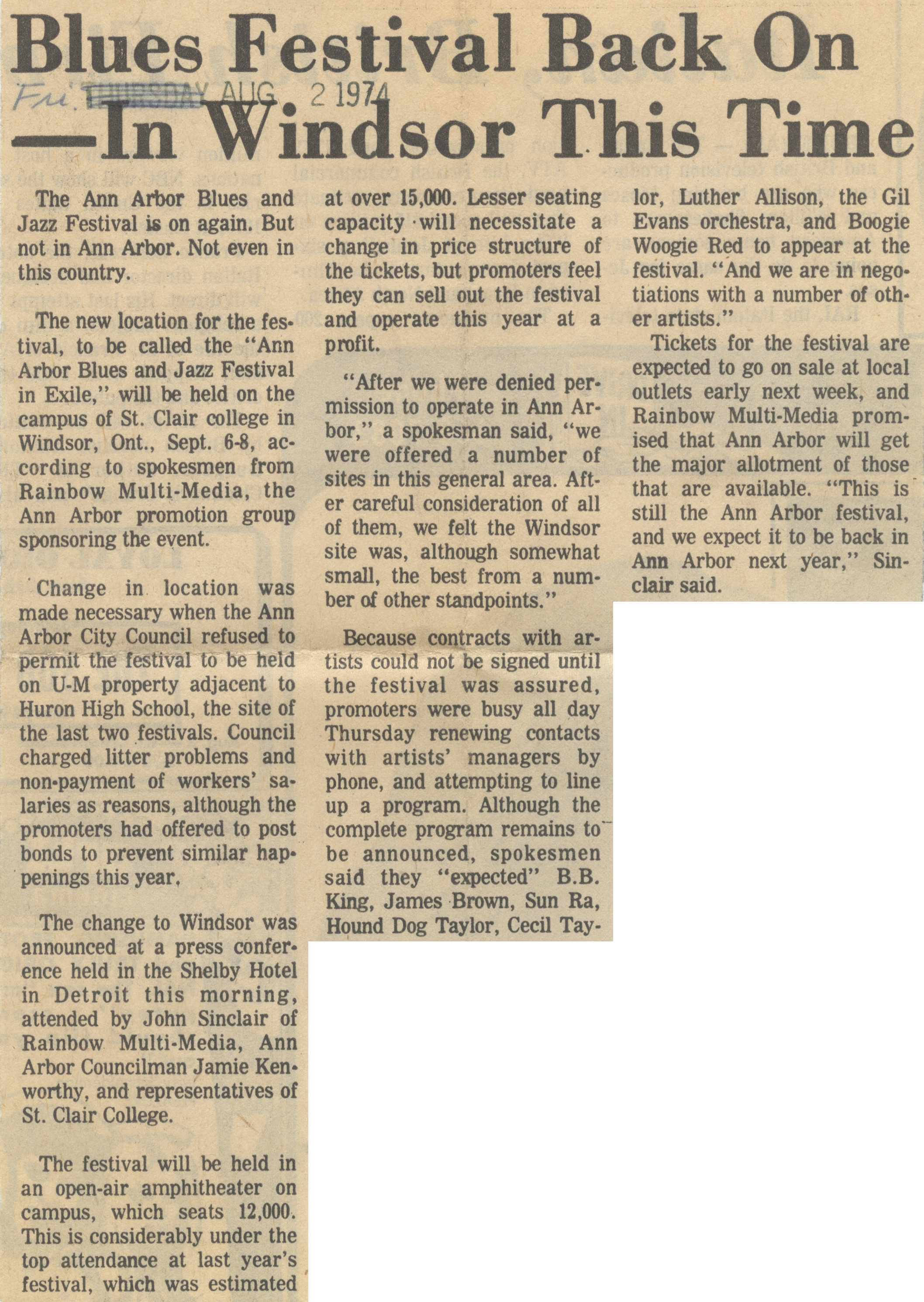 ﻿Blues Festival Back On —In Windsor This Time

The Ann Arbor Blues and Jazz Festival is on again. But not in Ann Arbor. Not even in this country.

The new location for the festival, to be called the “Ann Arbor Blues and Jazz Festival in Exile,” will be held on the campus of St. Clair college in Windsor, Ont., Sept. 6-8, according to spokesmen from Rainbow Multi-Media, the Ann Arbor promotion group sponsoring the event.

Change in location was made necessary when the Ann Arbor City Council refused to permit the festival to be held on U-M property adjacent to Huron High School, the site of the last two festivals. Council charged litter problems and non-payment of workers’ salaries as reasons, although the promoters had offered to post bonds to prevent similar happenings this year.

The change to Windsor was announced at a press conference held in the Shelby Hotel in Detroit this morning, attended by John Sinclair of Rainbow Multi-Media, Ann Arbor Councilman Jamie Kenworthy, and representatives of St. Clair College.

The festival will be held in an open-air amphitheater on campus, which seats 12,000. This is considerably under the top attendance at last year’s festival, which was estimated at over 15,000. Lesser seating capacity will necessitate a change in price structure of the tickets, but promoters feel they can sell out the festival and operate this year at a profit.

“After we were denied permission to operate in Ann Arbor,” a spokesman said, “we were offered a number of sites in this general area. After careful consideration of all of them, we felt the Windsor site was, although somewhat small, the best from a number of other standpoints.”

Because contracts with artists could not be signed until the festival was assured, promoters were busy all day Thursday renewing contacts with artists’ managers by phone, and attempting to line up a program. Although the complete program remains to' be announced, spokesmen said they “expected” B.B. King, James Brown, Sun Ra, Hound Dog Taylor, Cecil Taylor, Luther Allison, the Gil Evans orchestra, and Boogie Woogie Red to appear at the festival. “And we are in negotiations with a number of other artists.”

Tickets for the festival are expected to go on sale at local outlets early next week, and Rainbow Multi-Media promised that Ann Arbor will get the major allotment of those that are available. “This is still the Ann Arbor festival, and we expect it to be back in Ann Arbor next year,” Sinclair said.