Fair's Beautiful, But Oh, That Food! 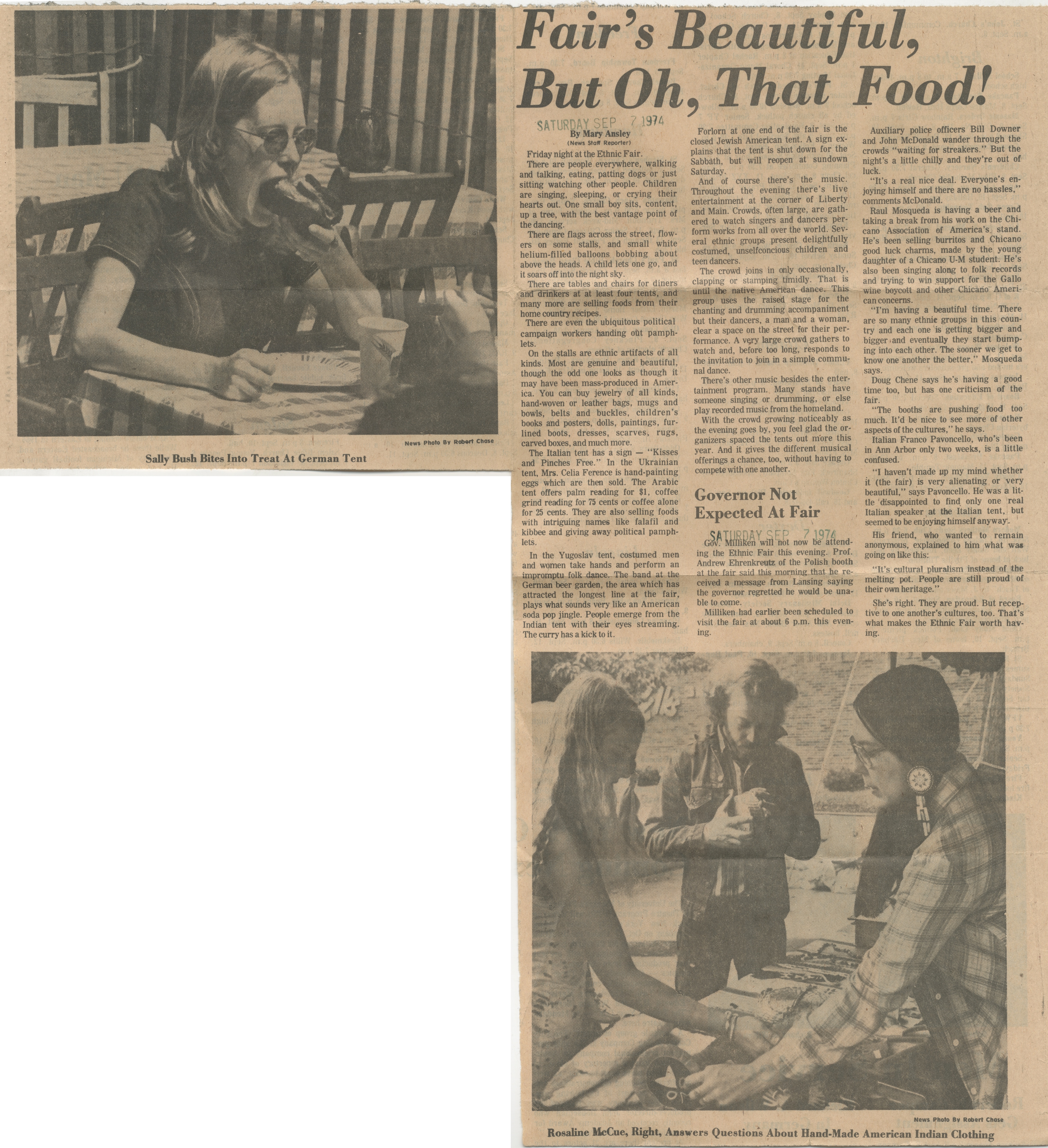 Fair’s Beautiful, But Oh, That Food!

Friday night at the Ethnic Fair.

There are people everywhere, walking and talking, eating, patting dogs or just sitting watching other people. Children are singing, sleeping, or crying their hearts out. One small boy sits, content, up a tree, with the best vantage point of the dancing.

There are flags across the street, flowers on some stalls, and small white helium-filled balloons bobbing about above the heads. A child lets one go, and it soars off into the night sky.

There are tables and chairs for diners and drinkers at at least four tents, and many more are selling foods from their home country recipes.

There are even the ubiquitous political campaign workers handing out pamphlets.

On the stalls are ethnic artifacts of all kinds. Most are genuine and beautiful, though the odd one looks as though it may have been mass-produced in America. You can buy jewelry of all kinds, hand-woven or leather bags, mugs and bowls, belts and buckles, children's books and posters, dolls, paintings, fur-lined boots, dresses, scarves, rugs, carved boxes, and much more.

The Italian tent has a sign — "Kisses and Pinches Free." In the Ukrainian tent, Mrs. Celia Ference is hand-painting eggs which are then sold. The Arabic tent offers palm reading for $1, coffee grind reading for 75 cents or coffee alone for 25 cents. They are also selling foods with intriguing names like falafil and kibbee and giving away political pamphlets.

In the Yugoslav tent, costumed men and women take hands and perform an impromptu folk dance. The band at the German beer garden, the area which has attracted the longest line at the fair, plays what sounds very like an American soda pop jingle. People emerge from the Indian tent with their eyes streaming. The curry has a kick to it.

Forlorn at one end of the fair is the closed Jewish American tent. A sign explains that the tent is shut down for the Sabbath, but will reopen at sundown Saturday.

And of course there's the music.

Throughout the evening there's live entertainment at the corner of Liberty and Main. Crowds, often large, are gathered to watch singers and dancers perform works from all over the world. Several ethnic groups present delightfully costumed, unselfconcious children and teen dancers.

The crowd joins in only occasionally, clapping or stamping timidly. That is until the native American dance. This group uses the raised stage for the chanting and drumming accompaniment but their dancers, a man and a woman, clear a space on the street for their performance. A very large crowd gathers to watch and, before too long, responds to the invitation to join in a simple communal dance.

There’s other music besides the entertainment program. Many stands have someone singing or drumming, or else play recorded music from the homeland.

With the crowd growing noticeably as the evening goes by, you feel glad the organizers spaced the tents out more this year. And it gives the different musical offerings a chance, too, without having to compete with one another.

Governor Not Expected At Fair

Gov. Milliken will not be attending the Ethnic Fair this evening. Prof. Andrew Ehrenkreutz of the Polish booth at the fair said this morning that he received a message from Lansing saying the governor regretted he would be unable to come.
Milliken had earlier been scheduled to visit the fair at about 6 p. m. this evening.

Auxiliary police officers Bill Downer and John McDonald wander through the crowds “waiting for streakers.” But the night’s a little chilly and they're out of luck.

"It's a real nice deal. Everyone’s enjoying himself and there are no hassles," comments McDonald.

Raul Mosqueda is having a beer and taking a break from his work on the Chicano Association of America's, stand. He's been selling burritos and Chicano good luck charms, made by the young daughter of a Chicano U-M student. He’s also been singing along to folk records and trying to win support for the Gallo wine boycott and other Chicano American concerns.

“I’m having a beautiful time. There are so many ethnic groups in this country and each one is getting bigger and bigger and eventually they start bumping into each other. The sooner we get to know one another the better," Mosqueda says.

Doug Chene says he'd having a good time too,but has one criticism of the fair.

"The booths are pushing food too much. It’d be nice to see more of other aspects of the cultures.” he says.

Italian Franco Pavoncello, who’s been in Ann Arbor only two weeks, is a little confused.

“I haven’t made up my mind whether it (the fair) is very alienating or very beautiful,” says Pavoncello. He was a little disappointed to find only one real Italian speaker at the Italian tent, but seemed to be enjoying himself anyway.

His friend, who wanted to remain anonymous, explained to him what was going on like this:

"It's cultural pluralism instead of the melting pot. People are still proud of their own heritage."

She's right. They are proud. But receptive to one another’s cultures, too. That's what makes the Ethnic Fair worth having.