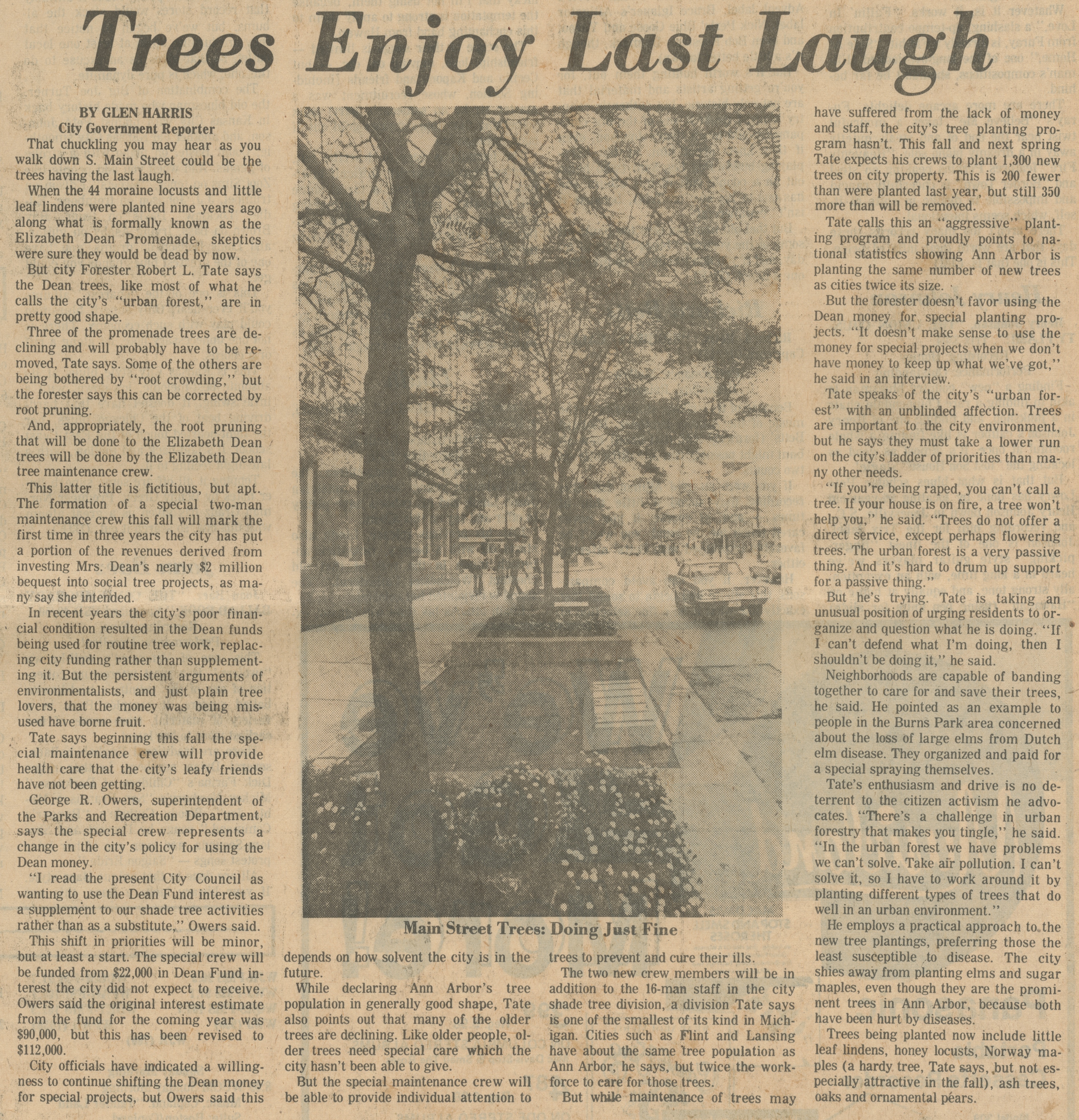 That chuckling you may hear as you walk down S. Main Street could be the trees having the last laugh.

When the 44 moraine locusts and little leaf lindens were planted nine years ago along what is formally known as the Elizabeth Dean Promenade, skeptics were sure they would be dead by now.

But city Forester Robert L. Tate says the Dean trees, like most of what he calls the city’s “urban forest," are in pretty good shape.

Three of the promenade trees are declining and will probably have to be removed, Tate says. Some of the others are being bothered by "root crowding," but the forester says this can be corrected by root pruning.

This latter title is fictitious, but apt. The formation of a special two-man maintenance crew this fall will mark the first time in three years the city has put a portion of the revenues derived from investing Mrs. Dean's nearly $2 million bequest into social tree projects, as many say she intended.

In recent years the city’s poor financial condition resulted in the Dean funds being used for routine tree work, replacing city funding rather than supplementing it. But the persistent arguments of environmentalists, and just plain tree lovers, that the money was being misused have borne fruit.

Tate says beginning this fall the special maintenance crew will provide health care that the city's leafy friends have not been getting.

George R. Owers, superintendent of the Parks and Recreation Department, says the special crew represents a change in the city's policy for using the Dean money.

“I read the present City Council as wanting to use the Dean Fund interest as a supplement to our shade tree activities rather than as a substitute,” Owers said.

This shift in priorities will be minor, but at least a start. The special crew will be funded from $22,000 in Dean Fund interest the city did not expect to receive. Owers said the original interest estimate from the fund for the coming year was $90,000, but this has been revised to $112,000.

City officials have indicated a willingness to continue shifting the Dean money for special projects, but Owers said this

have suffered from the lack of money and staff, the city’s tree planting program hasn’t. This fall and next spring Tate expects his crews to plant 1,300 new trees on city property. This is 200 fewer than were planted last year, but still 350 more than will be removed.

Tate calls this an “aggressive", planting program and proudly points to national statistics showing Ann Arbor is planting the same number of new trees as cities twice its size.

Tate speaks of the city's “urban forest” with an unblinded affection. Trees are important to the city environment, but he says they must take a lower run on the city’s ladder of priorities than many other needs.

"If you’re being raped, you can’t call a tree. If your house is on fire, a tree won’t help you,” he said. “Trees do not offer a direct service, except perhaps flowering trees. The urban forest is a very passive thing. And it’s hard to drum up support for a passive thing.”

But he’s trying. Tate is taking an unusual position of urging residents to organize and question what he is doing. "If I can’t defend what I’m doing, then I shouldn’t be doing it," he said.

Neighborhoods are capable of banding together to care for and save their trees, he said. He pointed as an example to people in the Burns Park area concerned about the loss of large elms from Dutch elm disease. They organized and paid for a special spraying themselves.

Tate’s enthusiasm and drive is no deterrent to the citizen activism he advocates. “There’s a challenge in urban forestry that makes you tingle,” he said. “In the urban forest we have problems we can’t solve. Take air pollution. I can’t solve it, so I have to work around it by planting different types of trees that do well in an urban environment.”

He employs a practical approach to. the new tree plantings, preferring those the least susceptible to disease. The city shies away from planting elms and sugar maples, even though they are the prominent trees in Ann Arbor, because both have been hurt by diseases.